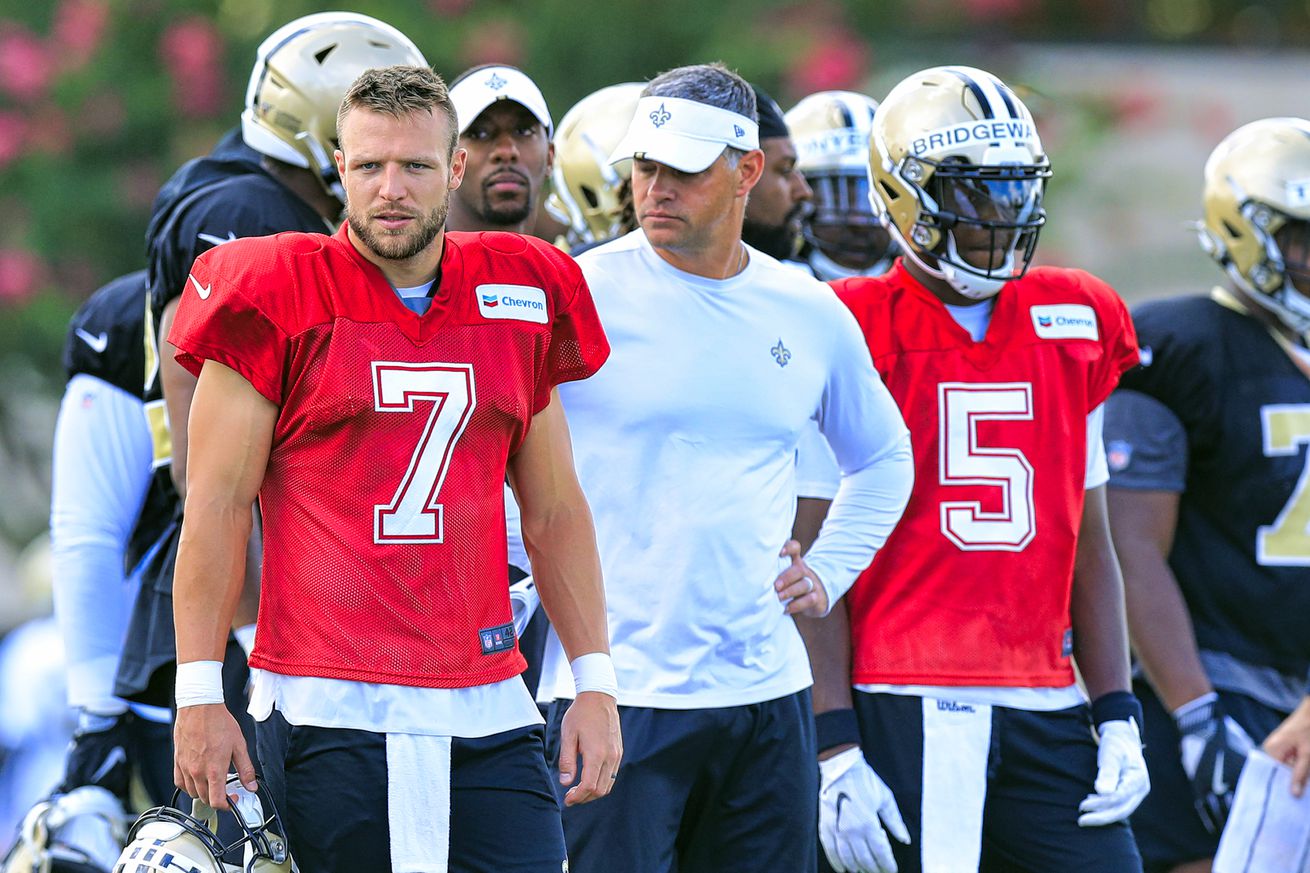 Could either one of them be Drew Brees’ potential successor?

The Saints are set at starting quarterback for 2019. Drew Brees was his typical all-world self for most of his previous year. While the now 40-year-old’s level of play declined late in the season, he still managed to record a league- and career-high 115.7 passer rating and led his team within one blown pass interference call of the Super Bowl.

But if Brees goes down, New Orleans has the backup ballast it needs to stay afloat.

The quadragenarian quarterback sits atop a depth chart that features a former Pro Bowler in Teddy Bridgewater. This offseason, Bridgewater re-signed with the Saints on a one-year deal, allowing him to continue to rebuild his value following 2016’s catastrophic knee injury while keeping his name in the mix as Brees’ possible successor.

Those plans may not come to fruition if Taysom Hill can look as good as he did in preseason Week 2. The former BYU star has turned heads as an electric special teamer and gadget-play specialist in his first two seasons in the league, but his performance against a smattering of Chargers backups lends credibility to his passing game.

Hill completed 11 of his 15 passes for 136 yards and threw for each of the Saints’ two touchdowns. He added a game-high 53 rush yards. Despite not entering the game until the second quarter, the third-string passer was responsible for 58 percent of his team’s total offense.

That raises an important preseason question.

Hill, a player with zero career starts at quarterback and seven NFL pass attempts, is an intriguing unknown for New Orleans. His athleticism and ability to pick up new facets of the pro game have kept him on the Saints’ active roster in each of the past two seasons. He’s listed on the roster as a QB, but he’s made his impact felt everywhere from the backfield to special teams.

When Taysom Hill is in the game, you should know the zone read is coming and that he will likely keep it no matter what. And that he can run over defenders like Landon Collins.

Like the arc block by the TE here. pic.twitter.com/f3kW4zxBHi

This preseason has shown how this versatile approach informs his play behind center. Hill’s big performance against the Chargers was a combination of exploiting their many defensive deficiencies and finding a way to spin sugar into cotton candy. His first touchdown strike was a pass to an inexplicably wide open Austin Carr, but his on-target placement allowed it to be a walk-in touchdown instead of a first-and-goal situation.

Hill’s second touchdown saw him use the mobility and speed to avoid an oncoming rush and connect with tailback Devine Ozigbo.

OZIGBO!@T_Hill4 marches it down the field for the score ⚜️ pic.twitter.com/Jg5i3rb3Wm

The biggest takeaway from that performance was Hill’s ability to find and hit open windows downfield. It’s only one game, however, and consistency hasn’t exactly been a calling card for the young passer.

Accuracy was a problem for the BYU product dating back to his college days, where he completed just 58 percent of his passes. He threw only 12 more touchdowns than interceptions in that span. While he made up for it with his legs — Hill scored 32 rushing touchdowns as a Cougar — those lapses appeared to create a low ceiling as an NFL passer.

Hill vacillated between good and bad performances in stretches at BYU. Hoping for him to put these issues in his rearview in 2019 may be unrealistic thanks to his advanced age. After two years on an LDS mission out of high school, five seasons at BYU, and two in the NFL, Hill will be 29 years old this season. That’s two years older than the man he’s battling for backup reps in New Orleans.

One good preseason game isn’t enough to call Hill a bonafide QB2. Especially when the man ahead of him on the depth chart was similarly effective just a week earlier. Bridgewater was hot garbage against the Chargers (5-of-12 passing with an interception), but he was steady in his preseason opener. He finished a two-quarter outing versus his former Vikings teammates with 134 yards and a touchdown, bolstering his case as one of the league’s most valuable backups.

That argument earned a major boost last August. Bridgewater’s knee injury led to his egress from Minnesota in 2019. He landed in the AFC East with the opportunity to take the reins as the Jets’ starting quarterback. Those plans were waylaid when the Jets took Sam Darnold with the third overall pick. Despite that, Bridgewater showed out enough in the preseason to convince the Saints to trade a third-round pick for his services.

Though that move failed to create the launchpad Bridgewater had been hoping for in his run-up to free agency in 2019, he impressed enough that New Orleans kept him around. The young veteran earned his first start since 2015 in a meaningless Week 17 game against the Panthers. It wasn’t a revelation from Bridgewater, though. He underwhelmed in a 22-pass, 118-yard performance — one in which Hill scored a 9-yard rushing touchdown as a wildcat-esque quarterback in the fourth quarter.

Despite the disappointing outing, Bridgewater has a higher NFL baseline than Hill, though it’s unclear if he’ll ever be able to reach it again. He was a Pro Bowl selection for Minnesota in his second season in the league, but though Bridgewater only threw 14 touchdown passes in 16 outings that year. Even so, he was a stable leader who was responsible for four game-winning drives in his first two seasons as a pro. His composition in the pocket portended future success.

Pre-injury Bridgewater was accurate but could also be unexciting in stretches. He overcame a steep learning curve — he’d started 28 of the Vikings first 32 games after being drafted in 2014 — and an understocked receiving corps (his top wideouts were an aging Greg Jennings and a not-yet-prime Stefon Diggs). There’s still reason to believe Bridgewater can be a starting-caliber quarterback even with the diminished mobility that followed years of rehabilitation for a devastated knee.

While Bridgewater could use his agility to avoid pressure in the pocket and spring for big plays before his injury, he wasn’t exactly a dual-threat passer. He was sacked on nearly nine percent of his dropbacks in Minnesota. He ran for just 0.8 yards per rush (after sacks) in three seasons at Louisville. Though he scored four touchdowns on the ground in his first two seasons in the NFL, his best and most sustainable work came while stepping up as pass rushers orbited around him.

Last year’s Week 17 loss to the Panthers gives us a little more background on what 2019 Teddy Bridgewater would look like as a starter in a meaningful game, but it’s still not an open and shut case. We know Bridgewater had the chops to be a starter on a playoff team four years ago. We also know he was the league’s hottest quarterback in the preseason of 2018 — and that led to a one-year, $7.25 million deal to remain on a Saints roster, where he had no chance to compete for a starting role.

This leaves New Orleans with a good problem to have

The Saints have two potential avenues for replacing an aging Hall of Fame quarterback without burning a Day 1 draft pick. Both roads are winding, bumpy, and may ultimately lead to dead ends. Bridgewater may never reach the slightly-above-average heights of his sophomore NFL season.

Hill’s ceiling is likely closer to that of Joe Webb — another converted quarterback who has done a little bit of everything in a nine-year NFL career — than as a worthy successor to Drew Brees. That’s not a bad thing! It’s just not as exciting as a low-yield backup developing into a starter four years after he was cleared to legally rent a car.

Head coach Sean Payton says he’s still evaluating each of his backup passers, but only Hill has been compared to a Hall of Famer this preseason.

“If you look back at Steve [Young]’s career, people don’t remember the time before he came to the NFL, you have a very athletic player that, I think, advanced when he got to San Francisco,” said Payton. “He always had great ability with his legs, so you’re trying to create visions for players, and that’s no different than how you’d evaluate how we see Teddy Bridgewater progressing and what we think he can be.”

That’s a lofty expectation for a third-string quarterback. Hill showed us all what that looks like on a good day, but that was only one game. Payton won’t have to look too far for a reminder that a stellar preseason doesn’t portend regular season success. That’s a lesson Bridgewater understands all too well.

The good news is New Orleans has all of 2019 to sort this out. If the second- and third-string quarterbacks have already hit their peaks, they still hold significant value. In the meantime, Bridgewater can settle into a traditional backup role while Hill takes the field for whatever high-impact gadgetry the Saints can think up.

They’re a first-rate insurance policy capable of staying in the race as potential Brees successors — even if a long shot.

If anything happens to Drew Brees, Payton will have some options. No matter who he chooses, it’ll be exciting.