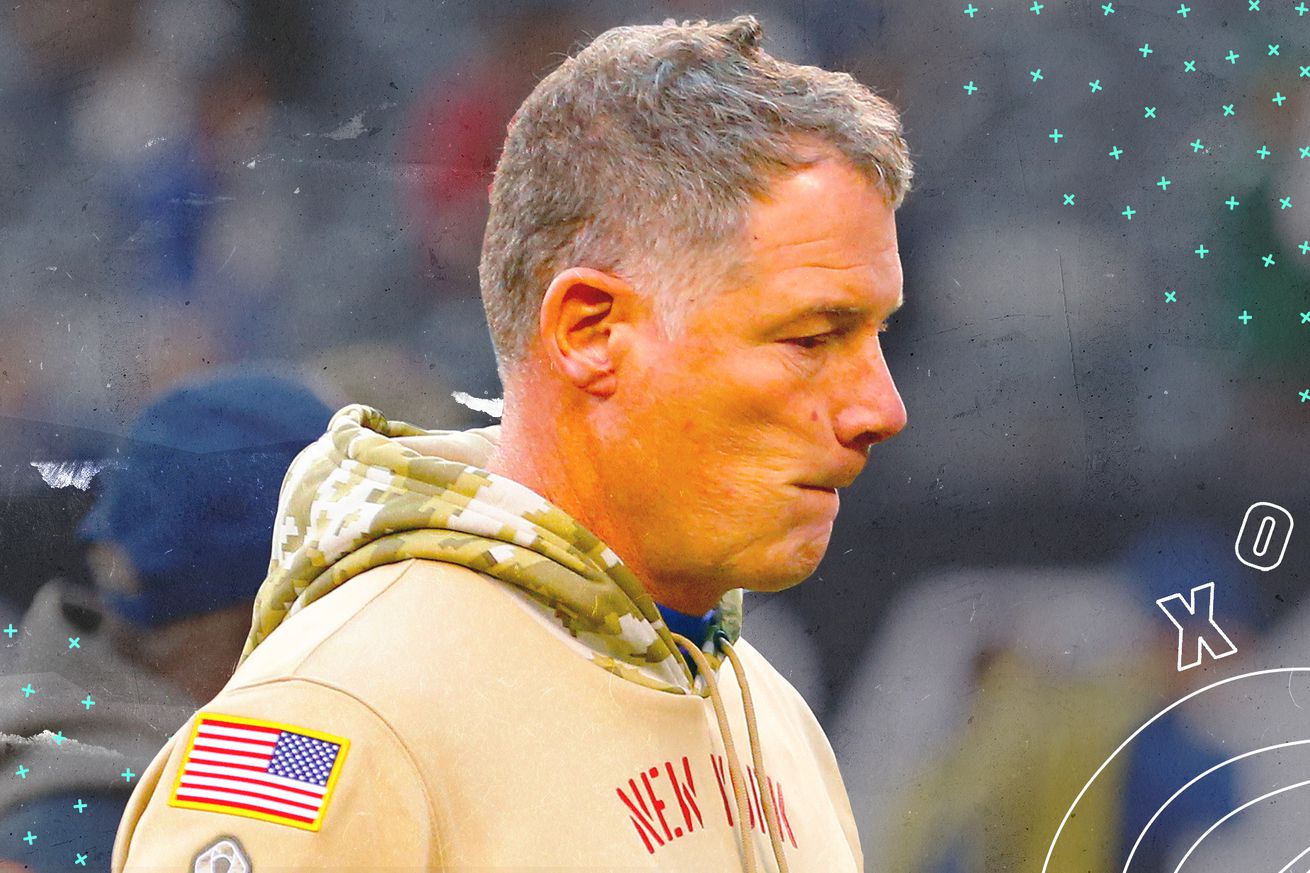 Giants head coach Pat Shurmur is on the hot seat after a loss to the Jets.

Jason Garrett joins the crowd — and we’ve got a new No. 1.

Week 10 of the 2019 season was a great one for underdogs — and a big lift for the hot seat coaches in dire need of wins.

The Jets dispatched the Giants to throw some ice on Adam Gase’s hot seat. The Browns messed around for three quarters but still found a way to beat the Bills. Mike Vrabel kept his team alive in the AFC playoff race with a comeback win over reigning MVP Patrick Mahomes and the Chiefs.

That led to some changes in the fireable coach rankings. While victory was enough to keep Gase, Kitchens, and Falcons coach Dan Quinn from the top spot, it couldn’t spare them from the top five this week. And while other sideline generals like Anthony Lynn (Chargers), Doug Marrone (Jaguars), and Matt Patricia (Lions) merited debate about their futures, they’re all still relatively safe compared to their foundering peers.

Who made the list as the NFL barrels into the tail end of its season? Here are the league’s most fireable coaches after Week 10. Let’s start with a guy who probably won’t get the ax this winter (but, if we’re going by results, probably should).

The good news: Gase’s Jets got a win. The better news: Gase appears to be getting a second year in New York no matter how badly he blows it in 2019.

The bad news: Gase’s second win in green and white came against the 2-8 Giants, and his team blew a 14-0 lead before making a comeback to claim superiority in the Battle of Who Couldn’t Care Less. His progress in New York all hinges on his ability to improve an offense that’s only ranked higher than 23rd in the NFL in points scored once since 2012. He got a season-high 34 points in Week 10, which is good! Only three of his touchdowns came from the offensive side of the ball, however, pushing that unit’s output to 11 in nine games this fall. That’s bad!

New York actually gained fewer yards in Sunday’s win (294) than it had in the previous week’s loss to the Dolphins. Six different quarterbacks (out of a possible 22) out-gained the Jets in Week 10, including Daniel Jones. There were positives from the game — New York failed to turn the ball over for the first time all year and an often toothless pass rush notched a season-high six sacks. Still, this team is far from fixed.

Gase has a little extra leeway since this is his first season with the Jets, and beating the Giants kept him from the top spot on this list. He’ll face Washington and Cincinnati in two of the next three weeks, however. A loss against either could make owner Christopher Johnson rethink his edict that his rookie head coach will see a year two.

Garrett makes his debut on this list as the only man currently leading a team with a winning record. While his Cowboys are 5-4 and would have a reserved spot in the playoffs if the season ended today, he’s failed to generate any significant progress over the last four years. His 2019 team looks every bit a paper tiger; only one of its five wins has come against a team with more than two victories.

Dallas’ flaws were on full display in a Sunday night clash against the Vikings — a team that’s been this season’s dividing line between contenders and pretenders. The defense allowed Kirk Cousins and Dalvin Cook to do just enough to keep Minnesota in front. Dak Prescott threw for 397 yards and three touchdowns, but was often overruled by coaching decisions that opted to establish a ground game that never found its rhythm:

On 1st down the #Cowboys:

Dallas continues to be haunted by the lingering feeling the team could have done more. Some bad playcalling and worse execution in the red zone meant two fourth-quarter drives stalled inside the Vikings’ 15-yard line, leading to three total points. Garrett refused to go for it on fourth-and-reasonable from both the Minnesota 40- and 39-yard lines. He gave up a massive chunk of yardage before a last-ditch drive in order to save a few seconds of game clock by telling Tavon Austin to fair catch an extremely returnable punt:

That continuing theme is what threatens to oust Garrett despite another year at the top of his division. The 10th-year head coach has one of the league’s most talented — and top-heavy — rosters. He’s got a blossoming young quarterback, an All-Pro tailback who remains one of the league’s most dangerous runners, and a defense led by players that range from high-priced veterans (DeMarcus Lawrence, Robert Quinn) to emerging young stars (Byron Jones, Leighton Vander Esch).

Despite all that, he’s one game over .500 and in danger of falling from the playoff race entirely if he can’t win the NFC East.

Kitchens threw a wrench into the gears of the Bills’ postseason machine with a potent defensive effort that kept Buffalo from completing a single pass in the red zone. Granted, Josh Allen’s budding crapulence played as much of a role in that as Cleveland did, but it was still an encouraging step forward for a team in desperate need of some momentum.

That said, this was still a rough performance for the Browns’ hamstrung offense. They ran 12 plays from within the Buffalo 5-yard line Sunday. Including penalties, those dozen snaps gained a net -7 yards and scored three points. Even if Kitchens wasn’t happy with the result, he’s going to stick to the line of thought that got him there.

“I thought those guys did a good job of overcoming that,” Kitchens told the press when asked about how frustrating the Bills’ litany of goal-line stops had been. “If we get down there again, I’m running it again … I need to call better plays when we get down [to the goal line], but I’m telling you now we’re running the ball when we get down there.”

Kitchens’ problem isn’t just unimaginative playcalling. He’s also oscillated between wasting timeouts and burning yardage to save them. His freewheeling style has led to plot holes in his playbook. He shifts philosophies mid-game with no real rhyme or reason behind his choices. This is all a very Browns way to do things, and his 3-6 record bears that out.

Still, he got a win that could knock a potential playoff team out of the postseason. That buys him some time.

The Falcons, at 2-7, are still screwed. BUT! They found a way to drag an arch-rival into the muck with them while potentially derailing the Saints’ bid for a postseason bye.

Atlanta was a two-touchdown underdog when it traveled to New Orleans, then strode out of Louisiana with a dominant 26-9 win. The Falcons held the NFC South leaders to just three conversions on 15 third- or fourth-down attempts, effectively stymying the Saints and giving fans back in Georgia a small taste of what could have been in a lost season.

Quinn still has time to rally the troops and give owner Arthur Blank a reason to keep him employed. Toppling New Orleans was a good start, but it’s likely he’s dug himself too deep a hole to climb out of after winning just one of his first eight games.

Shurmur not only lost Sunday — he lost to another member of this list. New York couldn’t find the extra gear to put away Gase and a struggling Jets team. That may be the final ignominy in a Giants career filled with them. Shurmur’s team has now lost six straight games. Half of those defeats came against teams with losing records.

Team owner John Mara has remained tight-lipped on any upcoming organizational changes, but he may not have to say much to make his displeasure clear.

saw john mara very briefly after the game. mad doesn’t even begin to describe the look on his face https://t.co/Y3yVGezh5o

The Giants’ history suggests it will retain protocol and wait until the end of the season to install a new coach — the only midseason coach firing the franchise has done in the past three decades came in the middle of Ben McAdoo’s 2017 hatchet job. That means Shurmur’s got six games left to prove he can provide a tangible reason for optimism in New York.

His best bet is to continue to develop Daniel Jones. Jones was potent through the air in Week 10, becoming just the third player since 2000 to throw four touchdown passes in multiple games as a rookie. He was also a big negative in the pocket, as his three fumbles pushed his total to 10 in the last four games. I ranked them — they’re all bad!

That task is going to be even more difficult considering how banged up the Giants’ playmaking corps are. Evan Engram and Sterling Shepard are both working through maladies that have cost them multiple games this fall. Saquon Barkley’s nagging injuries limited him to the least efficient game of his career last week (13 carries, 1 rushing yard, and a handful of missed assignments on blitz pickups). It’s possible Shurmur’s future hangs on the efficacy of Golden Tate (good!), Darius Slayton (manageable?), and Wayne Gallman (oh boy) through the final two months of the season.