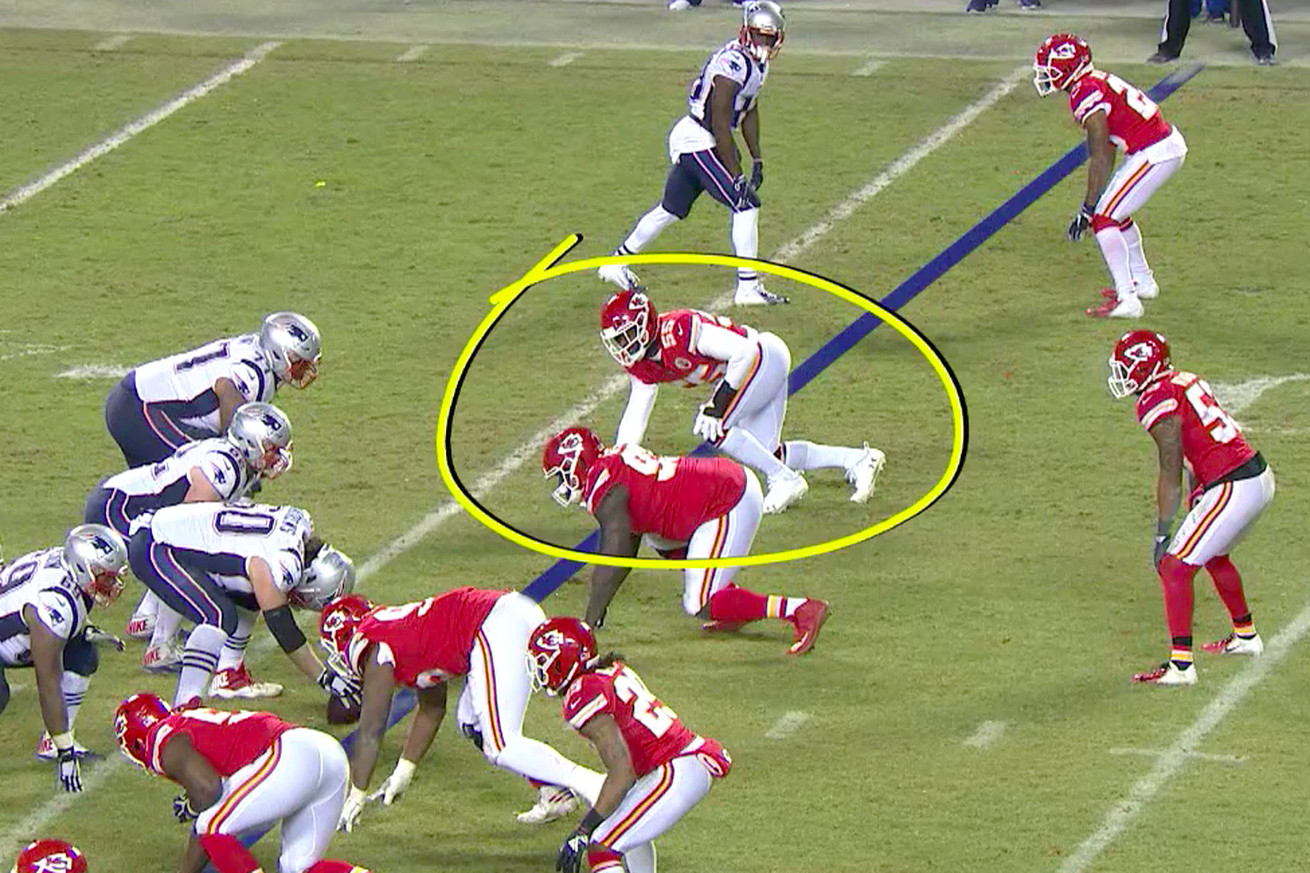 Tom Brady, Tyreek Hill, Todd Gurley, and Dee Ford all screwed up — but not as bad as the refs.

Sunday’s conference championship games were exhilarating. The Rams and Patriots advanced to Super Bowl 53 thanks to a combination of excellence, creativity, and perseverance.

But mostly, they just did a better job diving into the muck and coming out cleaner than their opponents on an entirely sloppy day of football. The AFC and NFC title games featured several turnovers, drops, and botched calls that swung the momentum of each game and ultimately told the world we were running 2019’s title game back to 2002 and giving the Rams another shot at Tom Brady and Bill Belichick.

This year’s conference championship games saw brain-wrinkling mistakes from stars like Tom Brady, Todd Gurley, and Tyreek Hill as each of the league’s final four teams — with the arguable exception of the Saints — seemed hell-bent of proving they could overcome their own brain farts and make it to the Super Bowl. Even more amazingly, New England and Los Angeles did. So which mistakes were the worst from a legendary Sunday of playoff football?

7. Tyreek Hill attempted to give the Chiefs a spark, lost 12 yards

Tyreek Hill is an electric playmaker and the best returner the Chiefs have had since Dante Hall roamed the sidelines at Arrowhead Stadium. And when his team needed a spark to mount a comeback against the Patriots, he decided to put his unmatched speed to the test and eschew a modest gain in exchange for the slim chance of a highlight-reel punt return that would leave the Patriots dumbfounded and ignite the crowd at Arrowhead Stadium.

This was an awful bet. New England had the angled kick well covered, and Hill had no where to go; the end result? -12 yards.

The Chiefs’ drive stalled out from there, and the resulting short field New England got following a Dustin Colquitt punt allowed the Patriots to kick a field goal — a vital three points in a game where every inch counted.

Patrick Mahomes is probably going to be named the NFL MVP for the 2018 season, and that’s largely due to his ability to extend plays and make difficult throws outside the pocket.

But running backward to escape a sack can backfire and it did early for the Chiefs. Mahomes was sacked three times in the first half and each was for a loss of at least 14 yards. The second sack came at an especially inopportune time, as it knocked Kansas City out of field goal range.

An incomplete pass would’ve set up the Chiefs with a field goal of about 40 yards. Instead the sack turned it into a 54-yard try. On a cold day at Arrowhead Stadium, Andy Reid opted for a punt instead.

Gurley had been a beast in his first two postseason games, running for 100+ yards in each of them and generally looking like an All-Pro tailback in the process. But on Sunday, he only earned four carries and three targets, and that … might have been the right move.

With the exception of a 6-yard touchdown run late in the second quarter, Gurley’s play on the field topped out at “forgettable” and occasionally sank into “awful.” He got trapped behind the line of scrimmage on rushes, missed his assignments when called to pass block, and dropped two passes — one of which led to three Saints points in the first quarter.

Gurley wound up playing less than C.J. Anderson in the NFC Championship Game, but he’s owning his own craptitude.

4. The Rams gift-wrapped the Saints their first touchdown

Los Angeles had bent but not broken early, snuffing out a pair of New Orleans scoring drives and holding the Saints to a pair of field goals to keep the Rams in this game early. That resolve faded on Drew Brees’ third drive of the game. First came a fourth-and-2 encroachment penalty that turned what could have been a momentum-killing stop or timeout-burning reset into a free set of downs when Michael Brockers fell for New Orleans’ hard count:

Michael Brockers, you big dummy. One play later, the Saints turned this free first down into a five-yard TD pass pic.twitter.com/gM4PWuZPfD

Things got worse from there. The veteran quarterback dialed up a play for third-string tight end Garrett Griffin, who ran free in the end zone for just his second NFL catch to put the home team up 13-0. And how did he get so open? Because former All-Pro Marcus Peters delivered a gorgeous pick … of his own teammate.

The Rams just ran a pick… on themselves pic.twitter.com/s46DmwTOkl

That put the Rams in a 13-0 hole … which ultimately made their comeback all the more epic.

3. Tom Brady threw the ball into double coverage in the end zone

New England had a chance to silence the raucous Arrowhead Stadium crowd early after taking a 7-0 lead and then driving to the Kansas City 1-yard line with its second drive of the evening. The Chiefs desperately needed a stop to keep from getting demoralized in the first quarter of their first-ever home game at the AFC Championship, and they got one — all thanks to an awful throw by Tom Brady.

The Patriots tried to outthink Kansas City, only to wind up caught in a trap of their own making instead. Rob Gronkowski hadn’t slipped through the line unattended after a play fake to Sony Michel; he was heavily covered by Justin Houston. And as he darted to the back of the end zone, Reggie Ragland dropped back to follow him. Brady, never outwardly considering any other options, forced a pass into coverage anyway, only for Ragland to erase New England’s scoring opportunity and energize a crowd just waiting for a big play to erupt.

2. If only Dee Ford hadn’t been offsides …

Last week, Dee Ford was a monster against the Colts and looked like he could be their secret weapon to making the Super Bowl.

Wellll, he helped one team get there, but it wasn’t the Chiefs.

With just under a minute to go and the Patriots trailing by four, Tom Brady’s pass to Rob Gronkowski slipped right through the tight end’s hands and into the waiting arms of Chiefs cornerback Charvarius Ward.

It would’ve been game over, hello Super Bowl. But there was a flag — Ford had lined up in the neutral zone:

You didn’t have to be Tony Romo — or even Stephen A. Smith — to know what was about to happen. Two plays later, the Patriots scored a touchdown. Patrick Mahomes helped the Chiefs tie it up to send the game to overtime, but then he never saw the ball again.

And for the fourth time in five years, it’s the Patriots headed to the Super Bowl.

An emotional Ford took the blame after the game, but what a gutpunch for the Chiefs.

The second half of Patriots-Chiefs appeared to go on interminably thanks to an array of replay challenges and calls where all that separated a turnover or a drop from a tide-turning play was a unit of width imperceptible to the human eye. That’s not especially problematic.

But there were still issues. Tom Brady earned a borderline roughing the passer call on a non-hit that was nearly identical to a play where Patrick Mahomes hadn’t drawn a flag minutes before.

There were also a handful of iffy spots, kinda-sorta pass interference calls (and non-calls), and a wide range of stoppages just to remind the viewers at home that the game clock was correct. Those calls were excusable and, for the most part, had little to no impact on the final outcome of the game. The NFC title game, though? Ho-ho-ho-ho-hoooolly shit.

That’s Tommylee Lewis getting three years of tap dancing lessons erased from his brain on a helmet-to-helmet hit from Nickell Robey-Coleman well before Drew Brees’ third-and-10 pass could even get to him. And while a catch may not have ensured the new set of downs that would have allowed New Orleans to salt the clock away and kick a game-winning field goal as time round down, the pass interference call Robey-Coleman’s hit clearly constituted certainly would have.

He hadn’t seen it, so I showed Nickell Robey-Coleman the replay of his hit on Tommylee Lewis. “Oh, hell yeah,” he said. “That was PI.” While admitting that, he also gave a fascinating, entirely convincing breakdown of why and how it was a smart play.

Instead, the Saints kicked their field goal and gave the ball back to the Rams, who kicked an equalizer of their own, sent the game into overtime, and drilled a 57-yard kick to advance to Super Bowl 53. Thanks, in no small part, to a completely botched no-call on clear pass interference.

One thought on “The 7 dumbest mistakes from Championship Sunday, ranked”