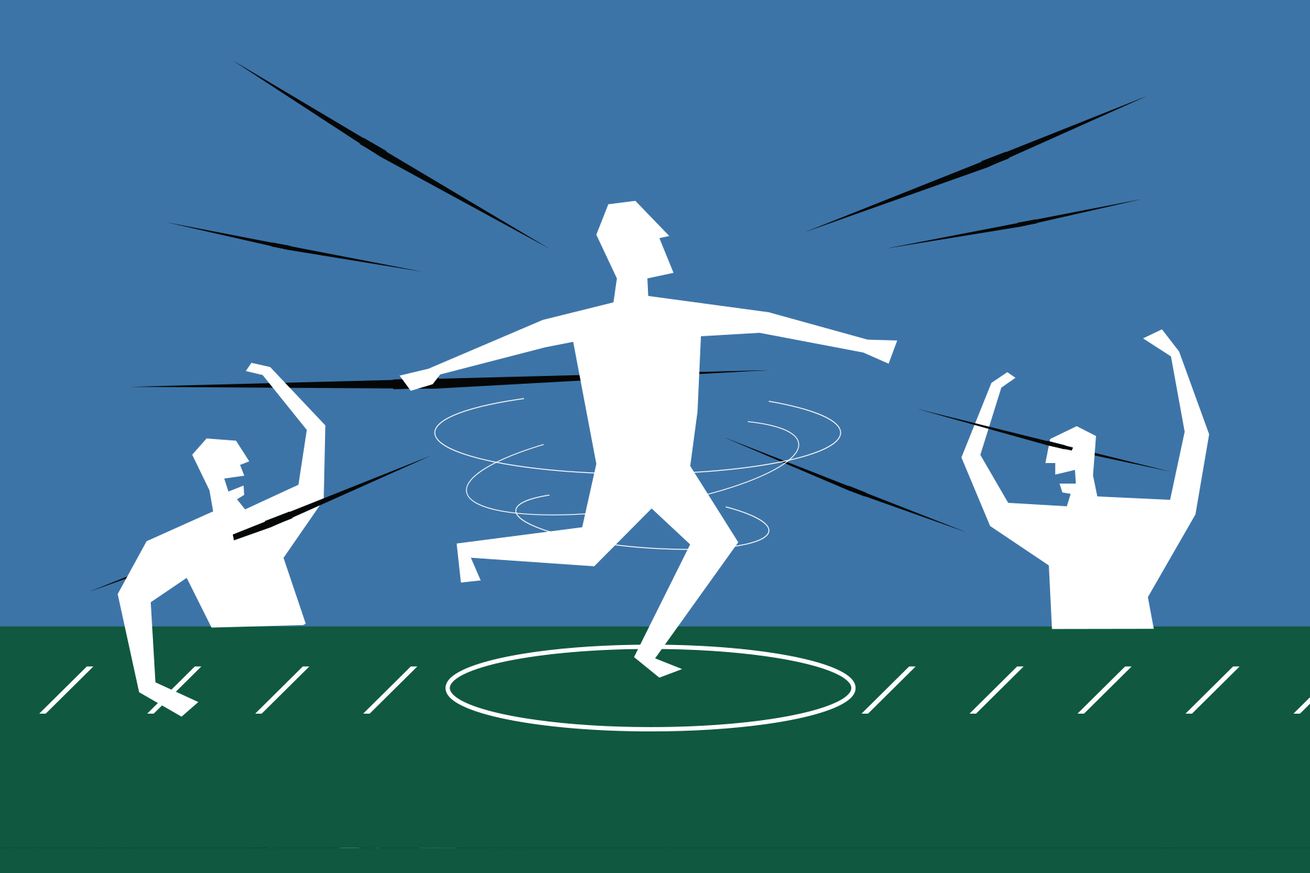 Javelin is a terrifying sport. Sports have always been a sort of proxy war, but showing off who’s best at throwing spears really far is reducing the gap a little close for comfort. Sure, there’s archery and shooting, but a) they’re not as well-incorporated into the wider world of track and field as javelin and b) they don’t carry the same sort of bodily horror as being transfixed by a javelin*. There’s a reason Vlad was the Impaler and not the Firing-Squad-Setter-Upper.

*NB: not an invitation to shoot me with either a bow or a gun.

So, yes, terrifying. And that’s when javelineers are throwing their javelins like normal people. But what happens if one day someone works out that there is a way to massively increase performance: massively increase the terror? Turns out that’s not a hypothetical, because in the mid 1950s, a man named Felix Erauzquin did exactly that.

The method? Spin around like you’re throwing a damn discus and then letting go at just the right moment. Apparently this was a traditional Basque technique. If this sounds impossibly unsafe, don’t worry. The Associated Press assures us that “each [thrower] has a pail of soapy water on hand so the spear would slip easily from the hand.” Because there’s nothing that says ‘safety’ like adding extra lubrication to a figure-skating peltast.

I am absolutely not exaggerating how terrifying this whole thing was:

Was the Erauzquin method reliable? Absolutely not. From that same AP wire: “Some time [sic] the javelin went sailing way out in front; other times it went whirling off to the side endangering spectators, and some time it just skittered along the ground 10 or twenty yards.”

But when it went right, it went really right. In the mid-50s, the world record in javelin was held by an American, Bud Held, who was hitting a shade over 80 meters. Using the new technique, Egil Danielsen claimed a 93.6m throw, and there are some suggestions that Erauzquin hit 114m. But the IAAF were having none of it: the new technique was banned for reasons of safety, and the records weren’t counted.

Erauzquin and his disciples were furious at not being allowed to take their spin-around-like-mad-tops technique to major competitions. ABC News took their side, declaring that “the new subjects of old England have lost the spirit of innovation and struggle to which their country owes so many successes and prefer to nap in the routine traditionalism of all decadences,” which strikes me as a little bit harsh.

A mere World Athletics ban wasn’t going to stop Erauzquin and friends, who opted to keep their skills sharp by taking a tour of the United States in 1957. (By then the world record was held by Danielsen, who’d landed an 85.7m throw the normal way.) And on this tour, a new star emerged: Miguel de la Quadra-Salcedo. Quadra-Salcedo would eventually go on to represent Spain in the Olympics and become a television star in his own right, but back then he was an unknown 23-year-old, rugged and handsome and —

— wait wait wait. I know who that is. That’s Aaron Rodgers. DID YOU TIME TRAVEL INTO THE PAST, ARÓN? WHAT WERE YOU PROTECTING US FROM? DID YOUR MISSION INTO THE PAST WORK? I MUST KNOW THE ANSWERS. SOMEONE PLEASE INVESTIGATE FURTHER, FOR THIS IS NOW BEYOND MY PAY GRADE.

Anyway. Quadra-Salcedo, if that was his real name, didn’t just break records, he absolutely annihilated them. According to the Shreeveport Times — and you can believe as much of this as you want — he once managed a throw of 124m, crushing Danielsen’s mark by more than 44 percent. Since he was using an illegal delivery, of course, the IAAF invalidated the throw. But Quadra-Salcedo wasn’t done.

Working with Nolan R. Comas, a track coach at the University of Puerto Rico, Quadra-Salcedo modified his delivery, dropping the initial spin but still throwing sidearm. Comas was awed by his larger-than-life charge, whom he claimed at two or three chickens per meal and up to 16 lbs of meat a day. Quadra-Salcedo, meanwhile, had perfected his non-spin form, and started to hit — and surpass — the magic 85.7m mark. His best throw in Puerto Rico was a little over 89m.

The IAAF ignored that one too. Their rationale isn’t entirely clear, but Comas hints that the soapy water Quadra-Salcedo was using to reduce friction may have constituted another rules violation. Hopes that he could reach those distances without the soap, however, failed to materialize. Quadra-Salcedo settled down as a mere national champion in discus and hammer toss, never to find his way into the javelin record books.

At least he had his Super Bowl ring to console him.