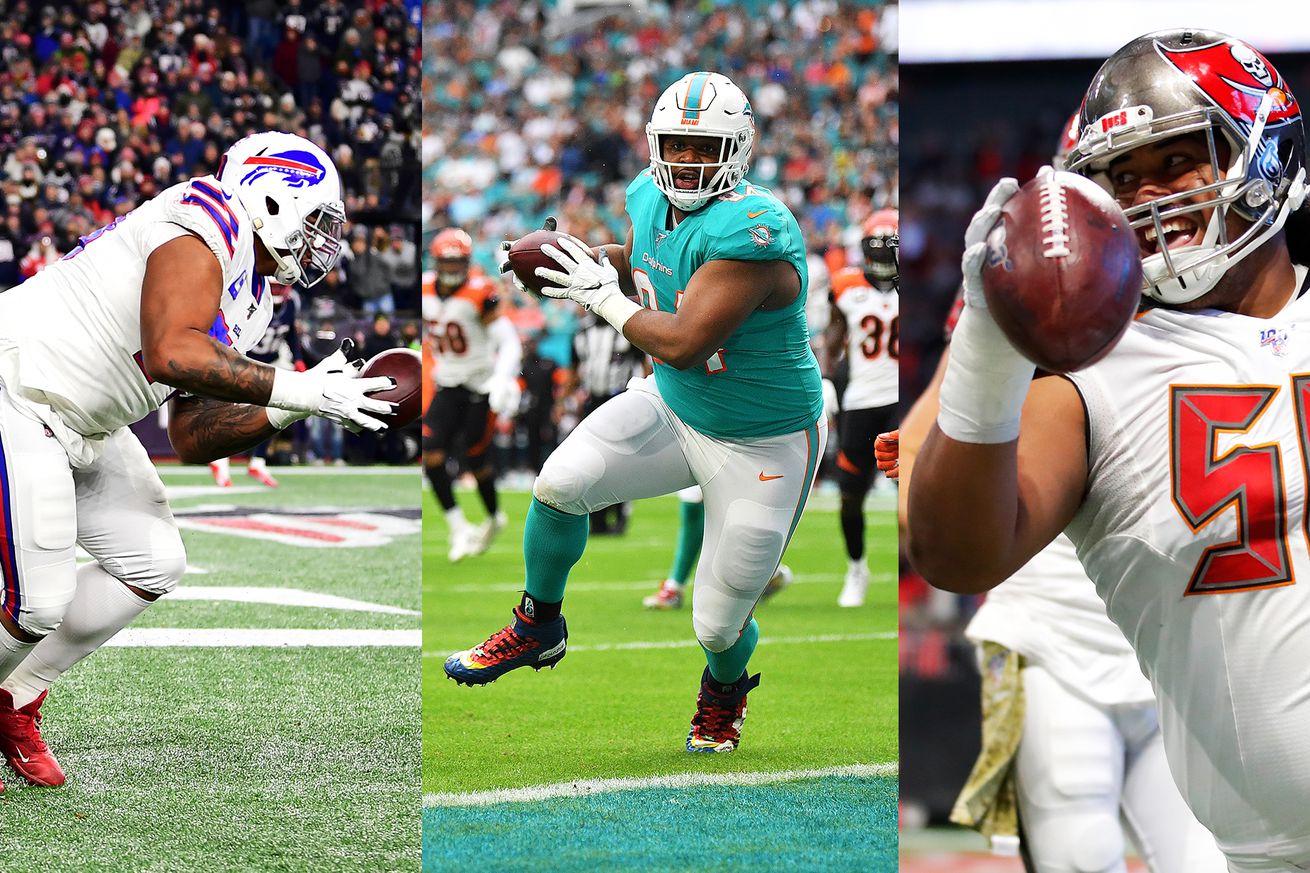 A record-breaking amount of players over 300 pounds have caught a touchdown pass so far in 2019.

Who doesn’t love to see the NFL’s largest players score touchdowns? Linemen battle all game in the trenches in relative anonymity. It’s heartwarming to see them get a chance to step into the spotlight.

But in most years, those rare opportunities come with a random stroke of luck. A tipped pass that lands in the arms of a defensive tackle, or a fumble that’s recovered by an offensive lineman in the end zone. That’s not what’s happening in 2019.

Teams are scheming up ways to throw touchdown passes to some of the biggest players in the NFL.

When Buffalo Bills offensive tackle Dion Dawkins caught a touchdown pass in Week 16, he became the fifth player over 300 pounds to record a receiving touchdown in 2019. That’s the most in an NFL season in at least two decades.

That is the most in a single-season since at least 1995.#BUFvsNE

Then it happened again the very next day. Miami Dolphins defensive tackle Christian Wilkins hauled in a 1-yard touchdown pass that made it six on the year for 300-pounders. It’s a big man touchdown revolution, so buckle up and enjoy the ride.

Here are all the 300-pound touchdown receptions of 2019, ranked by the weight of the receiver.

It’s hard to imagine how the Colts could lose a 6’5, 310-pound offensive tackle in the middle of the end zone … until you see it. Some pre-snap motion and a play-action fake made it easy for Quessenberry to sneak through and run straight toward the goal post. All Marcus Mariota had to do was hit him with a quick dart.

Draw it up, Arthur Smith!

This particular touchdown was cool for more reasons than Quessenberry’s size. He spent years fighting non-Hodgkin’s lymphoma and didn’t make his NFL debut until 2017, the end of what should’ve been his fifth NFL season. He’s spent most of 2019 on the Titans’ practice squad, but for a brief moment in September he got a bit of NFL glory.

A touchdown in the opener for Ricard wasn’t that surprising. Unlike the rest of the players on this list, Ricard actually plays an offensive position that touches the ball from time to time.

He was a defensive tackle in college, but moved to fullback when he joined the Ravens in 2017. He also caught two touchdown passes as a rookie. His touchdown in Baltimore’s season opener was the third of his career.

ANOTHER ONE. @LJ_era8 throws his 5TH touchdown of the day. @Pric508 gets in on the action this time. pic.twitter.com/HBTSyp2K8V

Ricard was named to his first career Pro Bowl earlier this month.

Wilkins’ 1-yard touchdown against the Bengals wasn’t the cleanest play you’ll ever see. He fumbled at the goal line and had to pick up in the end zone. Still, he got the job done,

Miami’s first-round pick in the 2019 NFL Draft and it’s not too shocking that he’s someone they’d think to use on offense. After all, he showed the world his remarkable flexibility by doing the splits to celebrate a national championship victory for Clemson.

Larger men caught touchdown passes in 2019, but Dawkins’ grab may be the best because it came with a five-star celebration. The whole Bills offensive line was ecstatic to see one of their own score a touchdown, and then Dawkins hit us with a dance.

Dion Dawkins hauls in the @BuffaloBills touchdown to tie it up. #GoBills @DDawkins66

Dawkins actually caught a touchdown in 2018 too. That one also came with jubilation from his teammates; however, there was no dance. He was more prepared the second time around.

Much like Quessenberry’s touchdown earlier in the year, the Titans snuck another offensive lineman into the end zone off of play action. The second time it was 6’8 offensive tackle Dennis Kelly.

Another excellent celebration ensued with Kelly passing out imaginary beers to his teammates for shotgunning. If big-man touchdown receptions wasn’t the NFL trend of 2019, beer-themed celebrations for offensive linemen may be the top trend instead.

Vea isn’t just the largest man on this list. At just under 350 pounds, he’s one of the heaviest in the entire league. The Lions’ 350-pound defensive tackle Damon “Snacks” Harrison is the only defensive player heavier than Vea.

So naturally, the Buccaneers had to find a way to throw Vea a touchdown pass.

THIS IS NOT A DRILL

VITA VEA HAS HAULED IN HIS FIRST CAREER TOUCHDOWN pic.twitter.com/UXlButlO9H

Vea has taken a few offensive snaps in 2019, mostly as a lead blocker. But on one glorious play, Vea gave us the biggest big-man touchdown in NFL history.