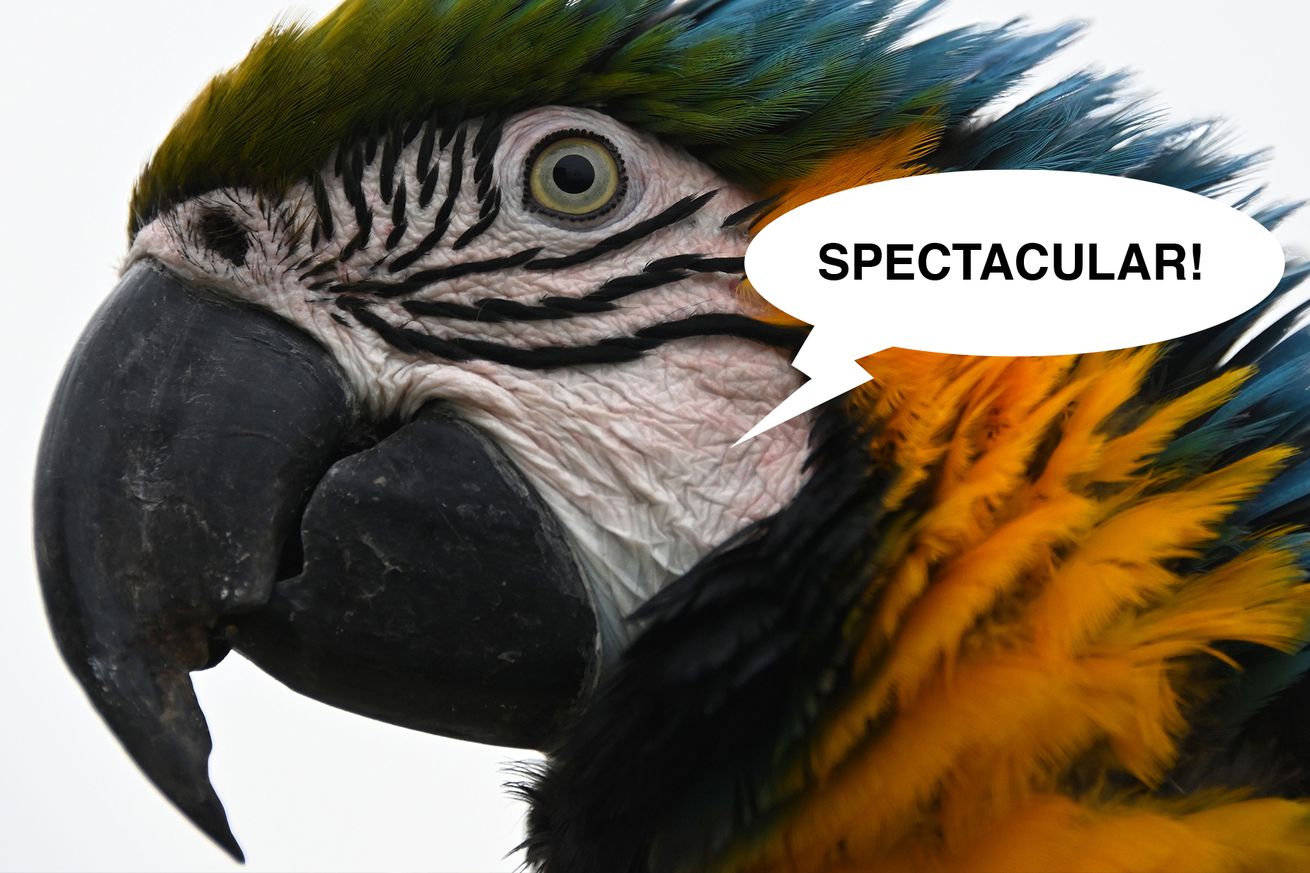 As my friend James Dator points out, it’s rather charming that the bird-removal operation involved briefly coaxing the macaw onto a faux-head. I’m a little sad they didn’t have to put much effort into disguising a soccer ball as a head, but hey, Brazilian Head-Parrots are apparently not very picky, and that’s OK.

Anyway, the Head-Parrot gives us a chance to discuss and rank Sports Birds, which are one of the most important subsets of the Sports Animal pantheon. Let’s first set some ground rules:

This pigeon invaded the 2010 World Cup match between England and Algeria, and was, as far as I remember, the only interesting thing that happened. As a vest improvement on the actual game, I am deeming World Cup Pigeon a Good Bird, even though it should have had enough sense to be doing literally anything else.

A whole family of lapwings once invaded a São Paolo under-20s game. These make our Good Bird list because southern lapwings look like badasses and they’re so aggressive in defense of their eggs and chicks that I’m scared not to put them on here.

Had a decent career, mostly with Burnley and Bolton Wanderers. Don’t knock anyone who stuck around for that long, even if their time in the top flight was minimal. A Good Bird.

One of these pigeons takes some effort to chase away. But what makes them Good Birds is the effort they went through to get to Court No. 3 at all. The skies of Wimbledon are proudly patrolled by Rufus the Hawk, the tennis club’s official Bird Scarer. Any pigeon who wants in has to brave the beak and talons of a Harris’s Hawk, which …

Sammy Seagull was minding his own business at the Melbourne Cricket Ground when he was caught by a pull shot from Perth’s Adam Voges and bit it pretty hard. Rob Quiney, the closest fielder, helpfully offered to put the stricken bird out of its misery, opting instead to carry it past the boundary to let nature take its course.

But seagulls are one of nature’s most spiteful creations, so Sammy wasn’t going to let a cricket ball knock it out for good. A few minutes later it was back on its feet, delighting the crowd with its miraculous resurrection. Great bird.

On August 23rd, 1988, a chicken intervened between the Los Angeles Dodgers and the New York Mets. It was apparently tossed onto the field somewhere near the Mets dugout, and according to the Escondido Times-Advocate, “A Dodger ballboy and a Mets batboy attempted to corral the brown chicken, but it eluded them twice before flying to the top of the auxiliary scoreboard.”

You all know exactly what the King of Sports Birds is going to be. But, just in case: WARNING DO NOT PLAY THIS VIDEO UNLESS YOU WANT TO SEE A BIRD GET EXPLODED.

The story that most comes to mind when I think of the poor bird (a mourning dove, since you asked) killed by Randy Johnson is when Douglas Main of Newsweek decided to interview a bunch of ornithologists about it:

Do you feel bad for the bird?

Michael Wunder, associate professor at the University of Colorado, Denver: I didn’t feel bad for the bird. I’m an ornithologist who studies population demographics, which just means I am interested to know when where and how birds die.

Michael Wunder will live forever in my memory as The Bird Death Appreciator.