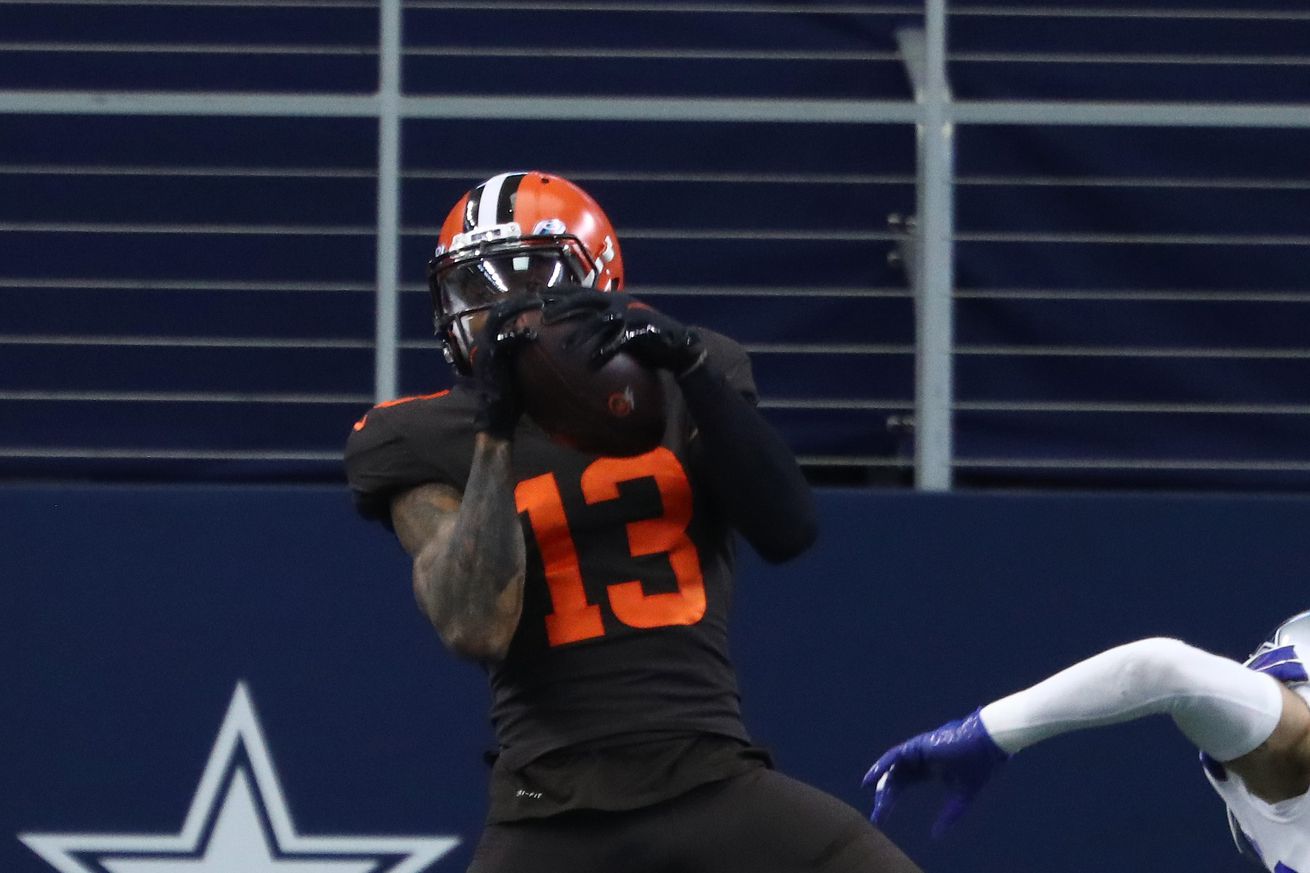 Cleveland put up 49 points on the Cowboys to win a super fun game in Week 4.

It was still hard to tell what to make of the Cleveland Browns and Dallas Cowboys as they met at AT&T Stadium in Week 4. The Browns were 2-1 for the first time in ages, but quarterback Baker Mayfield was struggling to make plays in the passing game. The Cowboys, meanwhile, were 1-2, but Dak Prescott was putting up league-leading numbers. A head-to-head matchup was supposed to tell us what was real with these teams, and what was mostly due to small sample size.

The Browns outlasted a valiant comeback attempt from the Cowboys to walk away with a 49-38 victory over Dallas. The win moves the Browns to 3-1 on the season for the first time since 2001. The Cowboys are now 1-3.

The Browns entered the fourth quarter with a 41-14 lead after Cody Parkey hit his second field goal of the game. The Cowboys responded with three quick touchdown drives all capped with two-point conversions. Just when it looked like the Browns were on the brink of a historic collapse, Odell Beckham Jr. took a reverse 50 yards for his third touchdown of the day.

This is what we learned from Browns-Cowboys in Week 4.

It’s been a long, long time since the Browns have been this good

The Browns stats floating around right now are hilarious. Cleveland entered this game with a winning record for the first time since Week 15 of the 2014 season. This is their best start in 19 years, and the best their offense has looked early in the season in more than 50 years.

The Browns just dropped 31 points in the first half.

This is the first time in over 50 years they’ve scored 30+ points in three games straight. pic.twitter.com/uRhnX9xqDw

The Browns can hang their hat on their running game. Even as starting tail back Nick Chubb was taken out early in the game with an injury, the Browns still finished this game with 307 yards rushing. Four different Cleveland players finished with over 40 yards on the ground, and no one finished with 100 yards.

Mayfield is still struggling, so it’s not all good for the Browns. The former No. 1 overall draft pick finished with just 165 yards passing on 30 attempts, but did throw two touchdowns and zero interceptions. Mayfield has some great weapons with Odell Beckham Jr., Jarvis Landry, and Austin Hooper, but so far it’s been the running game that has carried Cleveland.

This game felt like a good recipe for how the Browns’ offense can find success this season: find ways to get Beckham the ball, establish the run, and hope Myles Garrett and the defense can provide a consistent pass rush.

No, the Browns aren’t perfect, but hey: they’re better than they have been a long time. Enjoy it, Cleveland.

The Cowboys passing attack is great. Their defense is not

Dak Prescott finished the game with an immaculate line: 502 yards passing, four touchdowns, and one interception. That’s the type of performance we’ve come to expect this season from the 27-year-old quarterback, who entered this game leading the NFL in passing yards.

Unfortunately, a prolific passing game isn’t translating to wins for the Cowboys.

Dallas needs to fix the defense. The Browns ran all over them for an average of 7.7 yards per rushing attempt. The Cowboys looked straight up demoralized by being unable to get off the field throughout the first three quarters as Cleveland ran the ball right down the their throats.

Most points ever given up by a Cowboys defense is 436.

Dallas is currently on pace to give up 584 points.

The only other time the Cowboys allowed 38 or more points per game in a three-game span was in the 1960 season.

Dallas has a lot of money committed to its defense. They have to be better.

The Browns really know how to execute a trick play

The Browns won this game because of two trick plays.

The first one came early in the first quarter, when wide receiver Jarvis Landry took a reverse and threw it down the field for a touchdown pass to Beckham. This is one of the better touchdown throws by a non-QB you will see:

Just when it looked like the Browns were going to blow the game, Beckham took a reverse for a 50-yard touchdown run in the fourth quarter. Both trick plays were beautifully executed.

The Browns have some serious weapons, they just haven’t always been able to shine as Mayfield continues looking to hit his stride. For a week against Dallas, everything was working the way Cleveland always envisioned it.