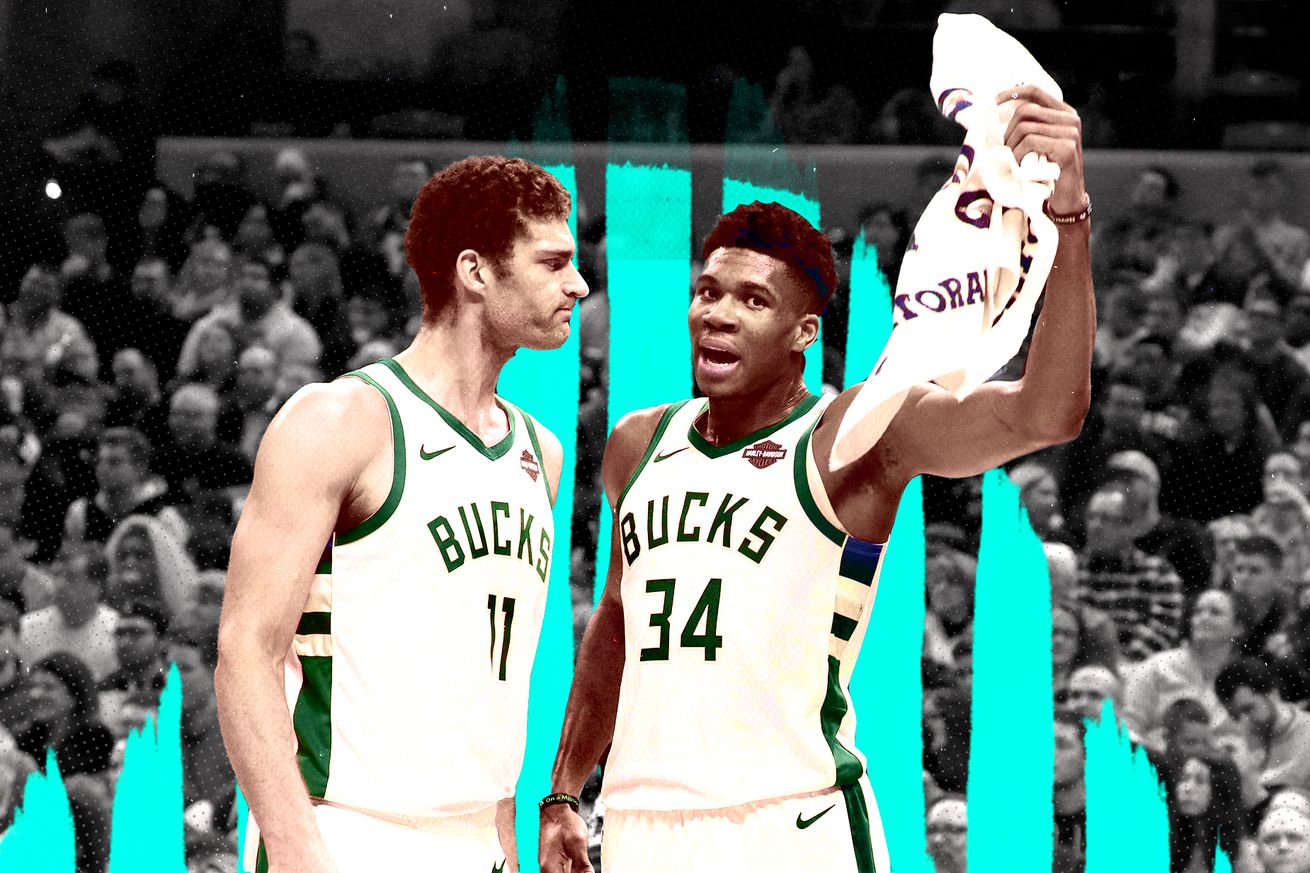 Will they be Spurs 2.0 or a one-year wonder? Five key players are free agents, and the Bucks can’t keep them all.

The Milwaukee Bucks spent 2019 defying expectations as thoroughly as any team in recent NBA history. Before the season, 538 gave the Washington Wizards and Utah Jazz better odds to reach the Finals. Since then, Milwaukee won 60 regular-season games, humiliated the Detroit Pistons, overwhelmed the Boston Celtics, and are now six wins away from an NBA championship.

At the very least, these Bucks have already established themselves as a terrifying contender. But win or lose their final game, they face a perilous summer, one that may alter their identity and deplete the depth that’s made them appear unbeatable.

Two fundamental futures exist. In the first, Milwaukee sustains its success in a way that reminds NBA enthusiasts of the San Antonio Spurs. In the second, this 2018-19 season is remembered as lightning in a bottle—a group expertly built with short, team-friendly contracts that complement Giannis Antetokounmpo.

With Antetokounmpo in Tim Duncan’s role as the transcendently selfless 24-year-old cultural bedrock, and Mike Budenholzer currently the same age Gregg Popovich was for San Antonio’s first title, Spurs 2.0 is in play.

But this specific roster’s success is thanks to several other players. As is increasingly the case in a league dominated by short-term contracts designed to generate parity, some may be too expensive to keep.

This summer, Brook Lopez, Malcolm Brogdon, Khris Middleton, and Nikola Mirotic are all eligible for free agency, while George Hill’s non-guaranteed contract is unlikely to be paid in full. (Starting point guard Eric Bledsoe was slated to be a free agent before signing a four-year, $70 million extension in January. The contract simplified their summer plans, but may not have been the right allocation of resources given Bledsoe’s shaky postseason play.)

Each has been valuable and some have been indispensable during Milwaukee’s run, and their importance will only amplify in the Finals, should the Bucks qualify. Here’s a quick breakdown of each situation.

Let’s begin by saying it’ll be a total shock if Middleton wears a different jersey next season. He’s Antetokounmpo’s only All-Star teammate, and Milwaukee doesn’t have enough cap space to replace his talent. At 28, staring at the last giant payday of his career, it’s only right for Middleton’s representatives to want a five-year max contract, worth about $190 million. The largest deal any other team can offer is one guaranteed season and almost $50 million less, so the Bucks can hunt for a happy medium that satisfies all parties. But when push comes to shove, Middleton is worth whatever he wants to be paid.

His offensive game is potent and self-supporting. He can create his own shot in just about any situation (post-ups, off the catch, in transition), is an underrated defender both on and off the ball, and allows Budenholzer to preserve Antetokounmpo by not overextending his minutes. (The Bucks actually had a higher point differential this season when Middleton was by himself than when he played alongside the likely MVP, a trend that’s continued in the playoffs.) Middleton is integral in the short term, and since Antetokounmpo’s own free agency looms over every short-term decision, disappointing the franchise player isn’t an option. Middleton stays, regardless of cost.

Milwaukee’s sharp-shooting off guard doesn’t need the ball to positively impact his team’s offense, and he knows how to make the type of quick decision that severely damages the other team whenever it pings into his hands. On a Bucks team that needs floor spacers who can also put the ball on the floor and make a play, Brogdon is critical. He finished the regular season shooting over 50 percent from the field, 40 percent from three-point range, and 90 percent from the line, plus his ability to funnel ball-handlers into the paint is perfect for Milwaukee’s defensive scheme. He’s sturdy.

The 2017 Rookie of the Year is also a restricted free agent. At 26, he has room to improve and his new contract should cover most of his prime. The Bucks can match any contract offer from another team, but if a rival goes bananas on a long-term deal, all bets are off. Knowing Milwaukee just payed Bledsoe, has to pay Middleton, and wants to avoid the luxury tax as long as it can before Antetokounmpo’s supermax contract kicks in, the threat of a punitive offer sheet from another team is a real possibility.

Milwaukee may just match whatever sheet Brogdon signs, or be able to find some common ground on a deal that makes everyone happy before another team gets to set the terms. Hometown discounts are the lifeblood of any dynastic run.

But Brogdon is the type of plug-and-play professional who functions just about anywhere, be it on a growing team in search of stability or an established group that wants to reach the next level by finding complementary role players for their star(s). The Dallas Mavericks, Phoenix Suns, Utah Jazz, Chicago Bulls, Indiana Pacers, and Los Angeles Lakers should be interested.

Pat Connaughton, Sterling Brown, and Hill filling in. But none of those guys can make Kawhi Leonard battle for his own personal space, like Brogdon has against Toronto, in addition to his other skills.

As the competition stiffens, players like Brogdon are exactly what the Bucks need. Losing him would be a blow.

Lopez is a uniquely critical piece in Milwaukee’s puzzle. He’s also the free agent who’s most likely to flee, due to the nature of his current contract.

Lopez finished the regular season as one of 17 players to launch at least 500 threes, and made 37 percent of them when wide open. He spaces opposing centers out to give Antetokounmpo necessary driving lanes while simultaneously functioning as the backline anchor of a defense that owned the paint.

Lopez’s Bird Rights, on account of the bargain one-year, $3.3 million contract he signed last summer. That means that if they want to pay him more than $4 million, they need cap space to do it. The Bucks would have to renounce all their free agents (not including Middleton) and waive Hill to make re-signing Lopez a conversation, but even that probably doesn’t clear enough space to compete with other teams’ check books.

That bad news gets a little worse when scanning this free-agent class for a replacement. There are zero affordable centers who can fill Lopez role and be signed with the mid-level exception. (DeMarcus Cousins is a pipe dream, but as close as Milwaukee could get to replicating Lopez’s two-way impact.) A few bigs, such as DeAndre Jordan, JaVale McGee, Anthony Tolliver, Mike Muscala, and Mike Scott, can alleviate one side of the ball, but not the other. Internally, the DJ Wilson/Ersan Ilyasova tandem may be able to fill the void, but neither can snuff out layups and drain five 30 footers in the same game.

Losing Lopez will be hard, but it also may force Budenholzer to change his scheme in ways that could benefit Milwaukee in the long run, particularly if it unleashes Giannis as a part-time center (something he hasn’t done much of throughout his career). Great coaches make their style fit personnel, not the other way around.

How the Bucks response to Lopez’s possible departure will be fascinating. It’ll tell us a lot about Giannis’s greatness and how dramatically this team will be able to evolve around him over the next few years.

The Bucks might’ve been in legitimate trouble in the second round if Hill didn’t average 14 points on 60 percent shooting. But unless they’re willing to pay him $18 million next year (about $2.5 million more than Bledsoe is set to earn), he probably won’t be around.

Mirotic’s shooting tacks onto what the Bucks already have in their frontcourt, but no team will ever say “No thanks, I think we already have enough shooters.” The relevant question then becomes if Milwaukee can find shooting at a cheaper cost. It’ll be very hard for them to stay under the luxury tax if they keep Mirotic, in addition to re-signing Middleton and Brogdon (at a deal that hypothetically starts around $15 million). But if Lopez leaves, keeping Mirotic may be a priority.

Donte DiVincenzo, Brown, and Connaughton — along with a first-round pick. Bledsoe is locked up through 2022 on a sneaky tradable contract, thanks to the non-guaranteed year in 2022-23. Ilyasova is around for at least one more go around, as his contract is non-guaranteed after next season. Tony Snell is alive!

But the only thing harder than going from good to great is staying great for a long time. Even when you have a player that evokes the supernatural, trips to the Finals are not guaranteed. Antetokounmpo will singlehandedly prevent the Bucks’ floor from dropping below a certain threshold, but when the championship is a goal worth embracing, routine playoff appearances won’t cut it. (Keeping this train on track will be even trickier thanks to previous trades that shipped out their first-round picks in 2020 and 2022.)

The Bucks look like a juggernaut now, but this summer will ultimately determine how long they stay that way. Going forward, their culture, player development, and system that maximizes everyone’s skill will be tested against teams that now have a season’s worth of film to combat it. They’ll go from hunter to hunted, possibly without two or three integral pieces that helped them get where they are.

However arduous their future is, Antetokounmpo and Budenholzer are nothing if not confident in each other. Both will get better as they age, and are positioned to reach a level of excellence that can make everything around them feel interchangeable.

The Bucks have arrived. Let’s see how long they can stay here.