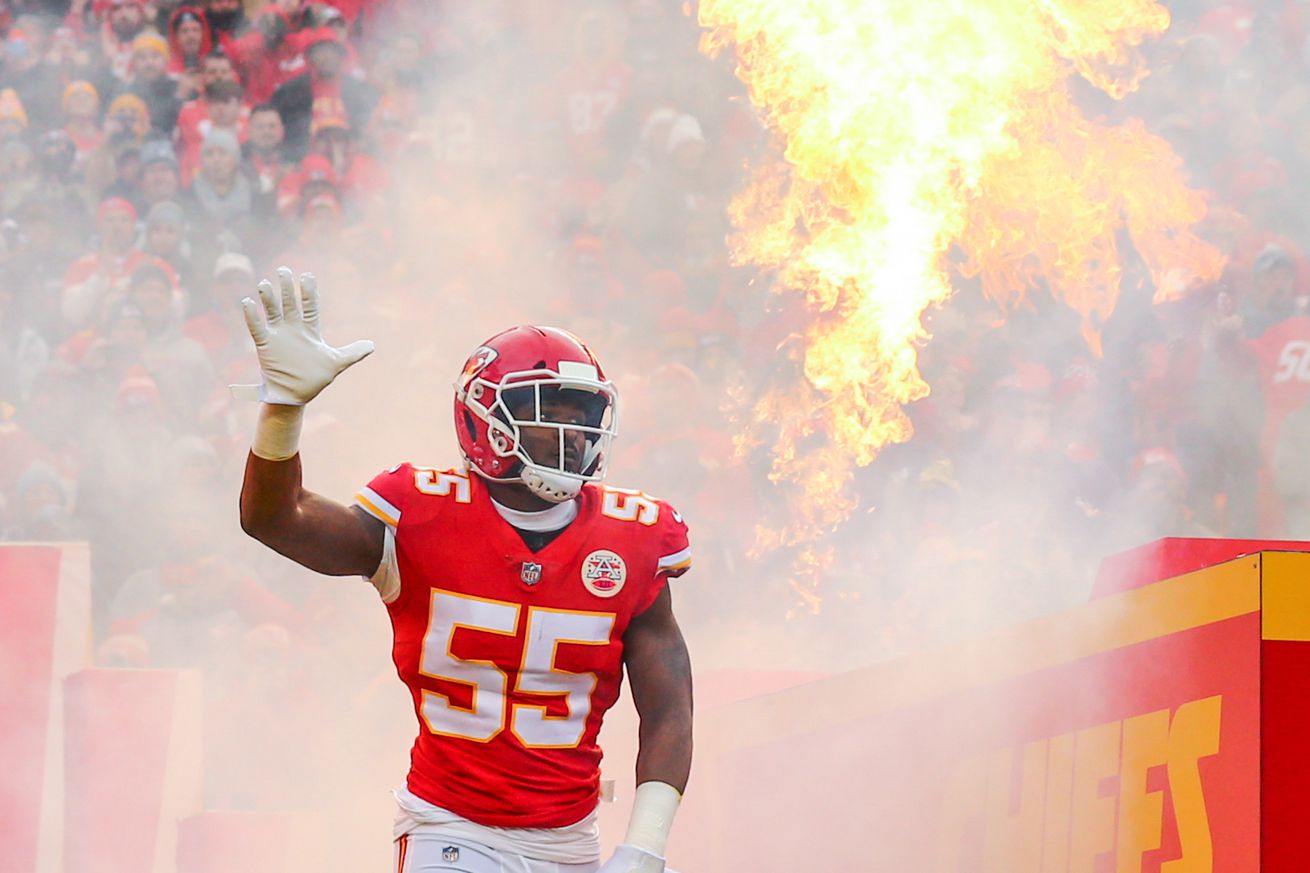 Retired NFL defensive end Stephen White breaks down how instrumental Dee Ford was in getting the Chiefs to the AFC Championship Game. He might not be done, either.

I’ll be honest with you. Having seen all the playoff games live last weekend, I was initially pretty sure that I was going to pick Chiefs outside linebacker Justin Houston as my Hoss this week. But then when I turned on the film, it was his teammate and fellow outside linebacker, Dee Ford, who actually kept catching my eye. Houston did have a pretty good game in his own right, but by the time I was finished breaking the film down it was clear to me that Ford was actually the more impactful of the two.

Ford, who was selected 23rd overall in the 2014 draft, has had an up-and-down career thus far. However, with free agency on the horizon this offseason, he had the best season of his career this year with 13 sacks and a ton of pressures. His get-off and speed rush are weapons that opposing offenses have to account for every week. He will no doubt get paid an exorbitant amount of money from either the Chiefs or another team to rush the passer this spring, and that price tag will surely continue to go up if he keeps playing out of his mind like he did on Saturday.

I like Ford a lot as a pass rusher, but he usually leaves something to be desired for me when it comes to finishing off plays. On Saturday, however, he was hustling his ass off and making plays all over the damn field. He literally started the game off with a big play, a tackle for a 3-yard loss on Indianapolis running back Marlon Mack. He didn’t take his foot off the gas until the Chiefs pulled him off the field right at the end of the end of regulation when the game was already decided in Kansas City’s favor.

His performance was a huge part of why the Chiefs were able to bottle up a pretty high powered Colts offense for much of the game.

Let’s take a look at some of those impact plays he made this past weekend, shall we?

With just under five minutes left in the first quarter, the Colts found themselves already down 14-0 and facing a third-and-2 from their own 31-yard line. After going three-and-out on their first two drives, they desperately needed to get something, anything, going on offense to keep the game from getting out of hand.

Ford was lined up in his usual spot as the left edge rusher, and he had a really nice get-off on the snap, as usual. As I mentioned before, everybody who watches film knows how fast Ford can get around the edge, so naturally Colts right tackle Braden Smith set a little soft so he could try to keep up with Ford’s speed rush.

Only this time Ford eschewed his normal dip and rip around the edge for a bull rush right down the middle of Smith. To say that Smith was caught off guard by Ford’s power rush would be the epitome of understatement. To his credit, Smith did a decent job of recovering after Ford had momentarily lifted him up off the ground and pushed him back about six yards into Luck’s lap.

Smith was at least able to stay in front of and engaged with Ford, but the problem was he lost so much ground initially, that his body precluded Luck from being able to step up in the pocket. With his path forward blocked, Ford was then in position to come off Smith’s block and take him down, along with Houston coming around the edge against the left tackle. Luck quickly realized he would have to try to escape outside of the pocket to have any chance of salvaging the play.

Ford did end up coming off of Smith’s block when he saw Luck scrambling, but he wasn’t quite able to take down Luck. What Ford did do, however, was give a great effort by diving at Luck’s legs to force him even deeper into the backfield.

The result was that although Luck did technically break containment around Ford, he was so far behind the line of scrimmage at that point that Houston was still able to come away with a sack on him after he ran him down all the way to the far sideline and knocked him out of bounds.

Houston gets credit for the sack there, but Ford’s big-time bull rush and hustle were obviously a huge factor on that play. The end result was the Colts three-and-out once again, and the Chiefs offense went down the field on the ensuing drive and kicked a field goal to bury them even further.

Oh, but Ford was just warming up!

Late in the third quarter, Indianapolis showed some signs of life. Down 24-7, the Colts defense forced a Sammy Watkins fumble on a fly sweep on the very first play of a Kansas City drive. They recovered it at the Chiefs’ 20-yard line. If the Colts offense could have just punched it in there, the deficit would have been cut to 10 points and things could’ve gotten mighty interesting in the fourth quarter.

Alas, Ford was having none of that on Saturday.

After an incompletion on the first play of the drive, Indianapolis tried to throw it again on the next play. It did not go so well.

Ford was again the left edge rusher, and this time he did indeed utilize his patented speed rush. Smith was not ready. The Colts were in empty set, so Smith didn’t have the benefit of a potential chip block to slow Ford down. With the Chiefs sending five rushers, he also couldn’t count on any help from the right guard if Ford made an inside move. It appeared to me that Smith initially tried to set a little firmer in case Ford went with a power rush again, but the problem is that Ford is so fast when he commits to a speed rush, if you don’t set for it, he can literally run right past you.

To make matters worse, because Smith hadn’t set for speed initially, he ended up having to turn his body perpendicular to the line of scrimmage to try to catch up to Ford around the corner. Turning his body that way did allow Smith to intercept Ford just as Ford was turning the corner, but it also gave Ford a softer, shorter corner to get around. Smith didn’t stand a chance at that point.

And Luck was barbecued chicken.

Ford didn’t really even have to do any kind of hand move. He chopped with his inside hand as if he was going to try to dent Smith’s punch attempt, but Smith couldn’t even get his hands close enough to him for Ford to chop them. Ford ended up just sinking in a nice dip and rip move on Smith’s outside shoulder and continuing on his merry way.

Luck had just taken a crow hop forward and was about to begin his throwing motion when Ford reached with his outside hand and basically snatched the ball right out of Luck’s grasp. Smith pulled Ford away after he caused that fumble, so that Ford couldn’t recover the fumble. But there wasn’t anybody to keep Houston from jumping on it, and he recovered the football at the Chiefs’ 32-yard line.

Just like that, one of the Colts’ best scoring opportunities of the day was squandered thanks to Ford. The Chiefs got decent starting field position out of it to boot. Without that turnover, who knows how the rest of the game might have played out?

OK, let’s talk about one more of Ford’s impressive plays.

A little later in the game, in the fourth quarter, Ford almost got himself another sack and caused fumble. Smith was once again his victim.

This time it was the first play of another Colts drive where they were backed up at their own 13-yard line and still down 24-7 with only 8:35 left in the game. Indy did have a running back offset to Ford’s side in shotgun and in position to chip this time, but the running back didn’t even to help out on him, leaving Smith all alone on an island again. That continued to be the opposite of a winning strategy for Indianapolis.

After burning Smith with that speed rush earlier, Ford decided to go back with another bull rush this time around. After getting beat with both speed and power all game, I guess Smith thought he would try to split the difference and instead of setting for one or the other, he just kept backpedaling to try to stay in front of Ford and hoped for the best.

When he saw Smith drifting backwards, Ford put his helmet right under Smith’s chin and got so much push that Smith’s foot ended up being in the Luck’s way. Luck tried to step into a throw and Smith’s inside foot tripped him at the same time Ford was reaching inside with his inside hand to try to force another fumble.

Luck ended up falling forward from Smith tripping him, and Ford was able to hit Luck’s arm right above the elbow just as Luck’s hand came forward. The ball did slip out of Luck’s hand, but his arm was already into his throwing motion and it was correctly ruled an incompletion on the field. Had Ford hit his arm just a half a second sooner, he would have had another sack and caused fumble on the day.

Dee Ford played as complete a game as I have ever seen him play as a pro on Saturday, and he had the Chiefs defense looking pretty damn dominant against the Colts. Of all the plays he made, though, I think, hands down, the sack and caused fumble right after the Chiefs had turned over the ball deep in their own territory, really helped to seal the victory for the home team. That play in and of itself might have earned Ford Hoss honors this week, but the fact that he added two other pressures, a tackle for a loss, a hit on the quarterback, and three other tackles, made his selection somewhat of a no-brainer.

For his efforts against the Colts to get the Chiefs to the AFC Championship, Ford is my Hoss Of The Week for the Divisional Round of the playoffs.

If he can play at that level or close this weekend, Tom Brady is going to have a long day.