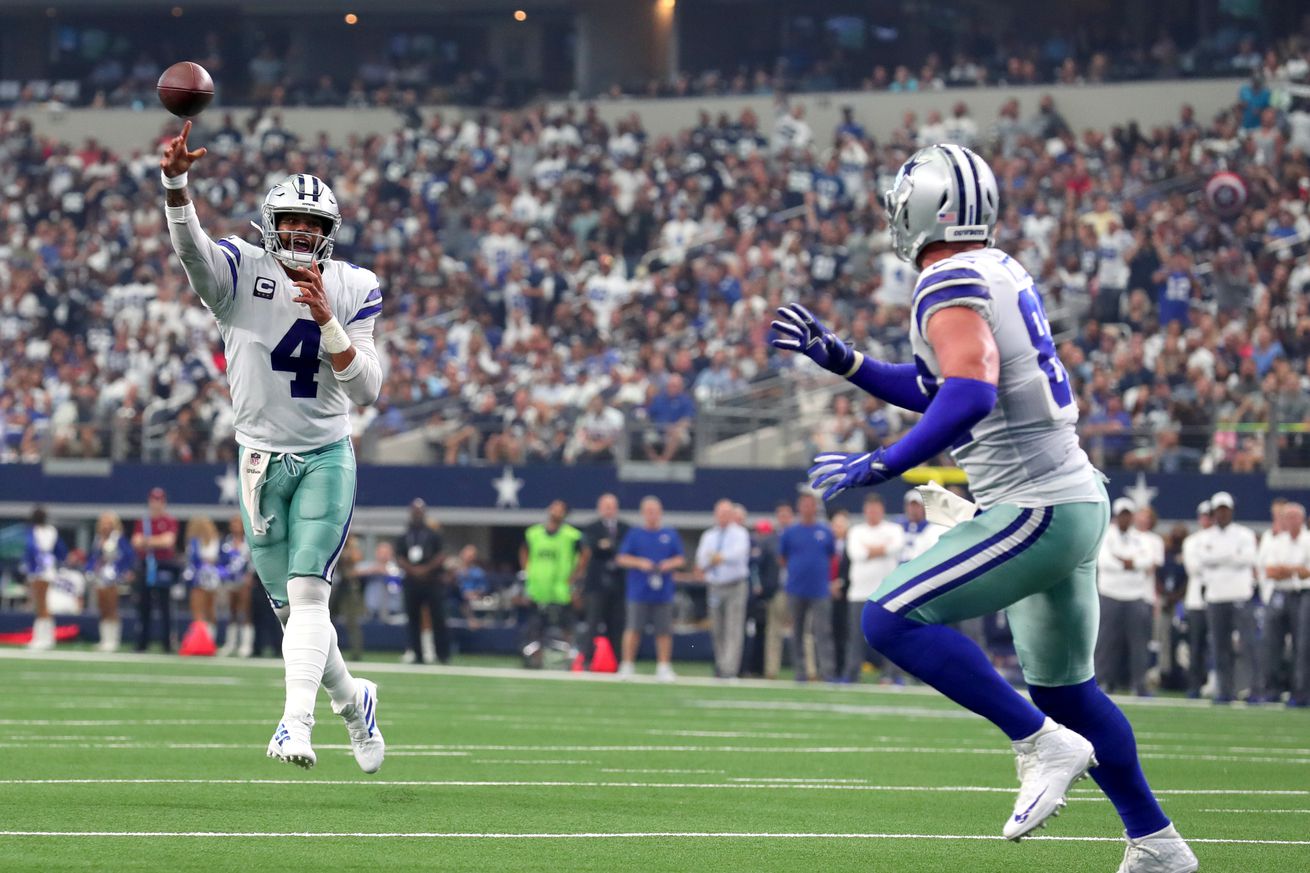 Retired NFL lineman Geoff Schwartz takes a look at what excites him so far about Kellen Moore’s offense, and how it’s helping Dak Prescott succeed.

I know, I know, there are always overreactions after the first week in a new NFL season. We finally get football back in our lives and we are so emotional over it that we make wild proclamations, even though every team has only played one game. I would never do such a thing.

So when I say I’m in LOVE with the Dallas Cowboys’ new offense, that isn’t an overreaction. They looked fabulous in their season opener, a 35-17 win over the Giants.

Heading into the 2019 season, Dak Prescott’s final on his rookie contract, there wasn’t much speculation about how he would play in a new offense. Most of us could agree the first three seasons of his career had gone well, but that Prescott hadn’t quite reached that elite level yet. The question has always been whether he is a limited quarterback because of his skillset or because of the conservative nature of his offense. This offseason, Dallas hired Kellen Moore — a former Boise State quarterback and Cowboys backup — to run this offense, which might finally give us a real answer.

Under old offensive coordinator Scott Linehan, the offense was run-heavy and boring in the pass game. My hope when Moore took over was that we’d see a more aggressive offense, one that uses Prescott’s skillset, including his legs, in the scheme. And boy was I pumped to see this offense against the Giants’ defense. Not only did Prescott play well, but almost as important, Moore called a game in rhythm.

Now, before we take a look at what the offense did in Week 1, let me bring up an annoyance I mentioned earlier this week: when people dismiss a good game because it came against a bad team. Yes, of course the opponent should factor into the evaluations, but the best teams and players should dominate those who are lesser than them. That’s what they do. They don’t play down to weaker opponents.

With that being said, let’s get into what was so exciting to see from the new offense in Dallas.

What immediately caught my eye during the game was the Cowboys’ variety on offense, as highlighted here:

First, there’s heavy play-action, which we’ll go over in a minute. Then added motion, which gives Prescott a good idea of man or zone coverage. It can also give defenders eye violations (looking at the motion and not their assignments) and allows for receivers to avoid press coverage. Finally, more personnel, which is great for the run game because you get fewer people around the line of scrimmage. For reference, the Cowboys were only 21st in the NFL last season in rush attempts out of 11 personnel.

I love play-action pass. It’s an opportunity for a big chunk play with minimal reads for the quarterback. As an offensive lineman, I was a fan of play-action pass because we could “run block” the defensive linemen, and they wouldn’t be pass rushing as hard.

As much as I love play-action pass, and think we all should love it, the rest of the NFL doesn’t always believe in it. (All the evidence for play-action pass success in the NFL can be found in this FiveThirtyEight article, if you want to dive in.)

Well, the Cowboys, and more likely Moore, did their research this offseason and decided to add more play-action pass into the mix. According to Sports Info Solutions, Prescott was 12 of 13 on play-action passing for 193 yards and two touchdowns. So many of these passes weren’t short with long runs, either: 124 of those 193 yards were in the air.

Let’s take a look at a couple of those passes.

This is as simple as it gets for Prescott. The Giants’ linebackers get sucked in and Blake Jarwin runs behind them for the Cowboys’ first touchdown. It might not get easier than this for Prescott all season:

It’s the same route concepts the Saints, Eagles, and Chiefs all run for big plays.

It ended up being the former, and Prescott hooked up with Cobb for a 25-yard throw:

Just a simple read for the quarterback.

Beyond just the stats, Prescott directed the offense with cool confidence

Besides doing well in the play-action pass game, I was impressed by Prescott’s control of the offense and how he showed no hesitation on third downs. He didn’t face that many third downs — he dropped back to pass only seven times on third down — but he completed five of those seven for 122 yards.

Here’s a clip from the third quarter where he showed excellent command of the offense. He’s changing the play at the line of scrimmage, gets the snap, and fires a rocket for a first down to Michael Gallup.

Here’s one earlier in the game as well. Prescott makes the calls at the line of scrimmage and then hits Gallup again with a laser throw:

I mentioned earlier that I’ve wanted to see the Cowboys use Prescott’s legs more often in high-leverage situations, such as third down. Well, such a situation happened on Sunday.

With the Cowboys up 14-7 with 2:20 left in the first half, they have a third-and-4 at the Giants’ 33-yard line. If they don’t convert, they must settle for a long field goal, plus the Giants get the ball back before the end of the half. So, they call a zone read, not a run-pass option, and Prescott pulls the ball for a first down.

The drive continues and the Cowboys score.

It’s little opportunities like that third-down play that have me excited for this Kellen Moore-called offense. This shows that he understands that Prescott’s legs are valuable — but only in the certain situations.

I hope games are always this easy for any offense, but after matchups against Washington and Miami, the Cowboys will finally meet some real competition. It’s expected the offense will slow down, but I’m still eager to see where it ends up. I’ve loved the variety, the play action pass, and the confidence from Prescott so far.