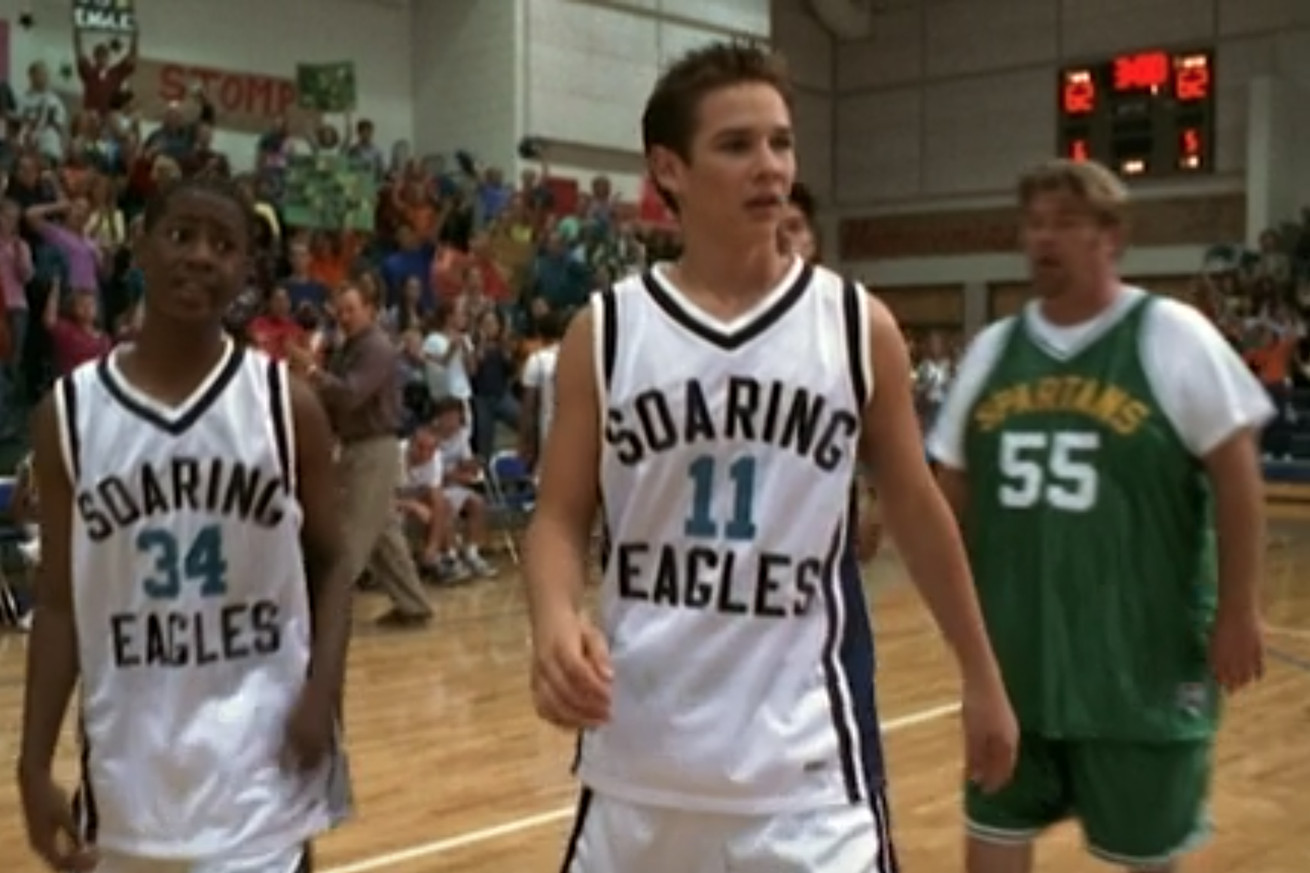 Folks, this movie perhaps wasn’t as good as we thought it was when we were kids.

Hello. I, Harry Lyles Jr., will review a different Disney Channel sports movie every Thursday on SB Nation. For the purpose of nostalgia and saving you time so you don’t have to watch these movies yourself (though I encourage you watch them anyway for your own entertainment), I’ll briefly run down my favorite moments.

The Luck of the Irish is about Kyle Johnson, a junior high aged kid who is the star of his school’s basketball team, and considered the luckiest kid in school. His school is holding a Heritage Day, which leads to Kyle taking an interest in where his family is from.

When he tries to ask his parents about it, they simply tell him that they moved to their current home from Cleveland, Ohio. Kyle and his best friend Russell Halloway end up going to an Irish festival after seeing the same symbol on an advertisement for the festival and noticing that it matches Kyle’s lucky coin, which he wears on a chain around his neck.

After attending, Kyle has the unluckiest day of his life, and realizes that the coin he’s wearing has been replaced by a fake. He learns that his family is Irish, and that the coin was the family’s luck. He then spends the rest of the movie trying to find and win that luck back from Seamus McTiernen, an evil leprechaun.

This scene, very early in the movie.

Yes, everybody get up and dance, because Kyle has arrived.

There’s a few things that Disney did in this movie to really make sure they were getting their point across. The way that his parents freaked out when Kyle would ever ask about their heritage is one.

This is the first one.

Kyle’s dad reacts like his way-too-young child just asked him a question that he shouldn’t be asking.

His mom did say here, “We’re Americans, Kyle, that’s all the heritage we need.”

This would definitely happen (it wouldn’t!)

Here’s another way that Disney went too hard in driving home a point. Kyle’s supposed to be lucky — that’s understood. But in the opening basketball scene, a ball is about to go out of bounds, and he wins the game by slapping the basketball through the hoop.

With all due respect to LeBron James, the best basketball player ever, he’s not even doing that. “Kyle Johnson” shouldn’t either. The amount of wrist strength that this would take is unfathomable: his hand should have fallen clean off his arm.

When Kyle eventually loses his luck and has an awfully unlucky day, everything goes bad. That includes his semifinal basketball game.

He did a lot of bad things in this game, but here’s the best highlight — again — with Disney putting a little too much mustard on it.

That’s some good and hilarious camera work, because you can tell neither Kyle or the opponent had a long way to go to the ground.

Kyle and his dad go to Emerald Isle, a potato chip company to try and get their luck back from Kyle’s grandfather. They end up getting kicked out after saying they aren’t leaving until they see him, and this old dude threw them across the lawn.

By this point, I’m noticing everything is horribly exaggerated, and the movie has gone from hilariously bad to just bad.

The most hilarious green screen work ever

I have really bad vision. It’s why at first, I thought I wasn’t seeing things right when I saw this particular scene, but whatever his grandfather has in his mouth here, it’s not a flute.

Perhaps a flute wasn’t in the budget, or Disney couldn’t find somebody with one for him to pretend to play. But… how? That’s absurd.

The Irishmen can’t really play basketball, and yet they were somehow waxing Kyle and his team for a minute there

This is the worst “dunk” in a movie that there has ever been.

If you can find something worse than that, please, send it my way.

Also, look at these handles. You can disregard the little step that Seamus McTiernen is doing here.

Kyle and his team had to win, because that’s how these movies go. But they aren’t losing to a team led by that guy.

People shit on Cleveland all the time, but for Disney to make it so that this leprechaun has to spend the rest of his days there is hilarious. That’s about all I need to say here.

Maybe the most impossible thing of all

At the end of the film, when the bad guys have been defeated and Kyle gets his luck back, Heritage Day is here. Kyle performs a dance, and then proceeds to sing “This Land is Your Land” and is joined by everyone else in the theater.

You know damn well nobody knows all the words to that song. Most people can’t even get the “Star Spangled Banner” right.

Russell is awful at basketball

There’s no way to sugarcoat this one: Russell is doo doo with a basketball in his hands. His dad’s reactions follow almost every single bad play, but they are also used to guide people on how they should be feeling about what’s going on in each basketball scene in the movie. His dad has no other role.

Here is a sample:

Aside from the occasional glance at the score, there’s not really any other metric to scale how good or bad the team is doing.

Russ is so bad, he can’t even buy a bucket in the driveway.

“He could build a house with all these bricks,” etc, etc.

Overall, this movie is a lot worse than I remember. But it’s not as bad as Russell is as basketball.