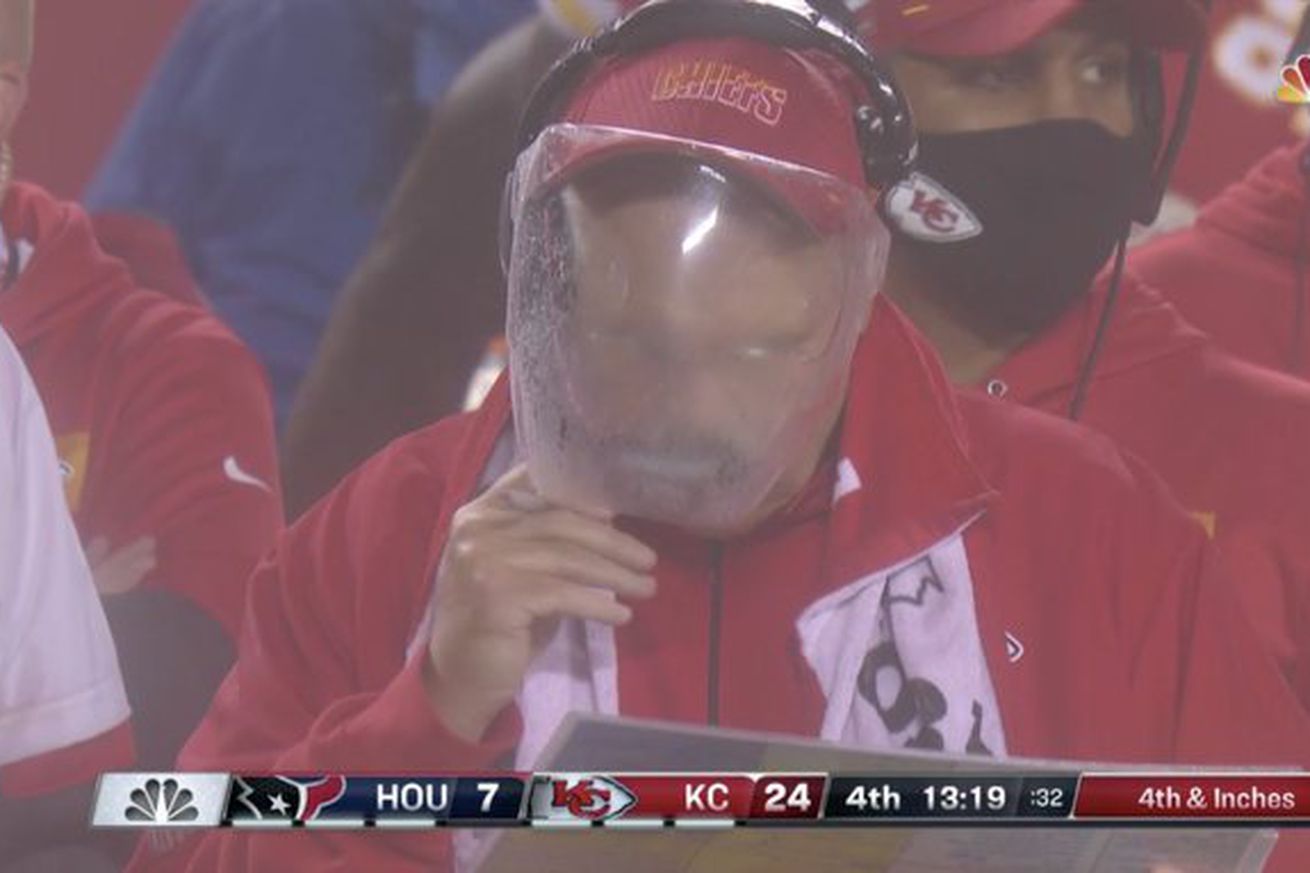 Shield Andy is the hero we all need.

Andy Reid standing on the sideline in a full face shield while thousands of fans attended a football game in the middle of a pandemic was easily the most hilarious juxtaposition sports has given us this year.

Kudos to Reid for trying to protect himself. In many ways he helped set an example for people. He also showed us what happens when you wear a plastic face shield on a humid football field while trying to spit out plays.

It began simply, with some fog.

Andy Reid with the full visor over his face for tonight’s game. pic.twitter.com/yEzJSqsARD

If anything this is an effective cautionary tale to show us just how much we gross-up the air just by breathing. Learning moment, thank you Andy.

Then it got worse …

LUKE … I AM YOUR HEAD COACH pic.twitter.com/p6sHxg3mmI

In stage two Reid’s mask fog was so pronounced drips began forming. His eyes were still clear, but everything south of the nose was starting to become a face swamp. Andy could have shot his tongue out like an iguana and drew a little smiley face below his condensation drips just to let us know he was okay in there.

Then it became this …

Andy Reid showing off this year by outcoaching the rest of the NFL without actually being able to see the field pic.twitter.com/v9FoDNZPKL

Andy Reid’s final form was a steam filled sweat prison. I wouldn’t have blamed him for being a little concerned about using an electrical device inside this personal sauna. It helps that Andy Reid naturally looks like the kind of dude who would use a sauna on a regular basis to complete this tableau, but I’m also worried he would have left the stadium with his pores so wide open that bystanders would mistake his face for a sink hole.

Please Andy, whatever you do, don’t let this gentle ribbing dissuade you from wearing your face shield in the future. It’s important for your personal safety, and also we need this. The Chiefs are so good they’ll probably be blowing out teams most games, so fans need to see your increasingly sweaty face become the sub-theme of the NFL season. I love it. We all love it — and hey, I’m sure your face will be glowing all year long.