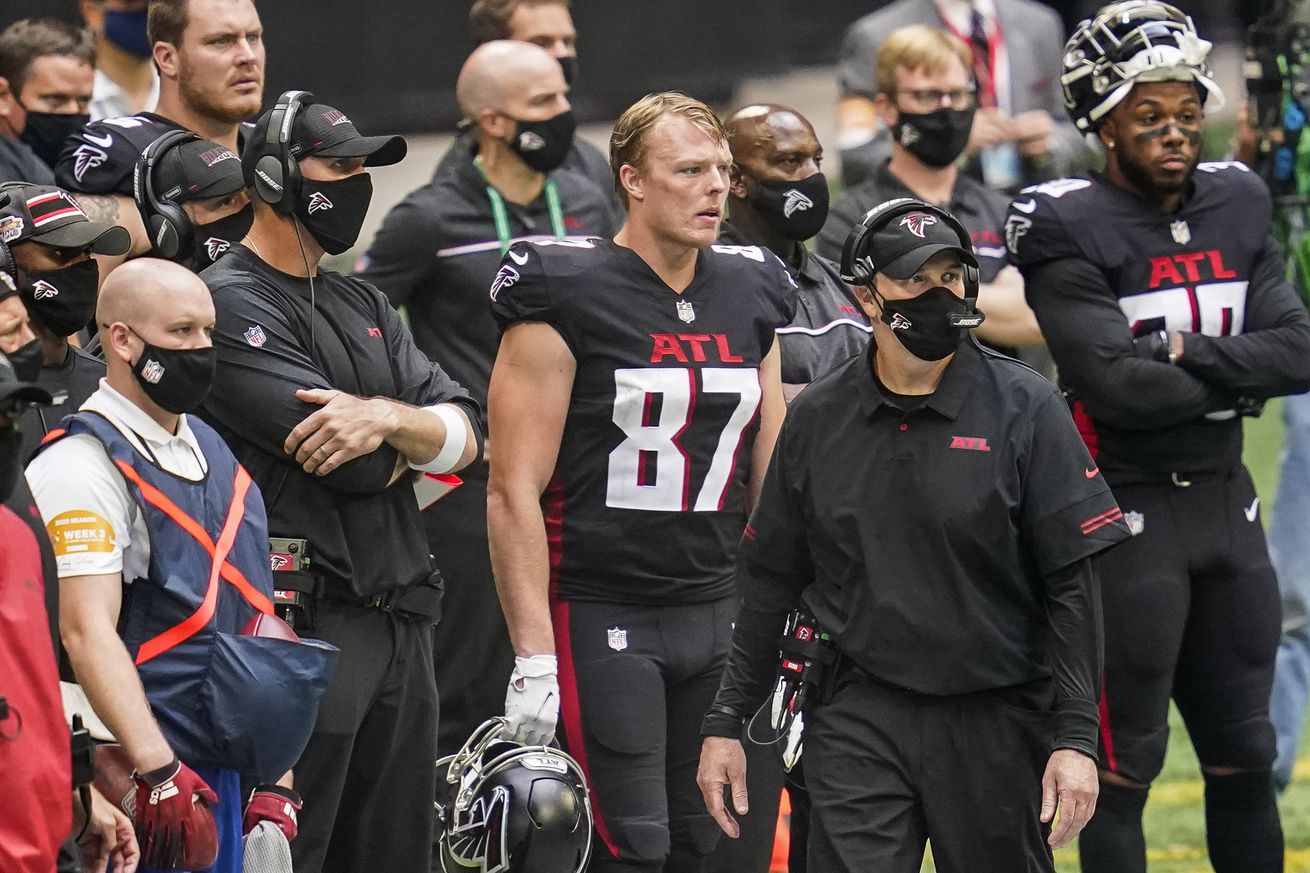 The Falcons choked again in the fourth quarter, this time against Nick Foles and the Bears.

The Atlanta Falcons looked like they were poised to get their first win of the season in Week 3 against the Chicago Bears. The Falcons headed into the fourth quarter with a 26-10 lead. Matt Ryan and Calvin Ridley were carving up the Bears defense, while Chicago had pulled starting quarterback Mitch Trubisky early in the third quarter after several missed throws. If Nick Foles was going to lead Chicago on a comeback, it appeared he missed his chance when wide receiver Anthony Miller dropped a touchdown pass on fourth down with 10:43 remaining in the game.

When Atlanta got the ball back, they had 99.6 percent chance to win the game. The Falcons had blown a 20-0 lead last week to the Dallas Cowboys, but surely they weren’t going to collapse again. Right? Well, actually ….

HOW IS IT ALWAYS THE FALCONS?!

Week 3:
Falcons had a 26-10 lead. They lost anyway pic.twitter.com/ArOXwuJhvU

Yes, the Falcons blew it. Foles led Chicago on rapid comeback, firing three consecutive touchdown passes to give the Bears a 30-26 win. Atlanta fans won’t feel comfortable with a lead the rest of the season.

These aren’t just humiliating collapses for Atlanta — they’re historic ones. No team had blown two leads as big as the ones Atlanta held in the same season in the last 20 years, let alone in consecutive weeks.

Over the last 20 seasons, no team has blown multiple 15-point fourth quarters leads in a single season.

The Falcons just did it in back-to-back weeks.

Atlanta had everything going for them in this game. The Falcons had picked off Foles in the end zone on his first drive on a play that was originally ruled a touchdown catch for the Bears. Miller’s drop early in the fourth quarter made it two scores off the board for Chicago that had originally been ruled as touchdowns.

An Atlanta offense that was getting the best of the Bears suddenly started to fall flat. The Falcons had three straight three-and-out possessions in the fourth quarter, and then Ryan threw an interception on the final drive. All the while, Chicago appeared to finally unlock something with Foles in at quarterback.

Bears coach Matt Nagy had seen enough after Mitch Trubisky overthrew Miller on a likely touchdown late in the second quarter. Foles took the field early in the third and immediately started moving the ball, even if his first two would-be touchdowns were wiped off the board.

On their second drive of the fourth quarter, Foles connected with Ted Ginn Jr. for 29 yards on a fourth down pass to keep the drive alive. After running back David Montgomery moved the Bears within striking distance, Foles found tight end Jimmy Graham on a short TD toss.

When the Bears got the ball back after an Atlanta three-and-out, Foles hit Allen Robinson on a curl route, then saw him bust a long run after the catch into the end zone.

Chicago was still down three after a missed two-point conversation following Graham’s touchdown. The Bears started their drive on the Atlanta 44 following a punt. After two unsuccessful plays, Foles found Miller on a 28-yard touchdown pass down the middle of the field.

It was a great throw from Foles under the pressure of a pass rush, but the only thing anyone will want to talk about is how Atlanta had blown another big fourth quarter lead.

His 3rd TD of the 4th quarter and the @ChicagoBears have taken the lead! #DaBears

This loss comes on the heels of Atlanta blowing an even bigger lead to the Cowboys in Week 2 when they strangely refused to jump on an onside kick that would have allowed them the chance to ice the game.

Even a week later, this is still remarkably frustrating to watch whether you’re a Falcons fan or not.

Blown leads were a sore subject in Atlanta well before this season. You might remember when the Falcons famously blew a 28-3 lead in Super Bowl LI against the New England Patriots. We made an entire YouTube video about it:

The loss drops Atlanta to 0-3. While the Bears are 3-0, they certainly haven’t been very convincing on their way to an undefeated start.

Nothing in sports feels worse than watching your team blow a game that looked like a for sure win. Falcons fans know that better than anyone.