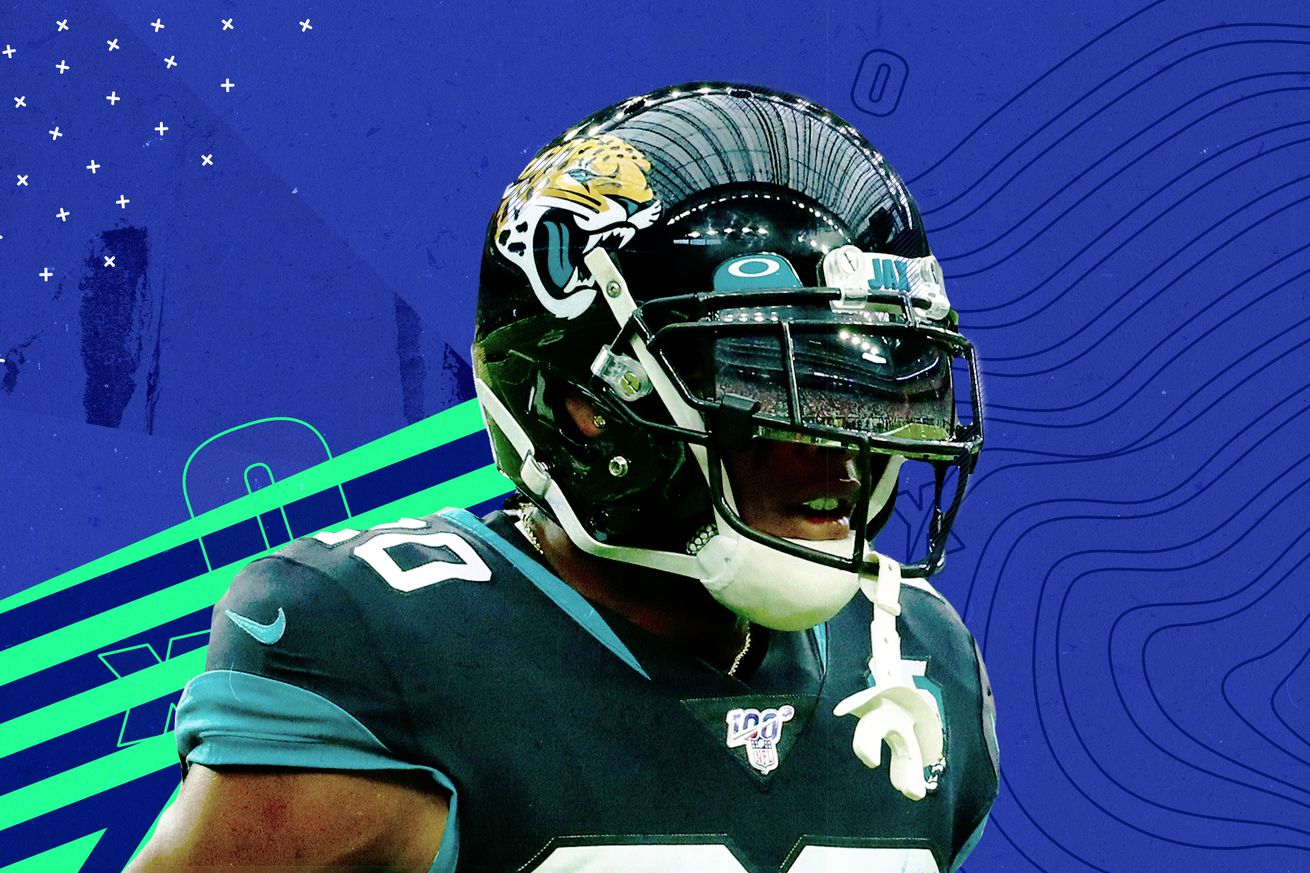 Jalen Ramsey has requested a trade from the Jaguars.

In the last two years, the Jaguars have made all the wrong moves and alienated their best players.

Jalen Ramsey has been every bit the player the Jacksonville Jaguars hoped he’d be when they drafted him top five in 2016. But now the two-time Pro Bowler wants out.

It’d be easy to say his Week 2 sideline spat with Doug Marrone is the reason why he’s requested a trade. The reality, though, is that the cornerback’s frustrations with the team have been brewing for a long time. And frankly, how could they not be?

Twenty months ago, the Jaguars played in the AFC Championship against the Patriots. Had it not been for a poor officiating call in that game, the Jaguars likely would’ve gone to the Super Bowl too. In the nearly two years since, everything has fallen apart.

Jacksonville has done everything possible to alienate its best players and create the mess it currently has on its hands. Worst of all, the Jaguars are just plain bad. They’ve won just two of their last 14 games, and all that losing has taken its toll.

“I just want to fucking win,” Ramsey said in a press conference less than 24 hours after reports surfaced of his request for a trade. He didn’t say much else during his presser, a change of pace for a player who’s refreshingly honest — sometimes to a fault — about his thoughts. This time, he didn’t have to spell things out, though.

The Jaguars are 0-2 and it’s clear Ramsey has lost faith that its an organization capable of turning things around. It’s hard to blame him, considering the mistakes the team has made to slam its Super Bowl window shut.

Jacksonville’s 2017 season was a success because of its elite defense. No team in the NFL allowed fewer points, yards, plays, or time of possession per drive than the Jaguars that year. That defense forced a franchise-record 33 turnovers and finished with 55 sacks.

Yet, the one player who was rewarded handsomely for the Jaguars’ deep postseason run was turnover-prone quarterback Blake Bortles. He signed a three-year, $54 million contract with Jacksonville that included $26.5 million in guarantees, despite finishing that 2017 season 20th in passer rating.

It, unsurprisingly, blew up in the Jaguars’ face.

Bortles didn’t magically transform into a quarterback worth that kind of money. He continued to throw too many interceptions and struggled when injuries wiped up much of the offensive talent around him in 2018. He was released after the season and the Jaguars are eating $16.5 million in salary cap space just to have Bortles off the team.

The significant investment for the Jaguars in the 2019 offseason was again at quarterback. The team dished out a four-year, $88 million deal to Nick Foles with $50 million guaranteed — bidding against themselves in the process.

Why did the #Jaguars pay so much for Nick Foles if there were no other big bidders? We discussed here. pic.twitter.com/QOiulR6dcH

It’s not the Jaguars’ fault that Foles suffered a broken clavicle less than 10 minutes into the season. It is their fault that the overpriced contract is a big reason why salary cap space is running low.

It wasn’t until the end of August when a key defensive player finally got a contract. Myles Jack — a player who wasn’t a member of the Pro Bowl sextet in 2017 — signed a four-year, $57 million contract before the 2019 season began.

But in the time between that AFC Championship run and Jack’s extension, much of the dominant defense was gutted. Defensive tackle Malik Jackson and safeties Tashaun Gipson and Barry Church were all released, defensive end Dante Fowler Jr. was traded to the Rams, and cornerback Aaron Colvin left in free agency.

Ngakoue, who tallied 29.5 sacks in his first three seasons — more than any other player in his draft class — held out from training camp in hopes of a new contract and didn’t get one. Ngakoue isn’t even half the mercurial personality that Ramsey is, but voiced his displeasure about how the negotiation played out.

#Jaguars DE Yannick Ngakoue: “They had a chance to sign me for a long-term deal but it didn’t get done. It is what it is. I love football, love my teammates, and I’m here to play games.”

Could a deal get done before the season?

Ramsey also made his desire for a new contract known in 2019 and was told it wasn’t even worth asking.

That decision makes sense with Ramsey under contract through the 2021 season, thanks to the fifth-year option on his rookie deal.

However, three of the four players picked ahead of Ramsey in the 2016 NFL Draft — Jared Goff, Carson Wentz, Ezekiel Elliott — have already signed lucrative extensions that make them among the highest-paid at their respective positions. Meanwhile, Ramsey is making about $3.6 million in 2019, despite having a strong argument as the top cornerback in the NFL.

While he wants a raise, Ramsey brushed off the suggestion that it’s the reason for his trade request. But he did mention that he was happy to see Jack get a contract extension, and told the media multiple times that Ngakoue deserves one too.

Ramsey’s dissatisfaction with the Jaguars’ roster-building strategy is understandable, especially when the team is terrible on the field too.

The Jaguars’ coaching is failing its talent

One of the most surprising aspects of Jacksonville’s fall from grace was the amount of coverage busts allowed by the previously dominant defense. For some reason, the Jaguars opted to play a puzzling amount of zone defense in 2018, leading to coverage lapses.

That’s been true in 2019 too. The Chiefs carved up the Jaguars in Week 1, recording 491 total yards and 40 points due to gaping holes in the Jacksonville secondary.

The Jaguars defense has too many veteran players to make those kind of mistakes, but it’s also worth questioning why the team is playing that way. There was no secret sauce to Jacksonville’s success in 2017: It bullied teams up front and locked down receivers with a pair of top-flight cornerbacks.

Ramsey is fed up with the team not getting back to what made it great in the first place:

One of the best pure cover corners, Jalen Ramsey wants to play man-to-man and lock a WR down. One issue has been having him play zone https://t.co/7RIlT8bx4X

Two decisions by head coach Doug Marrone from the Jaguars’ 13-12 loss to the Texans have been called into question after the team’s 0-2 start. The Jaguars chose not to ride Gardner Minshew’s momentum, taking the ball out of the quarterback’s hands on a final two-point conversion try. Marrone also opted to ignore Ramsey’s pleas for a challenge earlier in the game.

The latter resulted in a blowup on the sideline.

It certainly feels as though the moment was the straw that broke the camel’s back. If the Jaguars were still winning and dominating defensively, the bickering would’ve been brushed off, if it even happened at all. Alas, nearly two years of bad choices by the Jaguars led to the molehill quickly becoming a mountain.

The situation doesn’t need to be resolved ASAP

This saga likely ends with Ramsey getting traded. The Jaguars are reportedly asking for two first-round picks, and there’s a good chance they get it — or at least something close.

In the meantime, Ramsey’s going to continue to play good football. He said as much in his press conference, and it’s in his best interest to continue proving he’s worth a pricy investment.

For now, that’s a good situation for the Jaguars to keep benefitting from. Ramsey’s teammates seem to have his back, he says he’s focused on helping the team win, and — if the Jaguars choose to trade him — his value will be just as high after the season as it is during it.

Perhaps the Jaguars make significant changes to the coaching staff and front office before a trade happens. It’s not that far-fetched considering the Jaguars can’t find wins. And perhaps a new regime would entice Ramsey to stay. Reconciliation is probably a long shot at this point, though. Either way, there’s no reason for the Jaguars to rush to offload their best player while he’s helping them in the present.

Then again, it’s hard to trust the Jaguars to handle the situation any way other than poorly. Their bumbling decision-making got them into this mess and it probably won’t get them out of it.