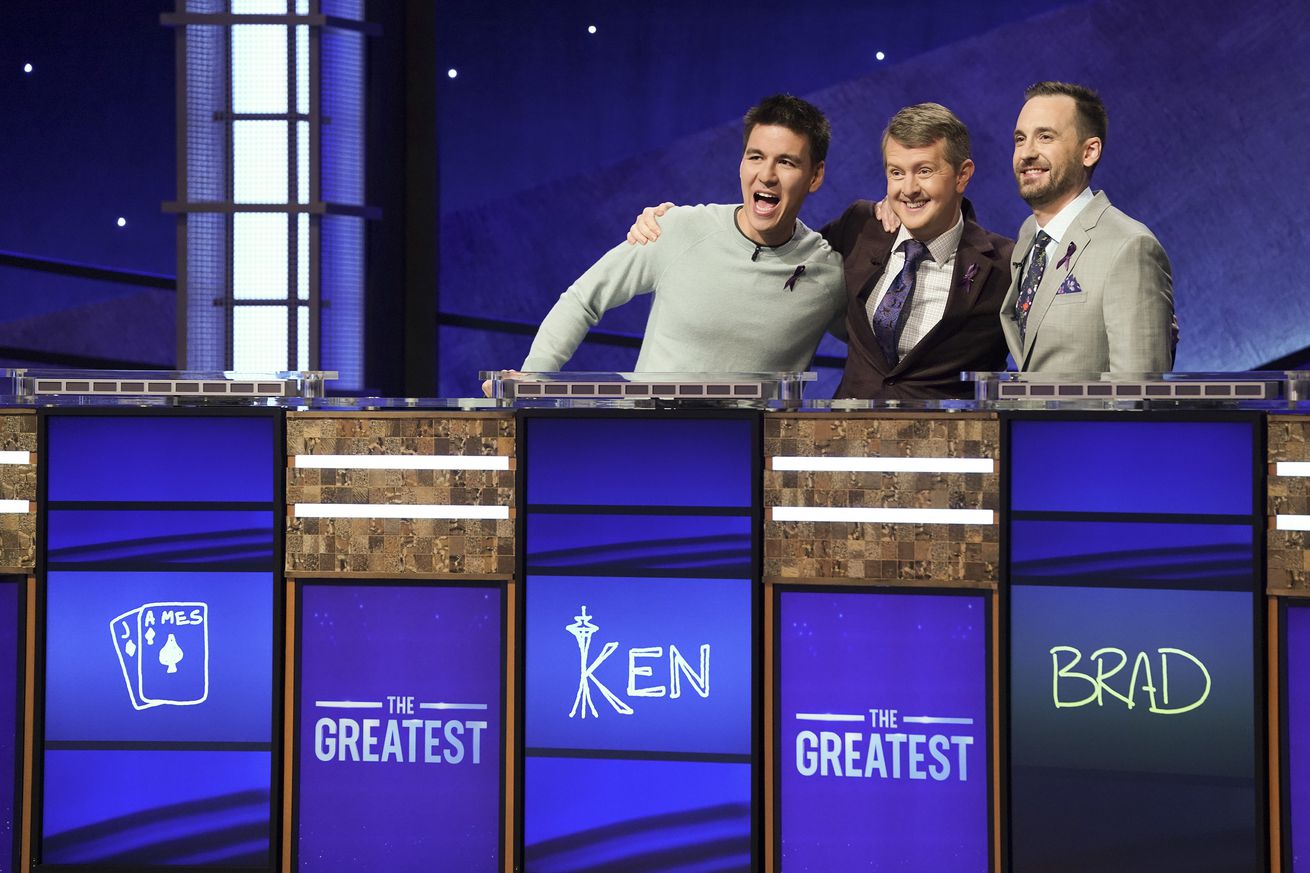 Great competition, trash talk, and a best-of-7 series sure feels like sports

The classic Jeopardy! format is a single match. Three players compete in two full rounds and Final Jeopardy to determine a winner. The various Jeopardy! champions tournaments over the years usually adjust the formula by making the finals a two-match affair. The Greatest of All Time tourney takes the competition to another level. Each episode of the competition is an hour long, comprised of two games. The contestant with the best cumulative score across both games is declared the winner. The tournament is a hybrid best-of-7 format, with the first contestant to three wins declared the Greatest of All-Time.

If seeing “*if necessary” in a schedule wasn’t enough to convince you that the Jeopardy! Greatest of All-Time is sports, consider these other factors.

The contestants are a who’s-who of Jeopardy! greats, the three most celebrated contestants in the show’s five-decade history (well, three of the top four, along with Weird Al Yankovic, obviously).

Rutter’s original run on the show was in 2000, back when returning champions were capped at five appearances. So while his original performance wasn’t as eye-popping as Jennings’ and Holzhauer’s, Rutter has since won every official Tournament of Champions he has entered, and owns the distinction of having never lost Jeopardy! to a human opponent (though he and Jennings both lost to the IBM computer Watson in 2011).

Answering trivia questions certainly isn’t as physically taxing as, say, running routes in the NFL, but there’s a diminishing competitive window in both disciplines. During a profile of Jennings that aired during Game 1, the 45-year-old lamented, “It’s been 15 years since I was first on Jeopardy!. I don’t have too many more chances to be in my Jeopardy! prime.”

The three contestants are friendly with each other, but they maintain a healthy competitive spirit, too.

During a break in the action during Game 2, Jennings explained to host Alex Trebek that he mostly competed against the board and not the other players … until he watched Holzhauer’s aggressive play during his 2019 winning streak. As Jennings described his desire for a fun, low-stakes game, Holzhauer interrupted with, “I hate fun.”

Holzhauer was partially joking, but partially not.

“Who wants to play a fun, low-stakes game?” Holzhauer told Trebek during his interview. “Look at the resume these two are bringing in. I know I have to set the bar super high, and hope they can’t clear it.”

Amid the battle, the trash talk between the three has been fun, both in-person during the game and online. In Game 1, Holzhauer buzzed in before Rutter, a Pennsylvania native, to answer “Philadelphia,” and took the opportunity to taunt his foe.

James Holzhauer out here taunting in the middle of a game of Jeopardy lol #JeopardyGOAT pic.twitter.com/xRDjqSbVGM

The back-and-forth on social media among the players has been fun, and sometimes spicy.

It’s all about timing on the button.

BREAKING: I have decided to follow @James_Holzhauer on Twitter, since he’s been following me on Jeopardy all week.

While answering the Game 2 clue, “Lambeau knows this 118-mile-long inlet that receives the waters of the Fox River,” Chicago Bears fan Holzhauer buzzed in and replied, “Green Bay, boooooo,” while giving a thumbs down.

Game 3 was already decided by the time the second Final Jeopardy came around. Rutter knew he was defeated, so instead of guessing at the clue about 21st century Oscar winners, he shouted out the Philadelphia Eagles’ win in Super Bowl 52. His wager was the score of the game. He added “Go Birds” as it was revealed.

The tone was set immediately in Game 1. In the first half of the first match, all 30 clues were answered correctly, with no incorrect guesses. There wasn’t even a hint of hesitation on any of the answers. This was the Jeopardy! equivalent of a baseball no-hitter.

Through three games, the three contestants have combined to answer 90.6 percent of questions correctly. Jennings and Holzhauer, in particular, have stood out.

Jennings, Holzhauer, and Rutter have combined to answer, on average, 56.2 of a possible 60 clues per game in their six tournament games so far. During the current season of Jeopardy!, each episode averages 50.26 correct answers, per J! Archive. These three are clearly the best of the best.

The style of play has been aggressive, as well. All three have adopted the high-risk, high-reward strategy employed by Holzhauer, a professional gambler. The higher-value clues get picked first, with the top two rows — $200 and $400 during the Jeopardy round, $400 and $800 during Double Jeopardy — routinely picked last in an attempt to both maximize the points available to wager in a daily double, and to find the daily doubles themselves. After all, daily doubles are very rarely in the top two rows.

Through three games and six matches, every daily double wager has been either a true daily double, or the maximum bet if it’s more than the player has available. These players are going for it. Jennings has even adopted Holzhauer’s signature “all in” gesture.

We have the very best contestants playing at a high level, and mixing good-natured trash talk and sports references into the competition. It’s no wonder that people are tuning in. Jeopardy! Greatest of All Time has been so much like sports in a lot of ways, but especially in the ratings.

More than 14 million people watched the first two games of this contest, with Game 3 pulling in more than 15 million. That’s more viewers than every Monday Night Football game but one this season.

ABC pays $1.1 billion annually for Monday Night Football. The GOAT Jeopardy! broadcasts beat out every MNF game this year except one (Data from @ApexMarketing) pic.twitter.com/DB8wug7Lqv

Each episode of the series has been watched by more people than any other other entertainment program (i.e., excluding “traditional” sports) this season except for The Golden Globes. All three Jeopardy! Greatest of All Time games so far have had higher ratings than each of the first four games of the 2019 NBA Finals, and the first five games of the 2019 World Series, per The Hollywood Reporter.

There’s no doubt about it: Jeopardy! is sports.