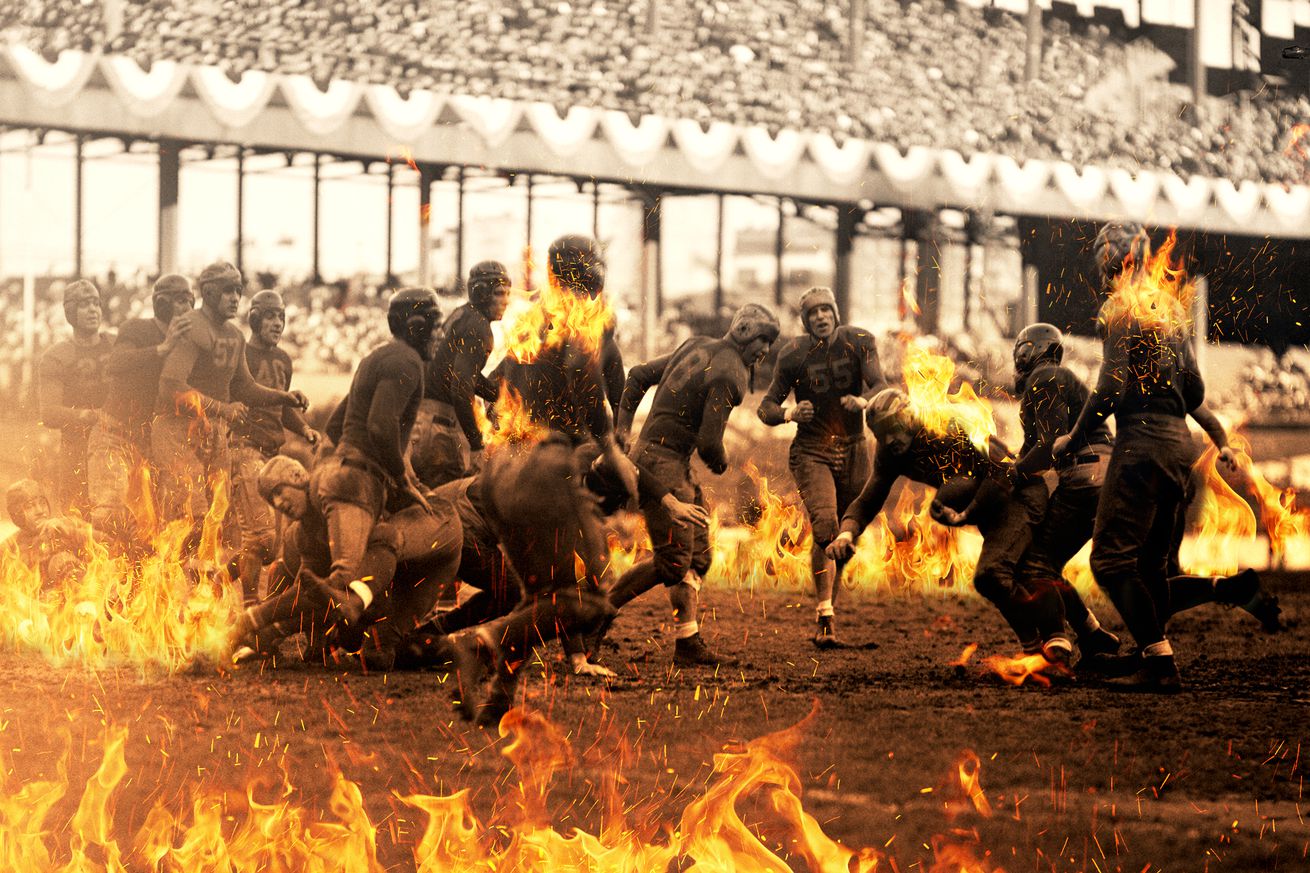 “Failed to block, tackle, run and pass in pro-league fashion.”

As I write this the NFC East is on fire. No matter when you’re reading this, it will still be on fire. If anyone suggests otherwise, they are in the act of sweeping the fire under a rug, which serves to only hide and then re-fuel the flames.

It’s amazing. The NFC East is like a bunch of farmers who heard about slash-and-burn agriculture but didn’t check the instructions. They heard “fire” and “profit” and so tried harvesting crops by setting them on fire then threw fresh seeds into the flames while shrieking about all the prize-winning gourds they produced in the past. But instead of the farmers being forced to learn new, better, less evil methods, a multi-billion dollar organization said, “what if we let these idiots burn stuff in primetime slots?” The behavior of the NFC East has been normalized over decades of ineptitude that’s broadcasted to millions of viewers. Their acts of debauchery are even expected. One could argue that by this point it’s a tradition.

Let’s take a walk. Please stretch first — this is a long but familiar journey.

We’re going to November 3rd, 1935. The Philadelphia Eagles had traveled to Fenway Park to play the Boston [REDACTED]s who we now know as the Washington Football Team. Both teams entered this week seven matchup with just a single win, both averaged six or fewer points per game, and both teams w… oh shit, congratulations! You just intercepted the football!

These teams were bad. The NFC East wouldn’t actually be a thing until 1967, but I’d argue that inspiration for the dumpster fire it has become arose from this game.

Boston managed to open the scoring with a 43-yard run (or 57-yard, accounts differ). Ernest Dalton described the afternoon in The Boston Globe and on this specific run, the ball carrier went right until his teammate yelled “cut back.” The runner then went left, and as Dalton put it, “[the] advice was great, as the ex-Western Maryland flash shot into the clear and headed for a touchdown.”

That presents quite the scene for our imagination: Two teams so inept that a spectator masquerading as a player could holler for his buddy to just run the other way where no one was — something the runner, in this telling, hadn’t seen for himself — and the defense didn’t also hear, or at least elected to not react to. Boston then missed the extra point.

Six points should’ve been good against Philadelphia, who boasted the only offense in the league worse than Boston’s. But Eagles know how to fly and they went to the air for a 55-yard strike of their own. The ensuing extra point looked like a potential nail in Boston’s coffin despite the game still being in the second quarter. Each team had used up their one moment of splendor. Let’s go to Dalton again for the extra point.

“…the ball smacked the post, bouncing to one side. The referee didn’t know how to call it, but the field judge on the other side of the uprights did, and he called it a goal, so the Eagles led, 7 to 6.”

The game was far from over, but the scoreboard’s day was done. However, the forefathers of the NFC East still produced an extremely on-brand set of highlights:

By the end of it, the teams combined for 11 interceptions and at least two fumbles. 9,000 people witnessed this attempt at football, a vision summed up by Dalton as two teams that, “failed to block, tackle, run and pass in pro-league fashion.” Had Dalton watched any matchup of NFC East teams in 2020, he could easily reuse that line. It’s hard to think the teams involved even really want to improve at this point — or at least it’s a case of folks who confuse “laughing with” and “laughing at.”

Now, this isn’t me discouraging anyone from trying to be the best version of themselves. Just because the NFC East has long struggled to break free from some self-applied restraints doesn’t mean that they deserve to be bound by their misfortune forever. While there is a long tradition of them forgetting how to football, maybe that’s just kinda their thing. Maybe the lines have blurred a little between “tradition” and “kink.” If a bunch of consenting adults like to gather on Sundays to get nasty together while millions of voyeurs voy, who are we to judge? It’s not for us to yuck their yum.

As long as you keep the fire contained — flame on, NFC East. Flame on.