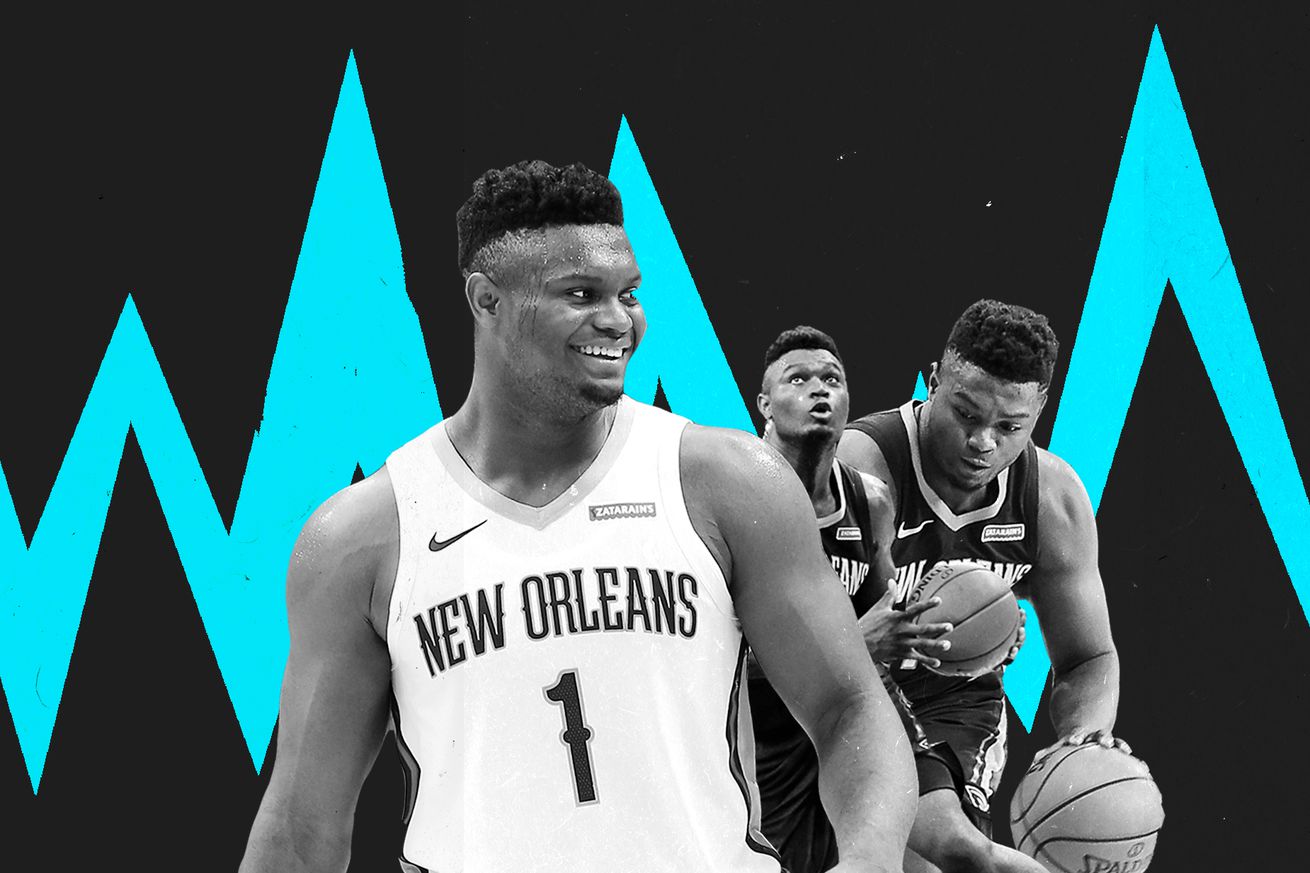 When Williamson starts rumbling downhill, defenses have no chance to contain him.

New Orleans has already figured out how to get the most out of their star rookie.

That opening statement sure packed a hell of a punch. If there was any doubt that Williamson’s aerial tank might sink against NBA athletes, that one slam erased it. But it was also a significant opening statement for Pelicans coach Alvin Gentry, albeit in a more forensic way. The highlight resulted from a well-executed set play that conveyed the central philosophy to the Pelicans’ plans to build an offense around their human bowling ball’s unique skill set: give him as much of a head start as possible and watch him do the rest.

The play, at least in public terms, is known as “21 Keep Cut 4.” (NBA teams disguise their set plays by using their own language to describe them, so the Pelicans likely call this something else).

“Twenty-One” has become synonymous with a broad series of alignments known as “Pistol,” in which two guards come together near the sideline for some sort of two-man action, with a big man lurking near the top of the key to screen for whichever guard keeps the ball. (If you want to go deeper, this is the simplest explainer I’ve read on “Pistol.”) Twenty-one simply refers to the two positions involved: off guard (2) and point guard (1). The “4” in “Keep Cut 4” refers to Zion Williamson’s position.

As for “Keep Cut?” Oh baby, that’s the fun part. That’s when the Pelicans gets to decide if the lane is sufficiently open to hand the ball off to a human wrecking ball on the move and watch him zoom down an open lane. This highlight certainly qualifies.

Look at where Williamson is standing when the play begins.

He stops at half court and crouches down, like a sprinter coming off the blocks. As he catches Jrue Holiday’s pitch, the Hawks are communicating coverage plans. By the time they figure them out, Williamson has already left DeAndre Bembry and John Collins in the dust. In that moment, the game looked more like football, with Holiday at quarterback and Williamson the between-the-tackles running back catching a toss and hitting the hole at blistering speed.

You can run this play for anyone, and indeed the Pelicans do. (The version with Nikolo Melli instead of Zion is, uh, less exciting). But there’s a reason the Pelicans showed it off so early in preseason. It showed exactly how they plan to maximize their rookie sensation, at least early in his career.

The Pelicans’ offense is built around a simple idea: there’s no stopping the Zion Williamson freight train once the engine gets started. That’s why they’ve done everything possible to give Williamson that head start, whether it’s through set plays like 21 Keep Cut 4 or more free-flowing spacing tactics within the run of play.

You also might see plenty of this sort of thing, especially with sharpshooting J.J. Redick on the floor.

The play looks like a double screen for Redick to curl for an open shot from the corner, but New Orleans layers on a second screen for Williamson to catch and charge down the lane. Help defenders must honor the threat of Redick’s shooting, so they’re outnumbered when trying to account for the play the Pelicans really want to set up.

The funny thing is the Bulls actually defended the play well, at least by traditional standards. Lauri Markkanen went under Derrick Favors’ second screen nicely to meet Williamson and seemed to have him cut off. But that’s when the real effect of giving Williamson a running start comes into play. Because Williamson is such a bowling ball of fury, he’s still able to go through Markkanen to get to his spot before reverse pivoting back the other way when Markkanen inevitably loses his balance trying to keep up.

That power is the key element of Williamson’s unique game that separates him from unicorns of the recent past. He’s not the first athletic marvel to come into the league without a jump shot. He’s not even the first one who compensated by playing on the move in an attempt to build up speed defenses theoretically can’t match. The Pelicans’ philosophy is similar to Philadelphia’s with Ben Simmons and Milwaukee’s with Giannis Antetokounmpo. The difference is that Williamson’s girth allows him to power under and through defenders when they meet him on his drives, as opposed to gliding around them (in Simmons’ case) or leaping above them (in Antetokounmpo’s).

That low center of gravity has a double effect: it helps him get to the basket when others wouldn’t, and it allows him to convert so easily against taller rim protectors. In his first four preseason games, Williamson made 32 of his 40 shots in the restricted area while shooting eight free throws a game in just 23 minutes per contest. All of those numbers are staggering.

There’s almost nothing a defender can do to position themselves properly when Williamson comes at them with a head start. The second he gets his shoulders level with the defender’s, he’s past them. There’s no angling him off at this point.

Taking a charge is pointless because Williamson’s agility and leaping ability prevents any head-on collisions. Jumping far is one thing, but Williamson also jumps high to avoid running dudes over. More importantly, he can glide sideways, planting either foot in one direction to then leap in the other. It’s as if he possesses a floating Eurostep, which comes in handy when defenders are still reacting to his initial move.

Taking a charge won’t work, but neither does staying vertical and trying to contest with length. Just ask Rudy Gobert, the best rim protector in this league.

The Spurs and Jazz asked their centers to defend Williamson, only to watch him gobble up the space they gave and finish through them at the basket. That happened because Williamson consistently negated their length advantage by jumping into their chest, shoving them back, and scoring with the space that move yielded. You try holding your ground with your arms up while someone is jabbing you in the chest. Now imagine a 284-pound dude doing that to you after getting a running start. That’s the predicament every center now faces when they play the Pelicans.

Every philosophical decision has trade-offs, and the Pelicans’ running start approach with Williamson is no different. Plays that begin with him standing still — notably isolations and pick-and-rolls where he’s handling the ball — may not be prominent parts of the Pelicans’ playbook for some time. He will need others to initiate offense for him to start, so get ready for a lot of dribbling from Holiday (good) and Brandon Ingram (less good). Opponents will adjust their defensive strategies as they gather more game tape on Williamson’s tendencies, because they always do. And big picture, the Pelicans playing specifically to Williamson’s strengths now doesn’t mean he shouldn’t eventually shore up his weaknesses. (Key word: eventually).

Still, the Pelicans have sent an early message to the rest of the league: give Zion space at your own peril.