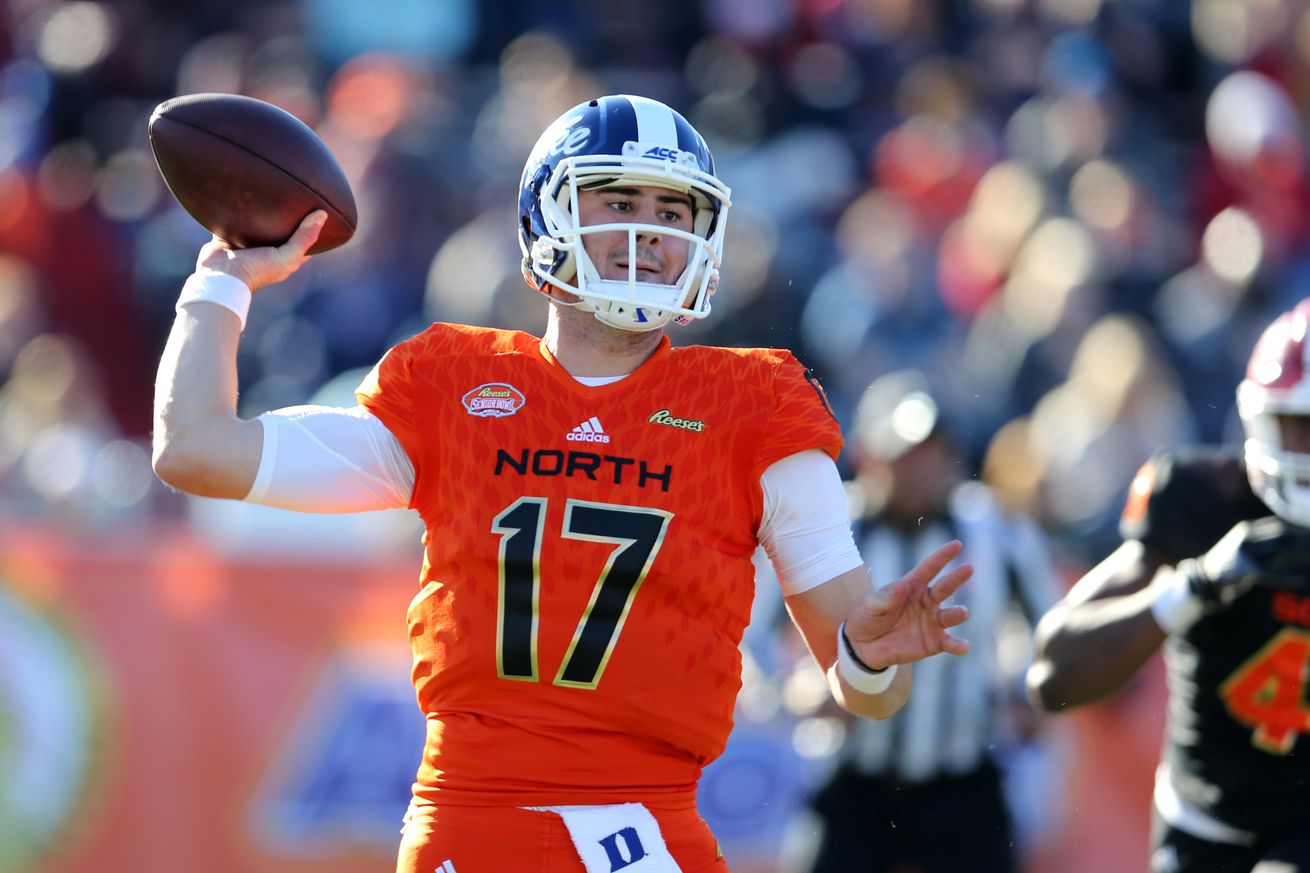 The New York Giants shocked the football world by selecting Duke quarterback Daniel Jones with the sixth pick in the 2019 NFL Draft, making him their quarterback of the future.

There are a lot of reasons why this is a head-scratching pick. Jones was one of the least productive quarterbacks in the entire draft, Ohio State quarterback Dwayne Haskins (who ended up going to division rival Washington) was still on the board, and there were still plenty of impact defensive players left to bolster the Giants’ defense.

None was more confusing than the reason why Giants general manager David Gettleman pulled the trigger on Jones.

Oh boy, there’s a lot to unpack here:#Giants GM Dave Gettleman was asked when in the process he realized Daniel Jones was “his guy”. His response: (4:52-6:53)https://t.co/e12yewrr5r pic.twitter.com/nlttftcf3S

Gettleman (who, it should be noted, thought Haskins played in the Big 12) admitted that he didn’t get to see Jones play in person during the season. It wasn’t until the Senior Bowl — an exhibition game — that he got that chance. Then Gettleman was sold on Jones as the Giants’ future franchise quarterback after three series.

Three series. In the Senior Bowl.

That’s utterly wild, considering the rules of the Senior Bowl.

The Senior Bowl is a watered-down version of what prospects will see in the NFL. There are a handful of rules to reduce injury risk while keeping the game as simple as possible.

Here are some of the rules the Senior Bowl has in place for the game:

There are no blocks allowed below the waist.

Motions and shifts are not allowed — even by eligible receivers.

Trips formations with three receivers on one side of the formation are not allowed.

The defense is not allowed to blitz extra defenders. Only four rushers are allowed on any given play.

If teams want to run zone coverage, they’re only allowed to have two players deep or three players deep.

Man coverage can only be run with a single free safety on the field.

In man coverage, the deep safety must be in the middle of the hash marks by the time the ball is snapped.

In man coverage, the safety not playing deep must be playing man coverage on someone, unless their intended coverage target stays in to block.

So, it’s not like a normal football game at all. And that’s fine for the purposes of an all-star game where NFL prospects are months away from a big-time payday. But how is it possible for a general manager to fall in love with a quarterback in this setting?

The sample size is just so small and the rules aren’t even the same as regulation football that we watch every Sunday. Every quarterback at the Senior Bowl should look like a “professional quarterback” given the nature of the game.

In recent years, Nathan Peterman completed nearly 70 percent of his passes in the 2017 version of the game, then went on to be the human avatar of the god of professional failure. Josh Allen averaged 12.2 yards per attempt in the 2018 Senior Bowl and just 6.5 yards per attempt as a rookie for the Bills. 2018 MVP Kyle Lauletta averaged an absurd 16.5 yards per pass, then languished behind Eli Manning on the Giants depth chart, failed to complete a single pass as a rookie (0-5, 1 INT), and inspired enough confidence to make Gettleman jump for Jones this year after three series.

Gettleman was only in this position because he randomly decided to stay for the game and watch it in person.

What if he didn’t? If he didn’t see those three series in an exhibition game with his own eyes, there’s a serious chance that Jones wouldn’t have been the Giants’ pick. Perhaps Gettleman not seeing Jones in person until the Senior Bowl was a blessing for Jones, considering Jones didn’t exactly light up his college competition.

Jones was the seventh quarterback in the last 11 Senior Bowls to earn MVP honors because, well, it’s not particularly hard for quarterbacks to win MVP in a game with lax rules that favor them.

But the Giants seem to be hoarding the market on Senior Bowl MVPs anyway. They also drafted Davis Webb and Lauletta, who were the previous winners before Jones. In the 2017 Senior Bowl game, Webb threw for 165 yards and a touchdown with 10 yards per attempt. Lauletta’s 198 yards and three touchdowns. Neither of them have had any success in the NFL.

Hopefully for the Giants, Jones ends up working out in their favor. But any success he might have won’t be due to his performance in the Senior Bowl, the light beer of college football games.