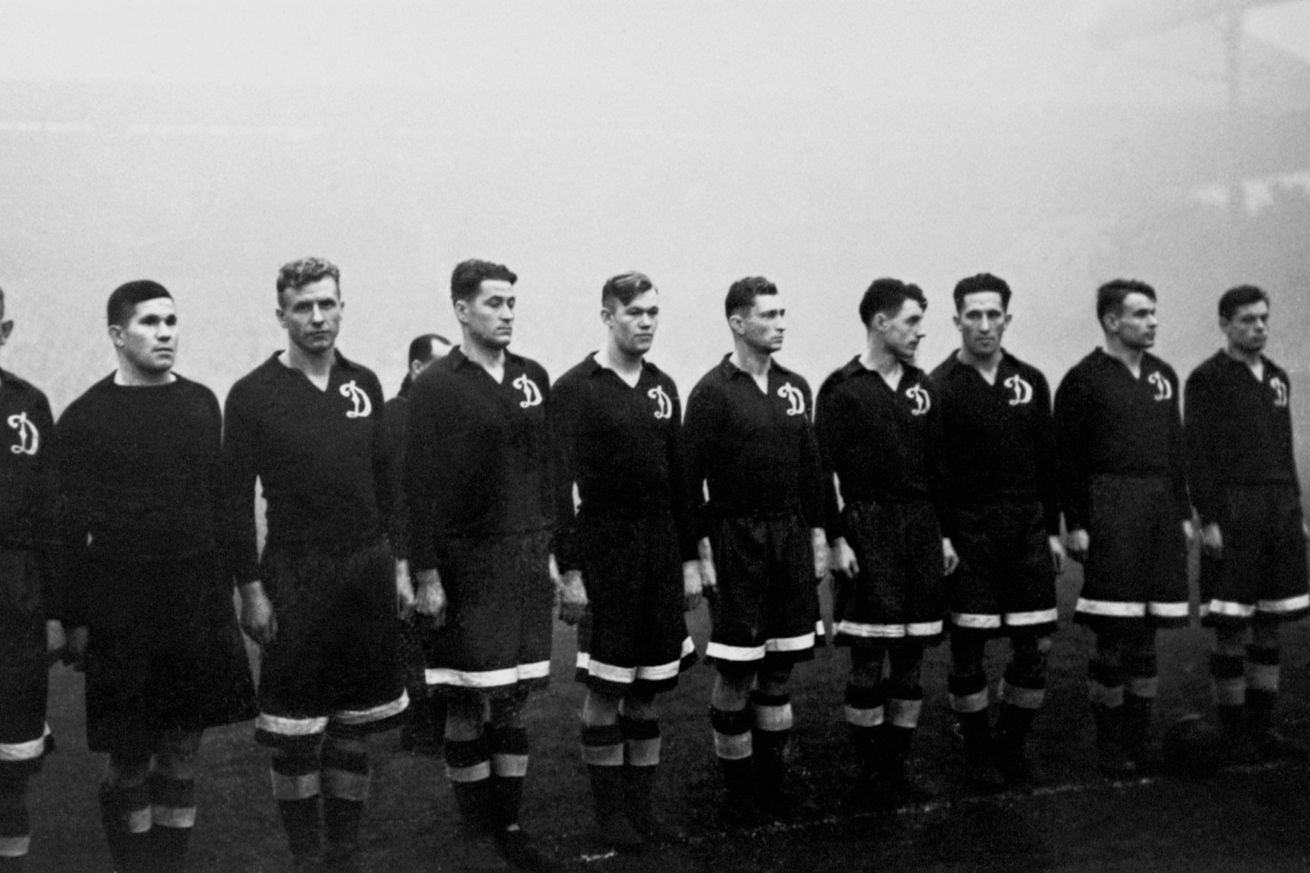 Arsenal and Dynamo Moscow once played a friendly in impenetrable smog. It was very silly.

On November 21st, 1945, London was witness — at least in theory — to a friendly between Arsenal and Dynamo Moscow. It was an unusual time in European history. The game was played during the intercalary between World War II and the Cold War, and while the tripartite alliance between the UK, USA and USSR had not yet broken up, the imperative for that alliance had vanished. In many ways, the gap between Japan’s surrender and the Berlin Airdrop were a sort of non-time, a drawing of collective breath before the two Powers of the post-war world began grappling.

Some wartime restrictions were still in effect in the UK. Food rationing would continue well into the 1950s. Naturally, sports were disrupted, too: England’s Football League wouldn’t resume until the ‘46/’47 season. The English appetite for football, however, was very much present, perhaps made even fiercer by deprivation. That demand was met, at least in part, by Dynamo’s autumn tour.

Dynamo had won their domestic league with an impressive record of 19-2-1, pipping rivals CDKA Moscow (now CSKA) by a single point. It is unlikely that the fans who greeted them upon arrival in Croydon had any knowledge of the state of Soviet football. To the British public, the USSR was perhaps more myth than reality. The Red Army’s wartime heroics were well-known, but details about their exploits or Stalin’s regime more generally were … less well known. The country was an enigma, and the football team were not so much a traveling team as the walking representation of that enigma.

Consequently, Dynamo were a massive draw. Almost 75,000 tickets were sold to the first match of the tour, a friendly against Chelsea at Stamford Bridge — the proceeds were donated to rebuild ruined Stalingrad — and thousands more snuck into the ground for the game. The Guardian reported some truly wild scenes:

Some of those unable to get a view climbed up the tall stand from beneath. The glass and corrugated iron roof creaked, to the alarm of those sitting underneath. At least two people fell through the glass and dropped among other spectators. Thousands swarmed round the touch line. The police repeatedly had to clear a way for the players take corner kicks. Once the referee stopped the play during a Russian attack and ordered the intruders back.

Equally wild was the way the Soviet side played. At the time (at most times, really), English football was addicted to being Extremely English, which manifested itself in a comfortable but totally spurious superiority. They’d never been exposed to sides who took pre-match warm-ups seriously, or took care to move defenses around by passing the ball at speed. Dynamo, widely supposed to be weak opposition unable to compete against top British sides, surprised and bewildered the Blues*.

*The hosts were also confused by the Soviet practice of giving their opponents bouquets of flowers before the game. Dynamo were equally flummoxed by an earlier offer of a post-training chocolate meringue.

Chelsea’s star player, Tommy Lawton, called the visitors “one of the fastest teams I have ever seen. They should have been four goals up in 20 minutes.” The defenders were baffled by Dynamo’s movement. The Soviets’ style utterly charmed the crowd, and when the hosts had somehow clawed their way into a 3-2 lead, the spectators were openly cheering against the Blues. The referee knew his job, allowing a late equalizer to stand despite Vsevolod Bobrov being several yards offside. Diplomacy — both towards the watching mob and the rather more distant Soviet regime — was the order of the day.

Diplomacy was not much in evidence against third-division Cardiff, who took a 10-1 pasting. Suddenly Dynamo, still totally opaque off the pitch, were recognized as apt competition for the best team England could throw at them. That team was Arsenal, champions five times in the 1930s. Due to the Gunners’ home ground having been in use for the war effort, they ‘hosted’ Dynamo at Tottenham Hotspur’s stadium instead. White Hart Lane was set for quite the show.

Then the fog rolled in, and opacity overstepped the bounds of metaphor.

It’s important to remember that ‘fog’ meant something very different in mid-century London. For centuries, the capital had been notorious for its poor air quality, and the industrial revolution did nothing to help matters. The city was plagued with ‘pea-soupers:’ noxious, impenetrable yellow clouds so frequent and so extreme that they killed plants, blackened buildings and directly impacted the evolution of some of London’s insects.

Pea-soupers were the hellish mixture of the natural mists and fogs of the Thames Valley and the industrial and domestic processes of a regulation-free mega-city. Over the years, the sulfurous fogs killed thousands of Londoners, a process which culminated in the Great Smog of 1952, which had a death toll of at least 4,000. Enough was finally enough, and the Clean Air Act passed Parliament four years later.

In 1945, the Clean Air Act was still more than a decade away, and on the evening Dynamo were due to play Arsenal a particularly virulent fog submerged North London. No ordinary match would have been played under those conditions. But the diplomatic situation and the footballing appetite of the 50,000 crowd meant that this was no ordinary match. Kickoff went as planned but for the fact that neither the crowds nor the referee could see much of anything.

Officiating a game through a severe pea-souper would have been challenging enough. Doing so without being able to speak with your linesmen? That was the situation which faced referee Nikolay Latyshev, whose English assistants didn’t speak a word of Russian and, for reasons unknown, hung together on one side of the pitch. Unsurprisingly, the game descended into farce.

Fans in the stadium reported seeing as many as four extra players take the field for Dynamo, although how they might have been able to tell is anyone’s guess. The Arsenal players, more reliable, suggested 12 Dynamos. Play was stopped, and 12 Dynamos were revealed, with one ordered off to make 11. But Arsenal shouldn’t even have been allowed that many: forward George Drury, upon receiving a red card, simply snuck back onto the pitch in a shroud of impenetrable fog.

The fog hid greater sins than mere trespass. Ronnie Rooke, complaining of an incident which left his head gashed open and bloody, told Reuters his opponents had not quite played fair:

In this country, a centre-half who continually meets the centre-forward late is penalised under the rule ‘ungentlemanly conduct’.

Given that the incident which sparked Rooke’s indignation also left a black eye on Dynamo captain Vitali Semichastny — the visitors also complained about the violent conduct of their opponents — one suspects the Arsenal man might have protested slightly too much. If you could call Rooke an Arsenal man at all, that is.

The Gunners, it turned out, had drawn upon teams across the country, fielding several England internationals as ‘guests’. Rooke was a Fulham player (and England international), but he was hardly the biggest name drafted for the occasion: that honor belonged to Stoke City winger Stanley Matthews, one of England’s all-time greats. His surprising presence caused a minor diplomatic incident, with Dynamo complaining to The Authorities that rather than playing Arsenal they had gone against an all-England team.

But really the visitors had no cause to complain, since they had also drawn liberally from their domestic competition to form their traveling side. CDKA top scorer Vsevolod Bobrov, for instance, was a temporary Dynamo, and it was Bobrov who scored the winner against Arsenal, bundling home to make it 4-3.

Was the goal legal? Who could possibly say? Arsenal insisted that Bobrov’s goal was well offside, as was an earlier strike from Sergei Soloviev. An Arsenal goal at 3-3 was disallowed under dubious circumstances. But without functional linesmen or the ability to see beyond a few yards, refereeing the match to any standard was an impossibility. It’s a miracle the scoreline looked even remotely plausible. Seriously, look at what they were playing in. It might as well have been calvinball:

Anyway, Dynamo beat Arsenal in a game that cannot have been said to have been seen in its entirety by anyone at all, not least the 50,000-plus who showed up to watch it. After the minor contretemps caused by the presence of Matthews et al on the Arsenal team was defused, all that remained was for George Orwell to sum up:

Now that the brief visit of the Dynamo team has come to an end it is possible to say publicly what many thinking people were saying privately before the Dynamos ever arrived. That is, that sport is an unfailing cause of ill-will, and that if such a visit had any effect at all on Anglo-Soviet relations, it could only be to make them slightly worse than before.

Anglo-Soviet relations did indeed deteriorate soon after the match, although one suspects that it probably wasn’t Arsenal’s fault.