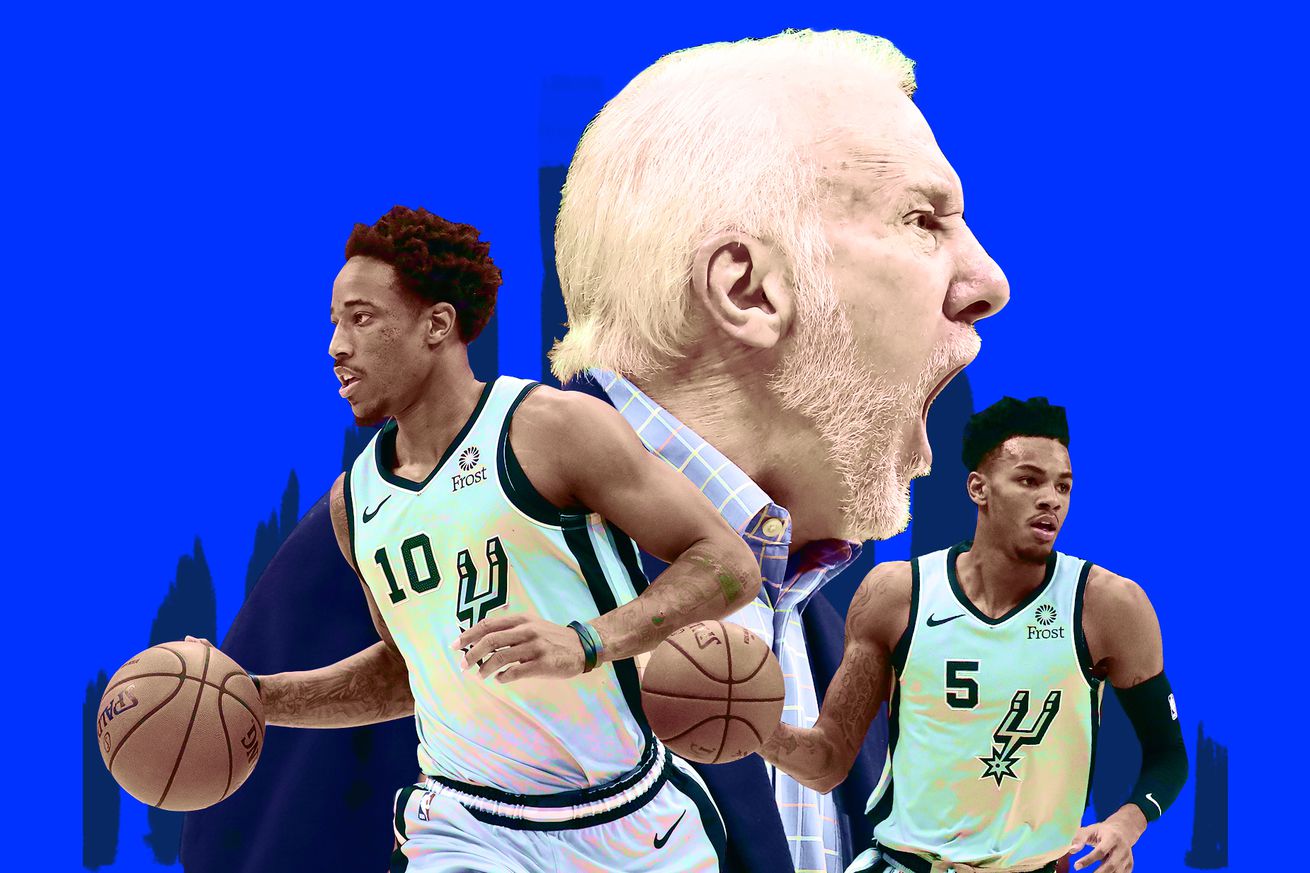 Dejounte Murray’s reintegration is throwing off the Spurs’ delicate balance.

With just under six minutes left to go in the second quarter of a home game against the kind of lottery-bound group of neophytes the Spurs always seem to beat, Dejounte Murray snatched a defensive rebound off a missed Jaren Jackson Jr. floater. As he soared through the lane, Murray spun his body around, ready to zip the 94 feet up the floor that was required.

Ball secured, he took off in a flash, sprinting at the four Grizzlies in position to stop him. As he reached Memphis’ three-point line, he crossed right-to-left, straight into the waiting arms of the Grizzlies’ Jae Crowder. The ball squirmed out of Murray’s hands and trickled out of bounds for a turnover.

The horn sounded, and Murray went to the bench. He had reached the end of his second team-mandated five-minute stretch of play, a protection mechanism the Spurs put in place to pace the 23-year-old future of the franchise properly as he recovers from last preseason’s ACL tear.

As Murray rushed headfirst into a situation he was too green to overcome, two Spurs trailed the play. They were on either side of Murray, running at a normal pace that just so happened to be far slower than Murray’s. One was LaMarcus Aldridge. The other was DeMar DeRozan.

It was a metaphor for the disjointed state of the NBA’s most enduring institution. As the future of the league’s model franchise galloped into the great unknown, the present trailed behind. Youthful exuberance and veteran realism together on the same court, but not rowing in the same direction.

Writing off a Gregg Popovich team is a violation of basketball’s Ten Commandments, but San Antonio’s 5-9 start is no accident and won’t be solved easily. An organization that has been the NBA’s melting pot suddenly finds itself stuck between two on-court styles and timelines that increasingly don’t align.

Murray’s reintegration is at the center of this conflict, through little fault of his own or the organization’s. His ACL tear last preseason was a devastating blow because it altered the seamless transition of power that has defined the Spurs for 30 years. San Antonio adapted and returned to the playoffs in his absence, but those same players, many of whom are veterans used to their ways, have struggled to readjust to his return. Placing Murray on a minutes limit in the early going, while smart and admirable for the long-term, has only compounded that short-term challenge.

Broadly, the Spurs play the same way they did last season. For all the concern-trolling about their retrograde offensive shot profile, the Spurs are still fifth in the NBA in points scored per 100 possessions. But their shotmaking on said attempts has slipped from obscene to merely good, and their shaky defense has fallen off even more despite welcoming Murray’s long arms back into the lineup. They relied on a delicate balance to thrive while outwardly defying modern NBA norms. Murray’s return, while essential and exciting for the long run, has thrown it off.

It’s worth repeating that Murray isn’t doing anything wrong individually. He’s at par relative to reasonable expectations for a young point guard who tore his ACL 13 months ago. As SB Nation’s Michael Pina noted, he’s nudged San Antonio into the league’s speed revolution, and his long arms create plenty of breathtaking quick-strike sequences that should excite Spurs fans for years to come.

But those positives have come with negative externalities that stem from his weaknesses and inexperience. Murray’s lack of three-point range is damaging enough when he doesn’t have the ball, but he’s not helpful (yet) in a half-court setting even when he has it. He’s shooting 35 percent on non-restricted area two-pointers and less than 53 percent on layups. He lacks the strength to finish through contact and the game experience to compensate.

Murray is a a next-level passer, but his handle is loose and his timing is out of sync with teammates. He gives the ball up before teammates are ready, leading to turnovers like this.

He’ll improve in time, but the Spurs’ present is suffering while he works out the kinks. Though the Spurs are running more, their half-court offense has sunk nearly six points per 100 possessions this year, which is the difference between fourth-best and 12th-best. When Aldridge and DeRozan, San Antonio’s two stars, play together with Murray, the Spurs score less than 104 points per 100 possessions, according to Cleaning the Glass. When Murray sits out, that number jumps to nearly 117 points per 100 possessions. The sample is small enough that the difference should shrink over time, but it’s hardly surprising that Murray’s offensive woes compound DeRozan and Aldridge’s aversion to taking three-pointers.

Weirdly, San Antonio’s defense, which thrived with Murray two years ago, has allowed 2.3 fewer points fewer with him off the court than on this year. In watching the film, Murray is still his spindly self on that end, so this isn’t directly on him. But in an attempt to compensate for Murray’s offensive woes, Popovich has stapled him to Bryn Forbes, San Antonio’s best shooter who is also a sieve on the other end. Seventy-seven percent of Murray’s minutes this year have been with Forbes alongside, and that means more time for opponents to attack Forbes on defense.

This has a further ripple effect on White, the former Division II guard who parlayed a breakout 2018-19 season into a Team USA appearance. Last season, White was the glue that connected the Spurs’ roster. He provided a necessary dose of playmaking juice, but also faded appropriately into the background to space the floor and took on tough defensive assignments. Ultimately, he allowed DeRozan and Aldridge to be themselves, flaws and all. (DeRozan in particular needed White: the Spurs posted a -1.7 net rating when DeRozan played without White and a +2.9 rating when the two shared the court.)

Unfortunately, Murray’s return (and corresponding minutes limit) has split San Antonio’s connective tissue. White has been relegated to backup point guard duty, teaming with the ageless Patty Mills to quarterback bench units that routinely make up the deficits the starters hand them. Murray and White is a terrific starting tandem on paper, but they’ve only played seven non-garbage time possessions together all season, according to Cleaning the Glass. You read that right. Seven total possessions … all season.

In fairness to Popovich, it’s hard to pair them when Murray is only allowed to play five-minute increments during his injury recovery. Still, the coaching legend has to find a way to get his two young guards out there together for more than seven possessions this season. Maybe that’ll happen once Murray is free to play for as long as necessary. Maybe their on-court union is the way to marry the competing versions of the Spurs: the one reintegrating Murray, and the one that succeeded against the odds last year.

But if not, the Spurs are on course to lose a year in the lottery while they sort out the unavoidable transition between one era and the next. Every franchise goes through these transitional seasons, often through no fault of their own. Untimely injuries, institutional decay, and broken succession plans dot the NBA landscape every season. There’s no shame in having a down year.

Somehow, the Spurs have avoided this fate for two decades. But life comes at you fast, even for those who defy it.

Before the season, I listed the 100 most interesting basketball-specific questions of the season. Each week, we’ll see if we have enough information to answer one of them.

QUESTION 37: What can Bradley Beal do for an encore?

I’ll be honest: I thought last year was the high-water mark for Bradley Beal. Having watched every single minute of his pro career due to my Wizards fandom, it just felt like he had colonized every reasonable plot of land in his game. His off-the-dribble shooting and playmaking had come so far since the early days of his sampling period, and I wasn’t sure where else it could reasonably go.

Turns out, I was wrong. Amid a stripped-down roster and no expectations, Beal has turned himself into the kind of superstar any team can build around. He’s not the only reason the Wizards somehow have a top-five offense, but he’s by far the biggest.

The best part: hot shooting is not causing Beal’s statistical jump. Instead, it’s his power driving to the basket, a skill that seemed inconceivable when he entered the league. It’s hard to believe this is the same player who once needed John Wall’s brilliant vision or a maze of pindown screens to get open. Defenders simply bounce off him when he’s attacking the basket these days.

His shooting percentages around the rim are about the same as before, but he’s converting more effectively on floater-range shots while drawing nearly two and a half more fouls per game as he did last season. His first step is now lightning-quick, allowing him to get the angle on defenders in isolations, pick-and-roll situations, and those clever dribble handoff he executed with promising Lakers cast-offs Thomas Bryant and Mo Wagner.

Once he sneaks inside of defenders, he’s too strong for them to dislodge. He’s become an expert at sliding around and through shot-blockers: only seven of his 84 shots inside of eight feet have been sent back at him this season. Watching him zoom to the hoop and jump into taller defenders harkens back to the glory days of Gilbert Arenas, himself a master at this tactic.

This explains how his production has jumped despite shooting only 33 percent on three-pointers thus far. You’d expect his shot to come around, and it has in the last week. Once it does — and once he begins to incorporate Damian Lillard-esque deep off-the-dribble threes into his game — he should really become impossible to stop. That’s inspiring news for a Wizards team that convinced him to re-sign for the long haul and perhaps dispiriting for other contenders who hoped he might become available via trade.

CLOSEOUT OF THE WEEK

Three-point shooting is essential, yet there’s no good stat that credits defenders for the essential act of preventing a three-pointer from being taken. We must reward these efforts.

Great closeouts don’t happen in isolation. They require teammates rotating off their own men to stop the threat, then repeating the same process to quench the next threat. O.G. Anunoby got credit for the steal on this play, but he couldn’t have done it without the sustained, yet controlled efforts of his teammates.

REBOUND JOUST OF THE WEEK

Last year, I wrote about the rising trend of teammates fighting each other for defensive rebounds. These moments usually end harmlessly, but occasionally, they can cost a team. Here’s to over-aggression!

Nothing went right during the Hawks’ weekend in Los Angeles.

Tactically Naive: A football player speared a fan in the testicles with a corner flag