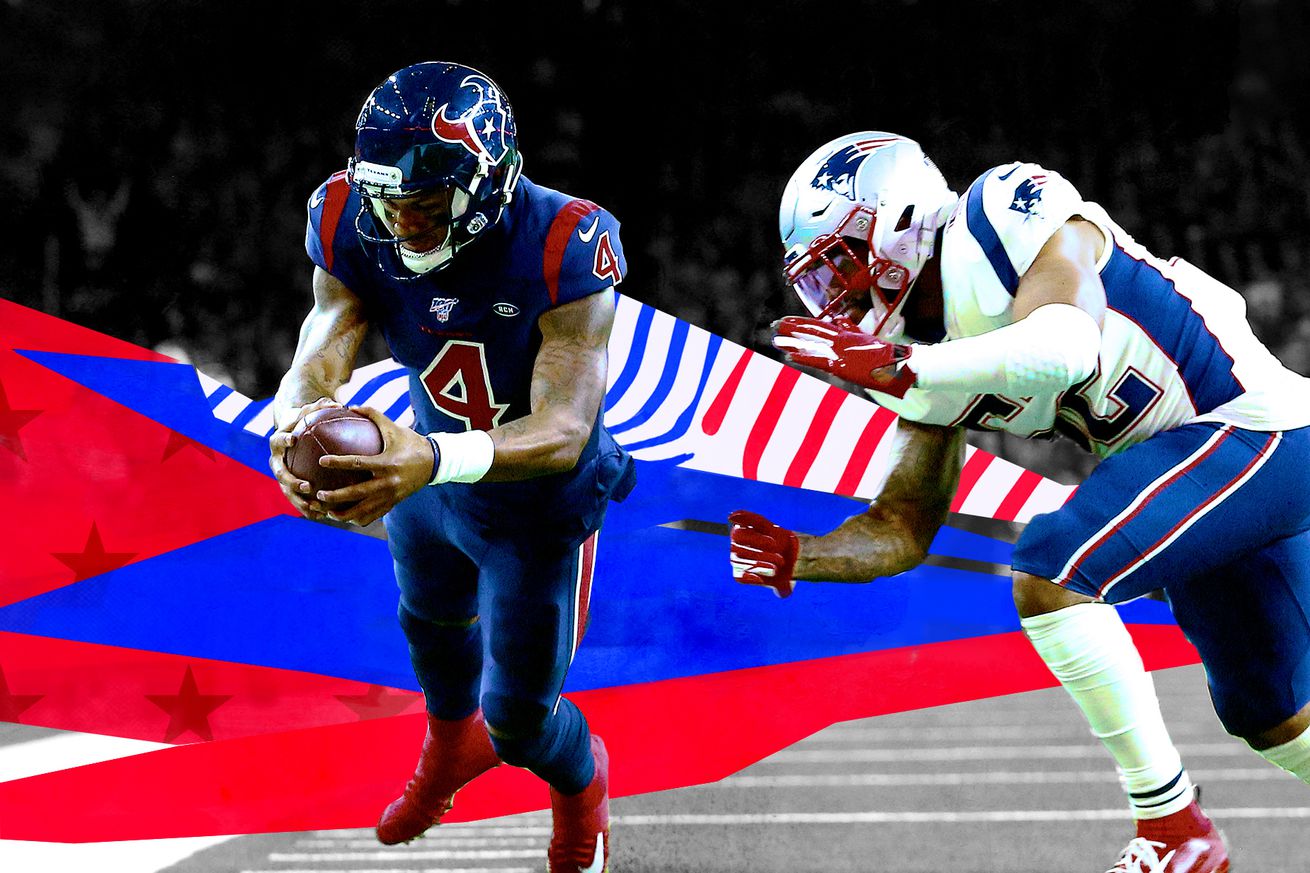 Deshaun Watson scored four total touchdowns to lead the Texans to a win over the Patriots in Week 13.

Deshaun Watson saw the Bears do it. Then his Texans tweaked it to roast the Patriots.

The Texans needed a big play to put away the Patriots on Sunday night. They got it from a page in the playbook co-written by their biggest star.

Houston hadn’t beaten New England in nearly a full decade when its offense lined up for a first-and-goal snap from the 6-yard line in the fourth quarter. A touchdown here would give the team a three-possession lead and effectively end the game. More importantly, a fourth touchdown would put a massive dent in the reputation of the Patriots’ elite defense.

However, none of the Texans’ prior three scores had come from inside the 10-yard line. Cracking the Pats’ unit, compressed by the end zone in a desperate situation, would take some creative thinking.

With DeAndre Carter in motion running to his left, Watson handed the ball off to Johnson, who followed Carter’s lead … briefly. Johnson handed the ball to Hopkins, who ran back to the right with Watson flanking him. When New England’s linebackers began to crash down on the All-Pro wideout, he pitched the ball to his quarterback, who dove the final few yards to the corner of the end zone.

The reverse-option pitch to the quarterback wasn’t something the Patriots had planned for; Houston had never run it before. But while head coach Bill O’Brien joked the play looked like it came straight from a pickup game after practice, it was actually something he’d been working on, waiting for the right time to debut.

“I think they drew that one up in the dirt over the bye week, and they brought it in and had it on a piece of notebook paper and handed it to me,” O’Brien facetiously told reporters afterward.

“Nah, we’ve been working on that for a while. It was all about the timing. Where we could get the ball so we could run a play like that. And the timing was right.”

There was some truth to his original joke, though. According to Watson, he brought the idea of the modified option to offensive coordinator Tim Kelly after watching some game tape.

Watson drew inspiration for the play from a 2017 Bears game

Despite not playing either Minnesota or Chicago this season, Watson and backup AJ McCarron were poring over old NFL games when they came across a Vikings-Bears showdown from more than two years ago. In it, then-rookie Mitchell Trubisky walked untouched into the end zone for a two-point conversion after taking a pitch from tight end Zach Miller:

Watson and McCarron showed Kelly the Chicago subterfuge, and then the Texans got to work tweaking it. They changed their formation and sent Carter in motion to sell the idea of a run to the left. Then they drilled it to perfection in practice.

“We kept working on it and we knew it was the perfect time where once we get inside that 5 it was going to come,” said Watson. “So it was good.”

The Texans leaned in to the explosive and irreplaceable talent that makes them so difficult to plan against. The question now is whether this will indicate a changing of the guard when it comes to O’Brien’s playcalling or whether this sudden outburst of unexpected trickery will be an outlier in Houston’s 2019.

The option TD was uncharacteristic for the Texans, which helped it work

O’Brien is not much for trick plays. Since 2014, only 31 of his 2,726 runs (1.1 percent) have been handed off or pitched to players who aren’t running backs or QBs. Just five of his team’s 3,106 passes (0.16 percent) have been thrown by non-quarterbacks. The last time Houston opted to switch things up in its passing game it ended disastrously:

There’s an argument the Texans don’t need to change things up much thanks to Watson’s ability to sling the ball. The dual-threat quarterback is proficient from the pocket (a 54 percent completion rate on throws of 10+ yards). He’s also got one of the league’s top wideouts at his ready in Hopkins and a devastating deep threat next to him in Will Fuller.

That’s a strong group in a traditional offense, but Sunday’s outside-the-box thinking showed what the Texans can do when they’re allowed to move the ball beyond their traditional offensive roles. Watson has run for nearly six yards per carry and is tied for the team lead in rushing touchdowns under O’Brien thanks to his 12 scores.

Kenny Stills, traded to the Texans along with Lamery Tunsil this preseason, threw a reverse-pitch touchdown pass to Ryan Tannehill that looked similar to Sunday’s option in Week 17 last season:

Now imagine a play like that, only thrown to Watson. Or Hopkins. Or Johnson. The Texans have a ton of versatile athletes they can swap out in order to keep defenses from ever getting truly comfortable. Week 13’s touchdown pitch could just be the beginning.

This doesn’t mean Houston should rely on an all-gimmick offense. Throwing Watson into the line of fire any more than he already he behind the Texans’ shaky-but-improving offensive line is courting trouble.

Even so, the Texans have been a good but unthreatening team for most of their existence under O’Brien, despite having Watson to carve up opposing defenses. Houston has perpetually lacked the extra gear needed to break through the Divisional Round of the playoffs. That’s where the Texans have been ousted by the Patriots in two of their last four postseason appearances — the same team O’Brien iced Sunday with a little creative playcalling for his first-ever win against the coach he worked for from 2007-2011.

Week 13 showed the Texans are open to embracing new ideas, even if they’re lovingly lifted from a 2017 Bears team that won five games. If that lasts, it could be the paradigm shift that raises the franchise’s ceiling from “good” to “great.” If it doesn’t, well, the Texans still have Watson and Hopkins available to torch defenses the old-fashioned way.