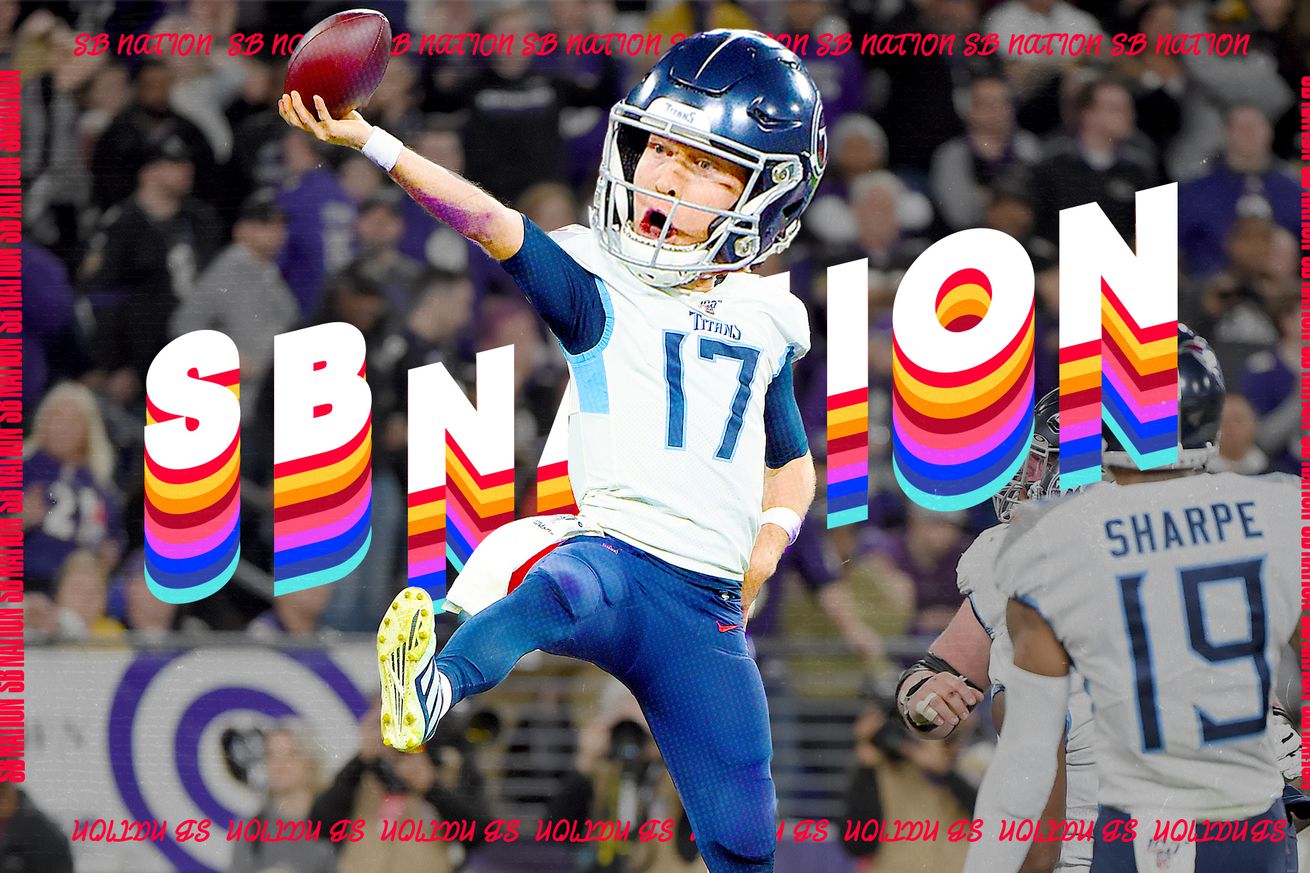 The Titans’ surge began when they switched to Ryan Tannehill at quarterback.

Tennessee’s been a low-key must-watch team since October.

The Titans don’t really make sense as a conference finalist in 2020. Their starting quarterback has thrown for 160 total yards in two playoff wins. Only one player on the roster had more than 43 catches during the regular season. Their defense is anything but dominant, ranking smack-dab in the middle of most efficiency ratings and finishing 21st in yards allowed this fall.

But buried underneath two of the NFL’s most pass-heavy offenses in the conference championship games is Tennessee, capable of grinding the bones of your favorite team into dust. The Titans went from early-season afterthought to the doorstep of an NFL title opportunity thanks to Ryan Tannehill (a quarterback the Dolphins didn’t want), the broad shoulders of tailback Derrick Henry, and a roster with 51 other guys ready to step up and make a play — and then roast their opponent afterward.

Along the way, they’ve beaten the reigning Super Bowl champion, this season’s Super Bowl favorite, and already have a win against the AFC’s preseason Super Bowl favorites — a Chiefs team they’ll face Sunday in the AFC Championship Game. Tennessee is one win from its first Super Bowl appearance since Kevin Dyson came up one yard short of the end zone in 2000.

The Titans’ presence as one of the NFL’s last teams standing may have come as underdogs, but it’s not surprising. They have been doing this since October.

The Titans didn’t look like a playoff team early in 2019. They looked like a speed bump on a better team’s road to the Super Bowl.

Mike Vrabel’s offense sputtered through a four-game stretch in which Tennessee went 1-3 and scored seven points or fewer in all three losses. The nadir was a 16-0 smothering at the hands of the Broncos — a valley that also proved the foundation from which the team’s AFC title game run was built.

That lack of firepower necessitated a change at quarterback. Marcus Mariota was out. Ryan Tannehill, rescued from the Dolphins for a swap of Day 3 picks (and with a heavily restructured contract) was in. The difference the new passer made was undeniable — and it wasn’t just through the air. Over the next 11 weeks, Tennessee would turn a 2-4 start into a 9-7 record and a wild card berth.

The Titans had averaged just 290.5 yards per game of total offense through Week 6 (27th-best in the NFL), Tannehill’s presence pushed that number to 406.2 yards per contest (third-best, behind only the Cowboys and Ravens). Under Mariota, the offense had failed to crack 200 passing yards three times in six games to start the season, all of which were losses. Tannehill‘s offense did the same just three times in Tennessee’s final 10 games. Each was a Titan victory.

Around this time, Tennessee became fun as hell

A once-unwatchable team had become one of the league’s most exciting, even if the Titans’ ascendance wasn’t yet obvious to the NFL world at large. Tannehill’s leveled-up intermediate passing game led to a win in his first start against the Chargers and began A.J. Brown’s transformation into a potential offensive rookie of the year winner. Three weeks later, Henry stamped his arrival across the league’s forehead with a 188-yard performance in a comeback win over the Chiefs.

There was more to this team than just a few wins and an unlikely turnaround. Tennessee was getting contributions from everyone across the roster.

In Week 12, the Titans gave a 320-pound lineman a touchdown catch and were rewarded for their valiance with a beautiful shotgunning celebration:

Open up the cooler for the boys! #JAXvsTEN#BudLightCelly | @budlight pic.twitter.com/5DmJtbFq0s

Brown, now looking like a legit Offensive Rookie of the Year frontrunner, became an elite deep threat. He’d have nine plays of 40+ yards in 16 games, including a 91-yard touchdown catch that helped scatter the ashes of the Raiders’ playoff hopes to the wind.

RYAN TANNEHILL THROWS FOR 391 YARDS AND THREE TUDDYS, KING HENRY HAS ONE HAMSTRING AND STILL SCORES TWICE, AJ BROWN DOES AJ BROWN THINGS, THE DEFENSE SHUTS OUT THE RAIDERS IN THE SECOND HALF AND THE TENNESEE TITANS ARE THE HOTTEST TEAM IN THE LEAGUE pic.twitter.com/tCBht6WLKo

By the start of December, Tannehill and Henry had put the Titans right in the thick of the AFC playoff race by smashing the Colts and Jaguars into pieces. He’d turned young players like Jonnu Smith and Kalif Raymond into trusted playmakers and gave defenses few easy choices in coverage.

Even when Tannehill struggled, he found ways to make up for it — like when he trucked defensive lineman Maurice Hurst after an interception, then led Tennessee to a 42-21 win.

Tannehill was outweighed by at least 84 pounds and still threw every ounce of his weight into that hit. If the rest of the roster wasn’t behind him before then, they certainly were after seeing how much he’d sacrifice for his team.

That effort bled into the defense, where 15 different players had sacks and 18 batted down passes. It bled into special teams, where a blocked field goal at the end of regulation preserved a 35-32 win over the very team Tennessee will face in the AFC Championship.

the Titans get the FG block (!), beat the Chiefs (!!), and now the Raiders are a half-game away from the top of the AFC West (!!!) pic.twitter.com/cpuUpcgLl9

That run built confidence for the Titans’ playoff success

There was a certain swagger that came with this kind of under-the-radar excellence.

Tennessee was playing for a coach willing to swap his most male piece of anatomy for another Super Bowl ring. Henry had gone from the league’s 12th-leading rusher during the Titans’ 2-4 start to the 2019 yardage king, so he got a crown to go with it. After beating the Patriots in Gillette Stadium — just New England’s first home playoff loss since 2013 — the team celebrated in the locker room like they knew the outcome before the game had even been played.

That game came to a finish after Logan Ryan potentially ended Tom Brady’s Patriots career on a pick-six. Brett Kern made sure he didn’t have to run very far to get there with an absolute banger of a punt moments before.

_charlieluke_: Brett Kern pins the Patriots at their own 1 yard line with a perfect punt CBS CBS 2 News at 11 https://t.co/4qdnqD0XHo pic.twitter.com/jvNQJVRa0J

That kind of confidence is how, one week later, you get Tajae Sharpe poking fun at Pro Bowl running back Mark Ingram moments after escorting the Ravens out of the playoffs.

A special introduction for @KingHenry_2 — by @Show19ine of @Titans pic.twitter.com/Ygb5J3aqnX

Now they’ve got to take that swagger to Kansas City — and then, potentially, to Miami for Super Bowl 54.

In the last three months, Tannehill has played like an MVP, Henry has evolved into the most dangerous tailback in the NFL, and a group of overlooked receivers and tight ends has given Tennessee the leverage to grind opponents into dust or slice them in half with big plays downfield. The Titans’ defense has gotten in on the action as well. Despite getting outgained in each of their playoff games, that unit held the Patriots and Ravens — the latter the NFL’s top offense — to just 25 total points this postseason.

The Titans’ surge was all exceptionally exciting and, honestly, fairly unexpected. It set a stage where Tannehill and Henry could rely on a handful of overlooked teammates to help pave their road to the AFC title game. Tennessee wasn’t just winning games after demoting Mariota — it also became one of the most exciting teams on television each Sunday.

Of course, being watchable and fun doesn’t always equal successful. The Titans punched above their expected weight class to end the Patriots’ and Ravens’ seasons. They’ll be underdogs for a third straight week when they take on the Chiefs in Kansas City.

Given 2019’s turnaround, that’s probably just how they want it.