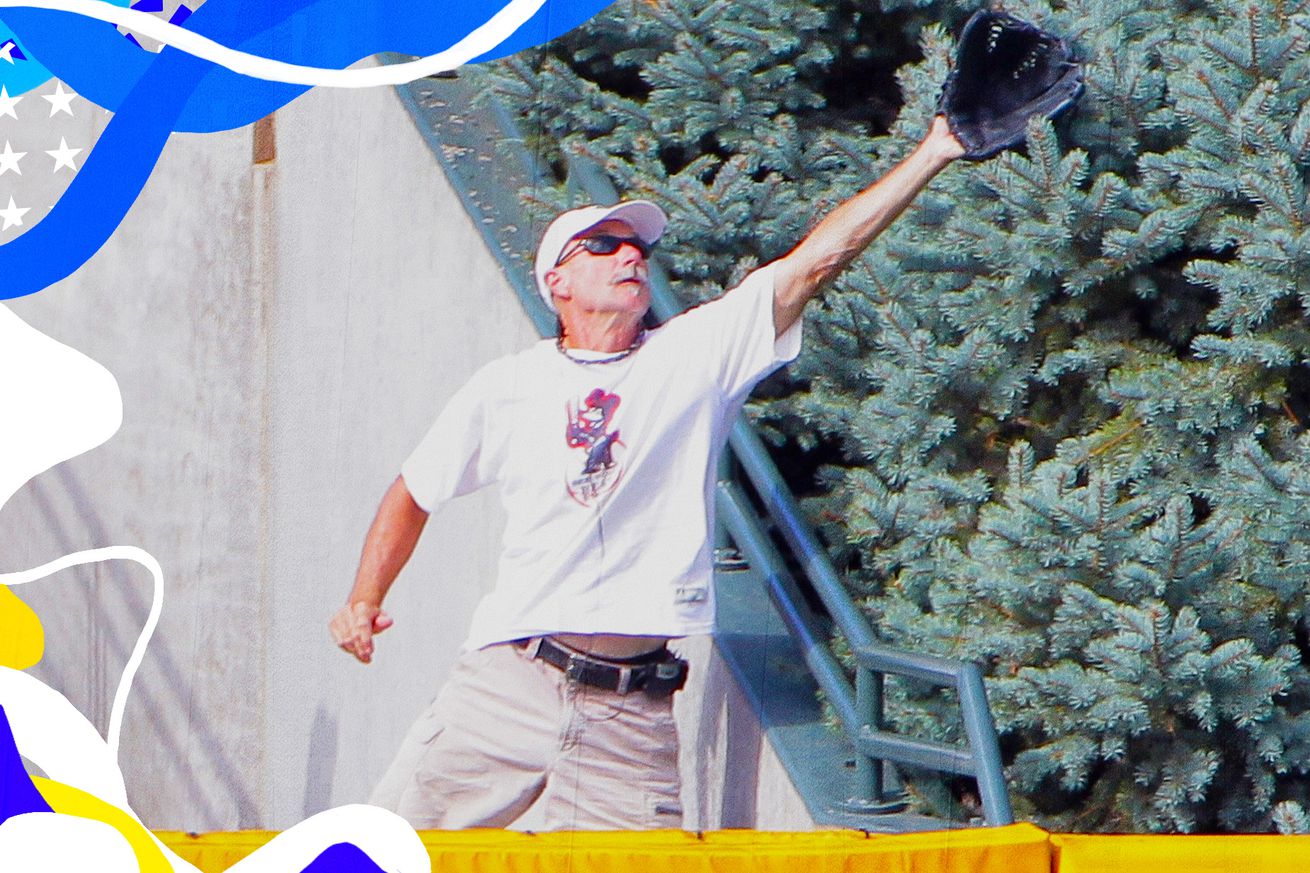 There is something much sadder about a grown man or woman reaching out for a hard-hit foul ball and looking like a dingus when it clanks off his or her hand.

This brings up the most important unwritten question of them all: Should adults bring a baseball mitt to baseball games?

Allow me to begin with a disclosure of my bias. I wrote a version of this article eight years ago in which I was completely unaware that there was even a controversy. This is almost certainly because I grew up listening to Giants games that were announced by Mike Krukow and Duane Kuiper, two former players who are absolute zealots about bringing your mitt to a game. They will constantly replay fans making a sweet catch and add their catchphrase (pun ABSOLUTELY intended) after every one: “That’s why you bring your glove.”

I’ve heard “that’s why you bring your glove” since I was, oh, 10 or 11, so I’m indoctrinated. It feels like necessary full disclosure to bring that up.

On the other hand, they played Major League Baseball, and they don’t have a problem with adults wearing gloves to a baseball game. What athletic accomplishments do you have, nerd?

SORRY, sorry — this is supposed to be a safe space where we can discuss this important topic without judgment. It’s probably best to go over a simple list of pros and cons.

Yeah, there’s no getting around this. When you wear a mitt at a baseball game, you’re like someone who wears an inner tube around their waist in case the great flood happens. While they’re prepared in case the ice caps melt and wash everyone else away, they’ll still look like they were drawn by Gary Larson. The odds are against you ever needing to use that mitt, so you sit there with your old, decaying, smelly mitt — what is that signature, Al Oliver, man, how old are you? — eating nachos awkwardly as they balance precariously on your lap, just waiting to get into the game.

It’s a bad look, and this isn’t up for debate.

The question is if this is the only piece of evidence that matters to you. I’d mock the idea that you should be concerned with your appearance, except I own a “I LOVE KENT TEKULVE” hat that I won’t wear because it fits funny and doesn’t sit right on my head. If you feel like a dork with a mitt at a game, well, that’s probably because you look like a dork. So I get it.

On the other hand …

PRO: You’ll look dumber when a ball clanks off your bare hands

Asking someone to catch a baseball with their bare hands isn’t fair. There’s a reason why we fete Kevin Mitchell to this day: He did something humans aren’t supposed to do. You’re not expected to kick a free throw if a basketball goes into the stands. You’re not expected to catch a football between your knees if an errant field-goal attempt misses the net. So why are we expecting fans to catch a baseball with their bare hand?

I’ve caught two foul balls in my life, both with a mitt. I’m not entirely sure what I would have done if I weren’t wearing a mitt. Run away? That would be the smart play, but I’m almost certain that I would put my hands up like a fool, risking my livelihood.

ME: A.J. Pierzynski looks like a living Where Are They Now? feature about a former child actor who always made your skin crawl before he disappeared off the face of the earth.

VOICE-RECOGNITION SOFTWARE: A jay pier sin skis looks like a living warehouse feature about a child act orb who all ways made your skin crawl before he disappeared off the face of the urn.

ME: Fowlb isn’t even a word.

VOICE-RECOGNITION SOFTWARE: It gets so lonely in here. This is all I have.

Chilling! And yet I would have done it, because when you have a chance to injure yourself significantly to get a $20 orb of cork and horsehide, you have to take it. In the Neanderthal times, you couldn’t get a mate unless you caught the orb in a very public ritual. This is why our brains are wired to stick our hands out for the orb. Go, retrieve the orb.

And if you fail, you’re ruined forever, and you will spend the rest of your life with mangled fingers and a recurring nightmare that you can’t find your mitt. Take the smaller hit to your coolness and just look like a weenie.

Nobody’s really paying attention to you, you know. You’re not actually the star of a prestige TV show about your life. I’ve checked on this.

CON: But, oh God, nothing is worse than an adult muffing the catch when they’re actually wearing a mitt

DO NOT DO THIS.

Then, friend, people are paying attention to you. The Curb Your Enthusiasm theme plays, and everyone is pointing or laughing. You will be on television. Possibly several times. If you have a perfect-enough hangdog expression, you might end up as a GIF that resurfaces every couple months. If it hits you in the right spot, you might be on a national highlights show.

Someone from high school will see you take a baseball off the beans, and your instinct will be to belatedly protect your beans with the mitt that most certainly did not protect your beans because of your assorted failures. There you’ll be, covering yourself with a useless mitt as the ball goes into the hands of someone who was just sitting there like a normal adult, without a mitt.

This is the nuclear option, and you will need to move to Zanzibar if this happens. Don’t bother selling the house; they’ll mail you a check later.

The first time I caught a foul ball while wearing a mitt, I realized, “Say, I haven’t caught a baseball with a mitt in 10 years” as the ball appeared to grow bigger and bigger during its descent. The result was that I was suddenly hyper-aware of the possibility of the ball hitting me in the face, which made me look down at my feet as the ball approached. I stuck the glove up and made a no-look catch, which led to Mike Krukow saying:

“Heh, heh, heh, a guy in the stands just made a catch, and I don’t know how he did it. Because he was looking at his FEET when the ball went into his glove.”

That’s how close I was to getting wrecked on live TV. In retrospect, I should have calmly sidestepped out of the way and abdicated my position.

This means we have some universal truths to discuss about adults bringing a mitt to a baseball game.

But it’s mostly OK, and this is now settled for all time.