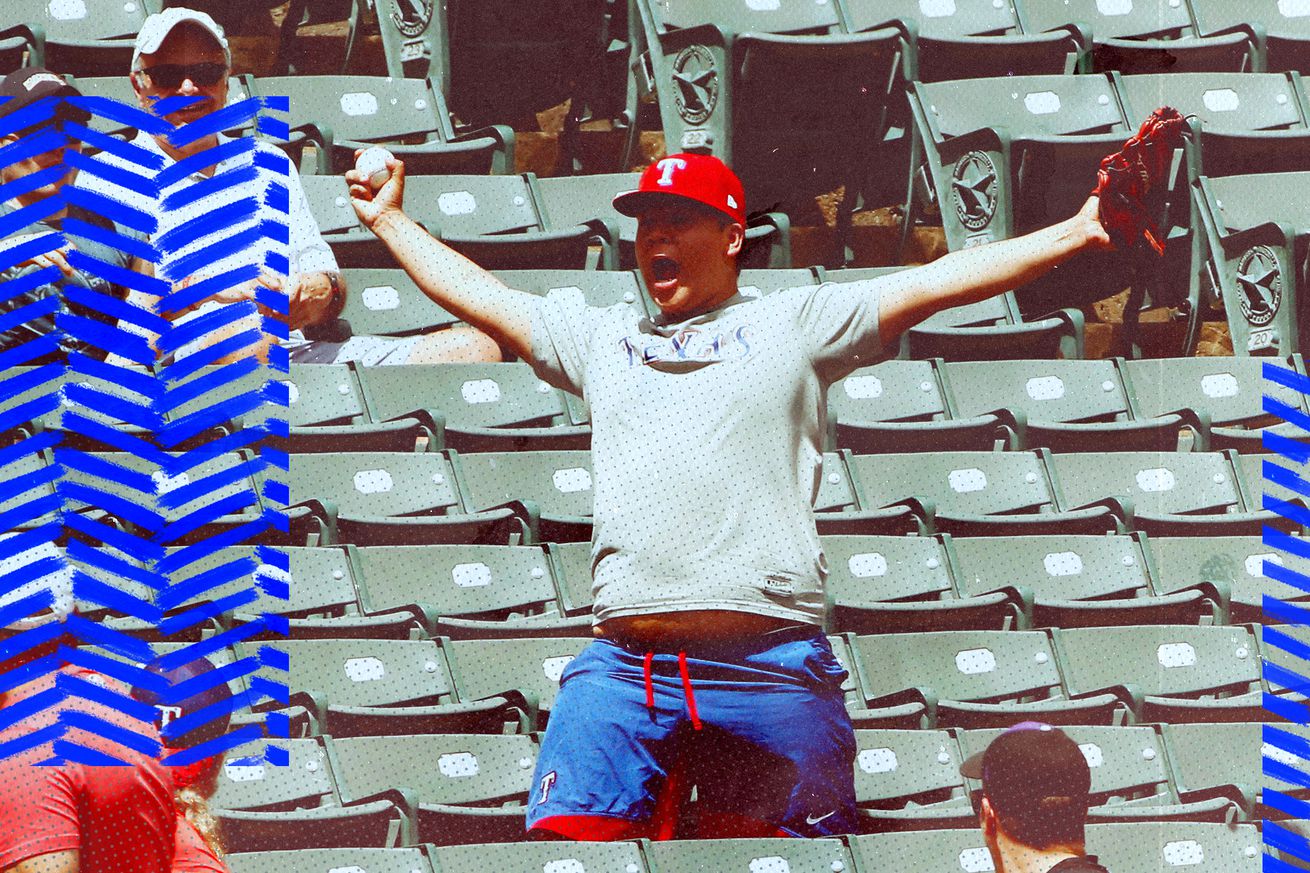 So you’ve done it. You’ve caught a foul ball, and your entire section is applauding your efforts. Maybe you turn around to acknowledge them, ball aloft. Maybe you fist pump and high-five the people around you. Maybe you’re one of those dorks who sits down and doesn’t even look at the ball, like you’re Dylan McKay. Well, you’ll never be Dylan McKay. Crack a smile, dork.

The unwritten fan rules have changed over the years, but I think we’ve reached a consensus: Give it to a kid. There’s something unseemly about an adult spinning a baseball around in his or her hands while an 8-year-old lurks in the shadows, thinking about the schoolyard tales that could have been theirs to share. Instead, a grown man or woman is going to take that ball and maybe — maybe — put it on top of a dresser for a month.

We’ve all agreed on these unwritten rules, and they inform how we watch baseball games, both live and on TV.

But hold on for a second.

That is too simple of an unwritten rule. There are shades of grey. There are levels. There is nuance to dissect, so dissect we must. What are the deeper unwritten rules of giving a foul ball to a young stranger at the ballpark?

Rule #1: If the ball is tossed by a player or team employee, you give it away

This is not negotiable. Got a kid at home? Buy a baseball and lie to that kid. You didn’t work for this one, and you didn’t put yourself in harm’s way. Plus, you run an extremely high chance of screwing up and not realizing that the player was actually trying to get the ball to a kid in the stands. Maybe you jumped in front of that kid, and now you’re on TV, about to go viral.

A ball tossed gently into the stands belongs to a kid. If you have a kid, he or she absolutely will not care about the story of how you were gently tossed a baseball. Just buy a baseball. No one cares about an underhanded baseball … except for a kid who is right there, hoping for a ball at that very moment.

Rule #2: If you have a kid at home, you can keep a ball that you’ve caught

However, you must declare this loudly and often!

MY CHILD, BERNARD, IS VIGOROUSLY INTERESTED IN BASEBALL, AND HE WILL LOVE THIS BASEBALL.

You have a phone? FaceTime your kid. Show him or her the baseball. Again, make a big deal out of it and absolve yourself instantly.

There is a grey area, of course, because there always is. What about a child-to-be? I’ve written about this before. A dad sitting next to me tried to lay a guilt trip on me because I was keeping the ball, but I was actually keeping it for my unborn daughter so that I could tell her stories. And I did.

I play it up as if the ball is a meteor hurtling towards Earth, waving my arms frantically. (My daughter) giggles. I tell her that her mom, seven months pregnant, leapt over rows and rows of seats, desperate to get out of the way. She’ll giggle more and ask me what she was doing inside her mom’s belly. I’ll mix it up at this point, sometimes telling her that she was sleeping, other times telling her that she was desperately crawling away too, doing loops inside the womb like it was a hamster ball. She likes pantomiming that last part as I’m telling the story.

Then she’ll go away, completely satisfied. The energy that the foul ball brought to the section in the minutes directly after didn’t dissipate into the atmosphere; there are still trace amounts of it inside the ball, and my daughter is the only person in the world who knows how to access it.

Then the second daughter came around and would chew on the ball and I’d say, “Eh, probably won’t kill her” but that’s a parenting column for another time.

But, yes, unborn children get baseballs too.

Rule #3: If you caught the thing with your bare hands, you get to keep it

You didn’t follow the advice from the gloves at baseball games installment of the unwritten rules, and that’s fine. Now your hands sting something awful, but the entire section — if not television audience — thinks you are an unimpeachable badass with Jackie Chan-like reflexes.

Yeah, that’s yours. A kid can have it if he or she agrees to let you wing it at them, full speed. But if they agree to that, be careful, it’s probably a trap. Kids are litigious little creeps these days, and they’re always looking for an angle.

Anyway, bare hands mean you can keep the ball. This isn’t up for debate.

Rule #4: If the foul ball was rattling around on the ground, give it to a danged kid

You know the kind of foul ball that I’m talking about. It clanks off the upper deck, bounces a couple of times, and then rolls around under some seats, which leads to a hilariously oafish Easter egg hunt.

Your kid will not care about this story. Nobody cares about this story. A baseball rolled to you, and you picked it up. This is not a triumphant scene out of 2001: A Space Odyssey in which humanity is pushed forward. Do not raise your arms aloft, turn around to soak in your section’s applause, pretend like you accomplished something amazing, and keep the baseball.

Rule #5: Look, if you want the ball, keep the ball. Other people’s kids are gross anyway.

I love my kids. Other people’s kids are covered in a weird, sticky film and they stare at you while chewing. If you’ve always wanted a foul ball and felt hosed by the random number generator of life because you never got one, just keep the stupid ball. The kid will grow up to be an awful adult, just like us, and nothing will change that, not even the brief burst of happiness that your foul ball will provide. Just keep the ball if you want, IDC.

As long as it wasn’t gently underhanded to you by a player or team employee. And as long as it wasn’t rattling around on the ground for several seconds. There are limits, so be smart out there. (And that GIF still takes my breath away years later, so, seriously, don’t do that.)