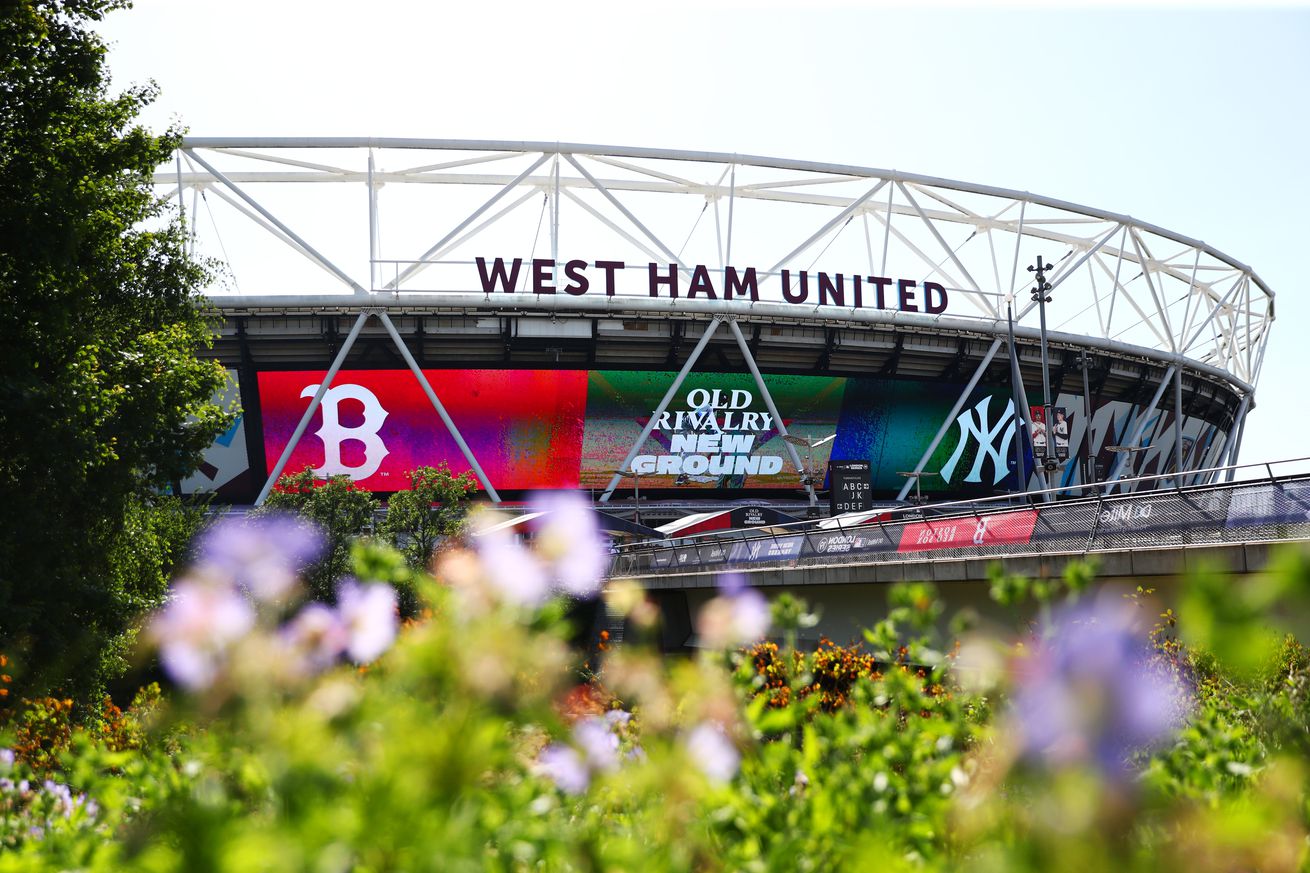 The Yankees and Red Sox went (west) HAM in London

Major League Baseball played its first ever regular season game in Europe on Saturday, with the New York Yankees and Boston Red Sox starting a two-game series in London. The first game was a wild 17-13 win for New York, so let’s take a look at the best moments and notes from baseball’s latest international delight.

The Yankees and Red Sox fled the United States for this two-game set, but still couldn’t avoid another American League counterpart, facing the royals before the game. Prince Harry and Megan Markle met with both teams before taking part in the ceremonial first pitch ceremony.

The game looked like a laugher early when the Yankees jumped all over Rick Porcello for six runs in the top of the first inning, but things got even wackier in the bottom of the frame when Boston scored six runs of their own. Neither Porcello nor Masahiro Tanaka made it out of the first inning, with two dreadful starts:

Tanaka was able to last through eight batters, while Porcello faced only seven. The dual duds were historic.

This is 3rd game in MLB history in which both starters allowed 6+ ER and didnt get out of 1st inning.

Edwin Encarnacion started at designated hitter for the Yankees, and he contributed to the offensive bacchanal with an RBI double in the first inning. But what was notable is that Encarnacion began the 2019 season with the Seattle Mariners, who opened things up with two regular season games in Tokyo. So he played this season in Asia, North America, and Europe, a true continental star.

Is Edwin Encarnacion first player in @MLB history to play a game on 3 different continents in the same season? #2019 #NorthAmerica #Asia #Europe

If so, first reported here first@PHill_bone

Meanwhile, the Rockies let the solid defender and reliable producer walk over the winter, instead handing their own $24 million guarantee over two years (plus an option year) to Daniel Murphy, who it hitting just .281/.324/.452, an 85 wRC+, and made two errors at first base on Friday night. Oops.

The stats were so outlandish in this game that the folks at Fox were all mixed up. They posted this graphic with one out in the bottom of the eighth, with the Yankees leading 17-13.

Thirty earned runs in 15⅓ innings pitched is 17.61, in case you were wondering.

Grand slams are pretty awesome, the greatest thing one can do in a single at-bat in a baseball game. Three-run home runs are cool too, almost as good, and as a general rule hitting a three-run homer tends to mean good things for the team hitting them. Michael Chavis hit two of them for the Red Sox, and they still lost. What gives?

But believe it or not, this also happened earlier this season! On May 3 in Cincinnati, Derek Dietrich popped a pair of three-run shots but saw his Reds lose 12-11 to the Giants. So Chavis has company.

In a game they once trailed by 11 runs, the Red Sox got the tying run to the plate in the eighth inning, down four runs but with the bases loaded. Marco Hernandez grounded out though to end the inning. The pitcher that got the Yankees out of their biggest jam of the game in Great Britain? Zach Britton.

Time is on their side

It’s a good thing Boston and New York were both off Thursday and Friday, and will again be off Monday for travel. Because Saturday’s game lasted four hours, 42 minutes, in a game that lasted only nine innings. It was the third-longest nine-inning game in MLB history, behind only two other Red Sox-Yankees games, in 2006 and 2007.