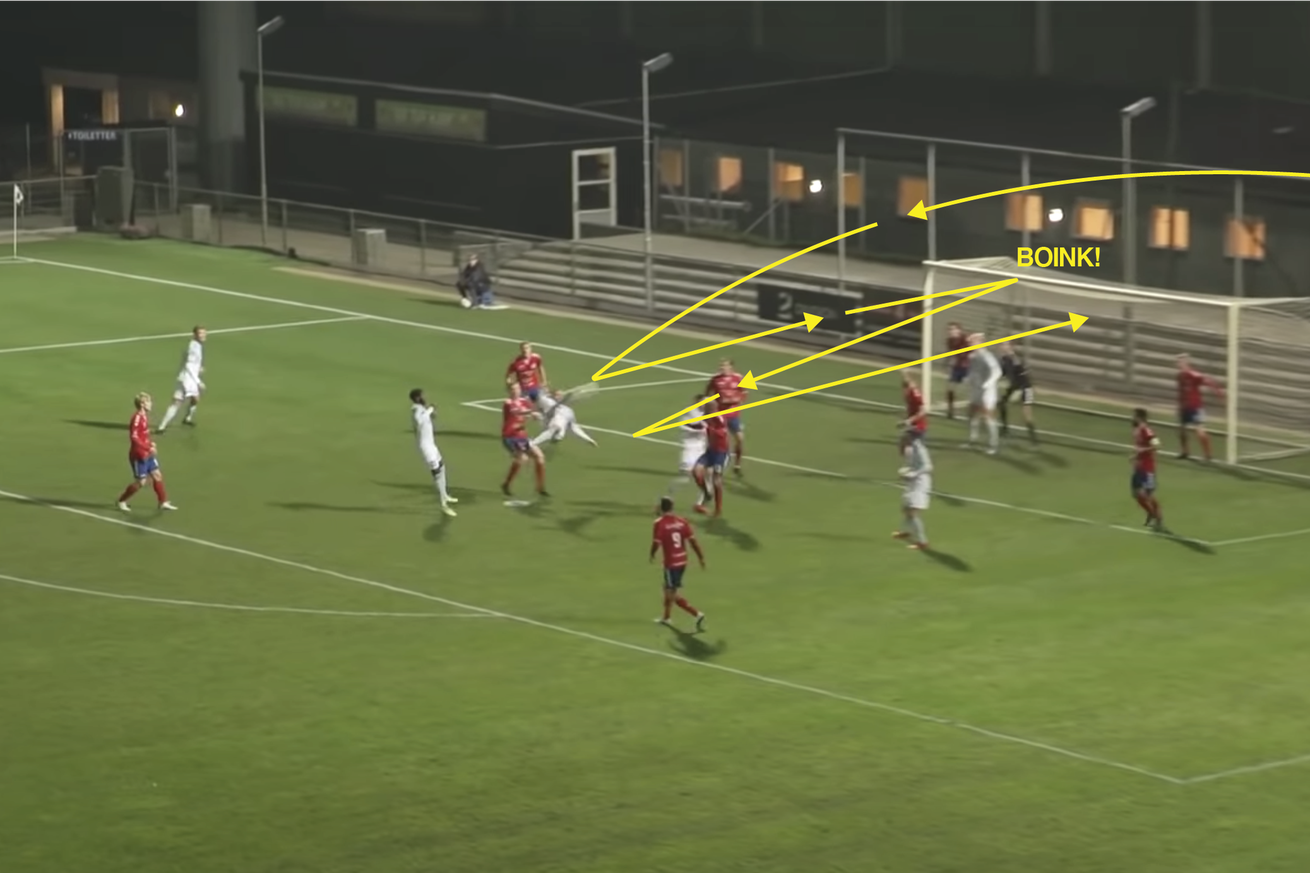 Soccer is a very old, very popular sport. It has been played professionally for almost 150 years, and is also played at a high level by millions of amateurs around the world. This means that almost every variety of goal that could be scored has been scored, and with more and more games televised these days we get to see all sort of amazing things which might have seemed impossible just a couple of decades ago.

Want a running scorpion kick from a cross? Olivier Giroud’s got you covered. A last-minute equalizer by a goalkeeper with an instant reply from the center circle? Here is something from the lower leagues in Spain. Presumably we will be getting more and more absurd goals piped into our brains in the near future, a sort of million-monkeys-writing-Hamlet vision* of the sport.

*Thanks to selective virality, we can ignore all the times the typewriter got covered in poop. Unless it got REALLY covered in poop, in which case it’s funny again.

Here is the latest absurd goal to come to my attention, a ludicrous trick shot from Lyngby BK’s Nicolai Geertsen:

If you’re unable to watch that video, it’s a beautifully-executed scissor kick volley which … hits the crossbar. But it hits the crossbar so perfectly that it falls back to Geertsen for him to hit another volley. Volley the second, mercifully, avoided the crossbar, zipping past the bewildered Slagelse goalkeeper and into the back of the net. It’s a beautiful, confounding goal, and it’s one I never expected to see.

I wonder how lucky one would have to be to pull this off. We don’t often acknowledge the role of sheer luck in professional sports. You can practice scissor kicks until your studs fall off, but you’ll still have a hard time making contact as sweetly as Geertsen did here. Then hitting the (round) ball off the (round) crossbar in such a way that it ricochets straight back to you? Landing from the scissor kick cleanly enough that you can get back up in time to hit another volley? And hitting that one sweetly from pure reflex?

There is plenty of remarkable skill in that sequence, of course. But at every stage lurks the imp of improbability, ready to throw skill overboard and thwart the entire sequence. You could give Lionel Messi a hundred attempts at this and he still probably couldn’t pull it off. And yet it happened! And it wasn’t even a Messi who did it!

Geertsen is a 29-year-old central defender who has spent most of his career moving around the lower rungs of Scandinavian football. There’s a stint with Sandnes Ulf in Norway’s second tier, a few months in Denmark’s third division with Hillerød, then a sudden jump to Lyngby in the top flight. Geertsen isn’t a household name and has never played a minute of international football. Yet here he is with one of the more mind-boggling goals in soccer history.

That’s the glory of sports, really. There are some players who can make the impossible seem like a foregone conclusion, and that’s what makes them great. But there are many others who are just good enough to serve as a conduit for when Fortune decides to strike in the middle of a Danish cup match. Nicolai Geertsen has never been and will never be the world’s best soccer player. But he can say that for a few seconds against poor Slagelse, he was playing the world’s best soccer.