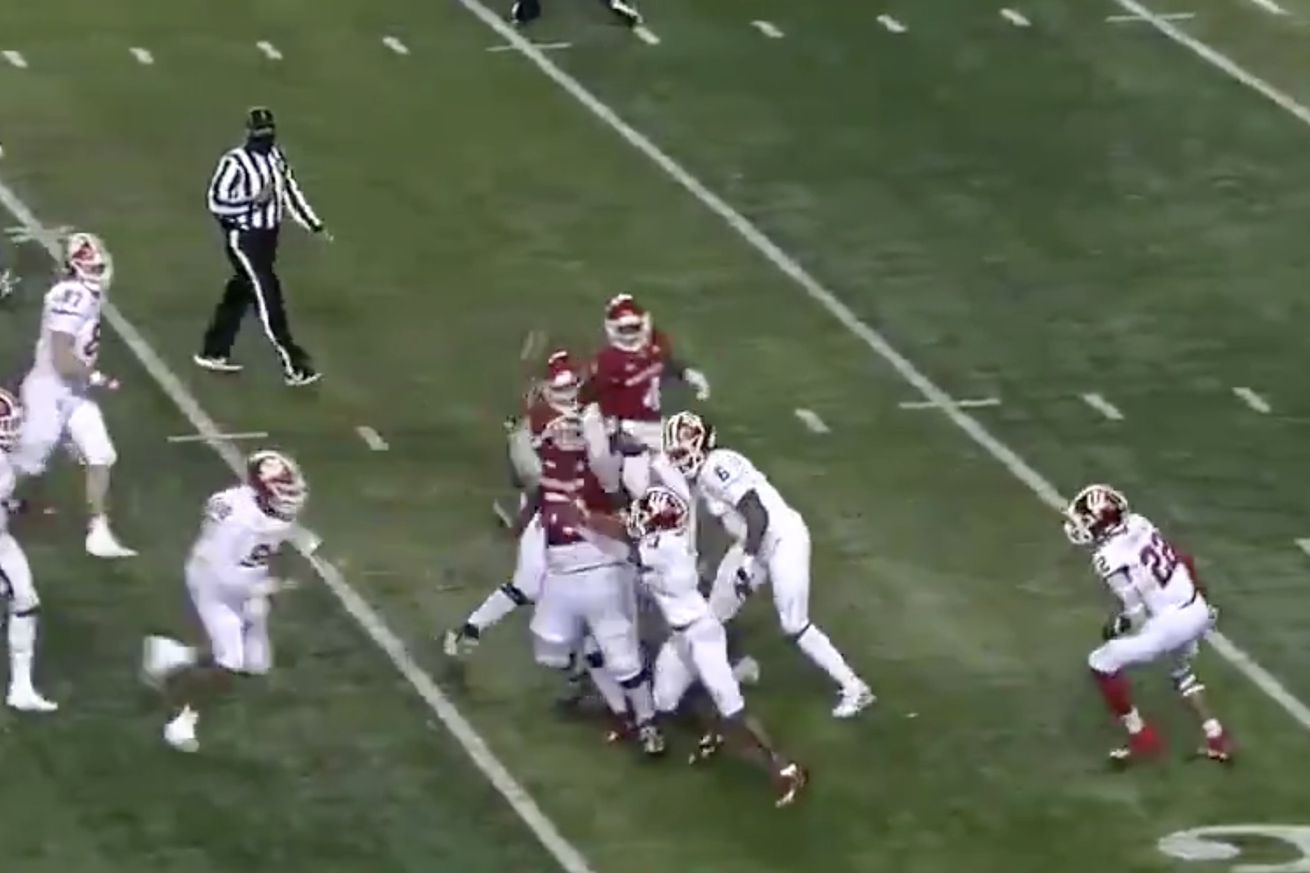 One of the most interesting aspects of sports is that things can unhappen. An event occurs and then ceases to have occurred, because a flag appears in the backfield, or an assistant referee signals offside, or Hawkeye decides the ball was going pitch outside leg stump, or … well, you get the drift.

This is an unusual, confusing phenomenon. We live time-directional lives. Stuff doesn’t just unhappen very often. Yet here is one of the great plays of 2020, happening and then unhappening:

I’m not even going to try dissecting this splendid carnage of laterals. It’s a glorious, drunken mess, somehow including a blind, two-handed, overhead pass that forces me to say ‘wheeeeee’ whenever I see it (which is a lot, because I have been watching this on replay for … a while at this point). By the time the dust settles, Rutgers have somehow turned 4th and 32 into a touchdown, cutting Indiana’s lead to 37-27 and just maybe putting themselves into position to mount a comeback.

Except they didn’t, because this heaving mess of football was deemed illegal. Here’s what the box score says:

Was there a forward pass in there instead of a lateral? I don’t know. Probably? But it’s a little bit unsettling that this absurd, wonderful chain of nonsense can be scrubbed from the record over something as inconsequential as breaking the rules of football. This might have been the best play of 2020, and now it’s not even a play at all*. This is the sports equivalent of “and then they woke up and it was all a dream”.

*Obviously it did actually happen, because you can see it and I can write about it, but the ruling on that second lateral has stripped the sequence of all structure and meaning.

The more heavily a sport is officiated, of course, the more it exists in this oneiric space. While Rutgers’ defiant chain of not-actually-legal passes was playing out, it felt real, but after Bo Melton sauntered into the end zone, the referees could choose between real and not-real and opted for the latter.

We’re used to this sort of thing in football, where a penalty can invalidate pretty much anything and the stop-start nature of the game invites a frankly silly degree of scrutiny. But in other sports, the sublimation of play to rules gets pretty awkward. European soccer, for instance, is finding that by introducing video replay to key events, the sport is becoming almost terminally confused.

Previously, the liminal space of normal play had been guided by a referee making instant, frequently flawed decisions, collapsing the events on the pitch into the record of the game. Now there’s a mechanized bureaucracy at work, and although VAR is certainly more accurate than the snap decision of an individual it’s created a pause between the emotional reality of fandom and the actual ruling of the sport that never before existed. Naturally, this is causing some grief.

I’m not making a value judgement here, by the way. One of the most common complaints in soccer is that the referees suck and are screwing your team in particular — they do, and are screwing mine — and without those complaints it’s difficult to see the motivation for VAR at all. We want the rules of our games to be followed.

But still, it’s weird that facts become un-facts after the event. It’s weird that it can be decided that something we’ve seen, something that made our collective pulses race, somehow never actually happened. Societal reality (this applies in areas like politics and law as well) can suspend and overwrite our interpretation of physical reality, and frankly that is wild.

Anyway. Well done Rutgers for coming up, however, briefly, with the best football moment of 2020. We’ll always remember it, even though it didn’t happen.