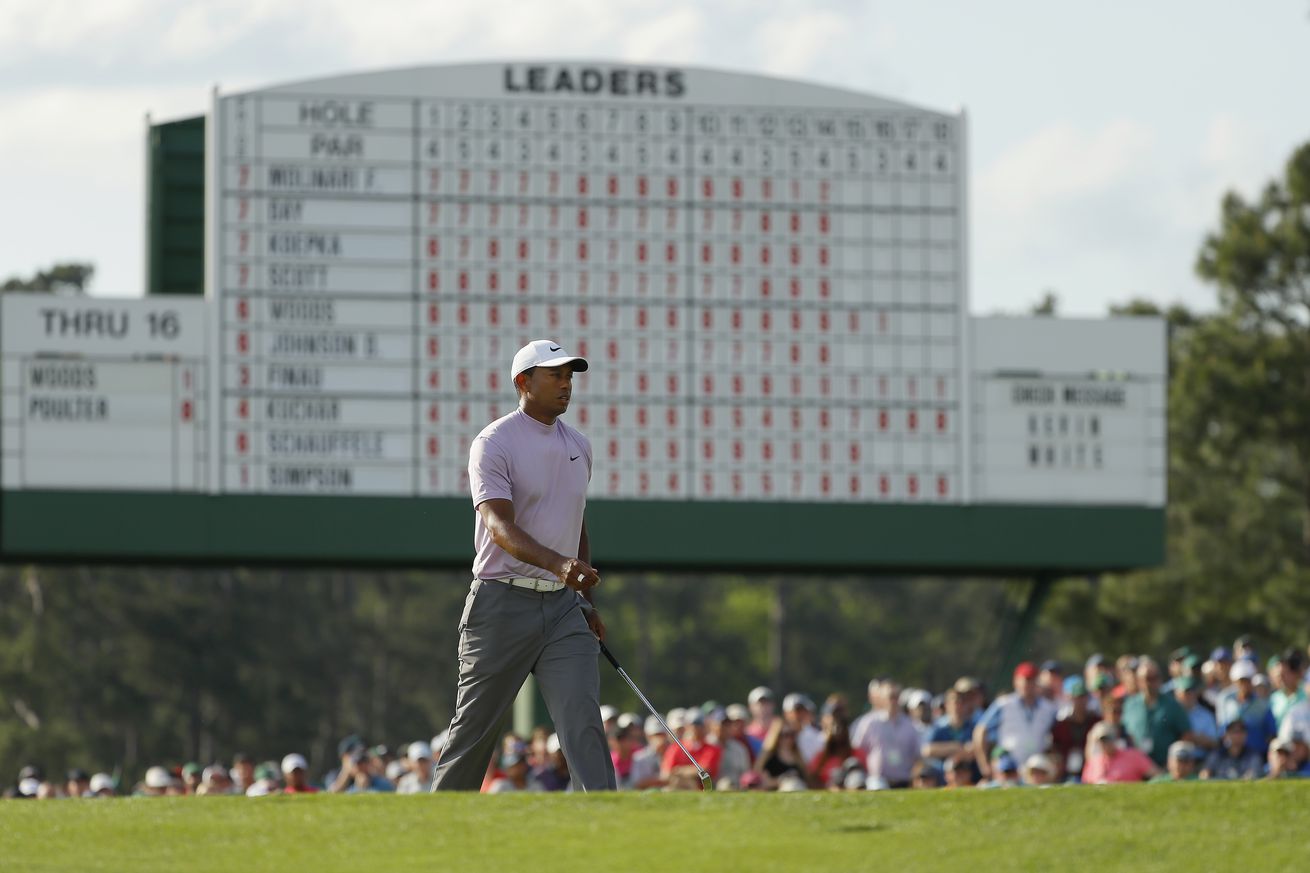 Tiger Woods has a fifth green jacket in his sights, which is enough to make even a Masters “patron” lose their senses.

To say the loudest roars at a golf tournament are for Tiger Woods is not revelatory. We know he’s the biggest draw on the course and the one player that generates the most excitement. It’s been that way for 20 years at the Masters. But it’s hard to capture just how much he holds the entire crowd in thrall.

At the 11th hole, Tiger’s ball landed in the muck outside the ropes. Rain pounded Augusta multiple days this week and the crowd traffic has worn any semblance of grass into this mixture of mud and kitty litter-ish gravel they put down to mitigate the mud (green colored where there is supposed to be grass and brown-colored gravel where there’s supposed to be pine straw). That kitty litter type stuff is quickly compacted into the mud. The resultant substance and smell is not particularly pleasant.

Tiger’s ball was sitting on this stuff to the right of the 11th hole, where he had a chute to try and hit a cut shot out of the trees and onto the green. He executed the shot and then marched out of the trees, the ones added in 2003 that have so offended many golf course architecture geeks. For five minutes after Woods moved on, gaggles crowded around the divot Woods took out of the muck. Weekend hackers practiced the swing and joked about the play they would have to make from the same spot. A kid reached down to touch the indentation in the mud. An older woman picked up some shrapnel from the detritus and put it in her pocket. Another kid followed and did the same. Then a woman grabbed some piece of the muck and said “Yum, I’m going to put this in my mouth.”

Again, this was not a particularly pleasant mixture from some verdant piece of beautiful Augusta National. But Tiger makes these galleries do irrational, weird things. Like hover in the trees and look at some random crater in the mud and proclaim you want to eat it.

Then came the reactions at the 13th, 15th, and 16th, the loudest roars of the week. A simple six-foot putt left my ears ringing on the side of the bank at the 13th hole.

Tiger can even have the “patrons” losing their sense of place and running afoul of Bobby Jones’ and Augusta’s spectator guidelines. At the 12th, we got a loud Baba Booey after Tiger made impact, as if we were at Liberty National and not Augusta National. At the 16th, there was even some light booing from the adjacent 17th tee as Ian Poulter arrived at his ball behind the green. Booing! At the Masters! The low hum was promptly muted by security, who marched toward the area and told them to cut it out immediately.

So this goes beyond the roars. Tiger makes these people lose their senses in the frenzy of power-walking up and down the hills of Augusta. The early start Sunday may not give them time enough to loosen up but if he’s on the lead or on the move on the second nine, it will crescendo and that’s something his playing partners will have to deal with in a way they’ve never encountered.

The shots that got him there

Two wedge shots stuck out to me most watching Tiger come in with a 33 on the second nine. It appeared he would squander the par-5 birdie and eagle chances that this course tantalizingly presents and feel mandatory if you want to make a charge at the top of the leaderboard. He played the par-5s in even-par on Friday and his strokes gained on those holes were among the worst in the field. Tiger has obviously owned those holes throughout his career and used them to build insurmountable leads, at Augusta and everywhere else.

Woods did not get home in two at either the 13th or the 15th holes in the third round. He’d need a delicate wedge shot and steady putt to get up-and-down to make those crucial red numbers. Francesco Molinari was behind him running off four birdies in a row and failing to at least pick up a birdie at the par-5s might put Tiger out of reach for the final round.

Then Tiger hit a low spinner from 70 yards to the back of the 13th green to six feet and dribbled a chip shot from the back of the 15th green to two feet. It was not long ago we’d diagnosed Tiger with the chipping yips, a problem that threatened his career perhaps more than any back injury and in a much more embarrassing fashion. If one had such a problem, a chip at Augusta’s 15th hole off an upslope with the grain against you and water behind with the pressure of the Masters and an 11-year major-less drought might accentuate it. Instead, he put it to two feet.

Tiger may have the crowd with him and his full game with him and it might not matter. Francesco Molinari is a machine, one that choked out an historic comeback major championship attempt by Tiger last summer at The Open. Now he’s refusing to make bogeys on the biggest stage and frustrating the Tiger backers again.

The mania around Tiger freaking Woods somehow being back in contention at the Masters is a quick way to lose sight of the fact that Frankie’s golf has been legendary the last 12 months.

No Masters champion has ever made fewer than 5 bogeys that week. Molinari has one through three rounds.

Tony Finau and the passage of time

The third member of the final tee time is also on the verge of doing something historic. Close golf watchers should not be surprised to see Tony Finau playing in the final group at a major championship. Finau has also been one of the most consistent players in the world over the past year and the advanced analytics all pointed to big wins on the horizon.

With Finau, we will have first ever pro of Tongan and American Samoan descent in the Masters playing alongside the first African American to win the Masters. Woods, as you might imagine, had a dramatic influence on the direction of Finau’s life.

“Watching the ‘97 Masters was a turning point in my life,” Finau told me before last year’s Masters, his first. “That was a time, watching Tiger — I was kind of torn between sports but watching him do what he did there really inspired me to play golf and I think that was kind of the start of it all. I don’t really think I can put into words what it means to me to be playing the Masters.”

After Finau committed to golf as a kid, he would beat balls into a spray-painted mattress set up against the wall in his garage because his family could not afford the money it cost to pay for balls at the range. Now he’s playing in the final group in the final round of the Masters alongside the same Tiger that pulled him into the sport.

There will be other challengers from the groups ahead, but the final tee time alone is enough to have us set up for an incredible Sunday at the Masters.