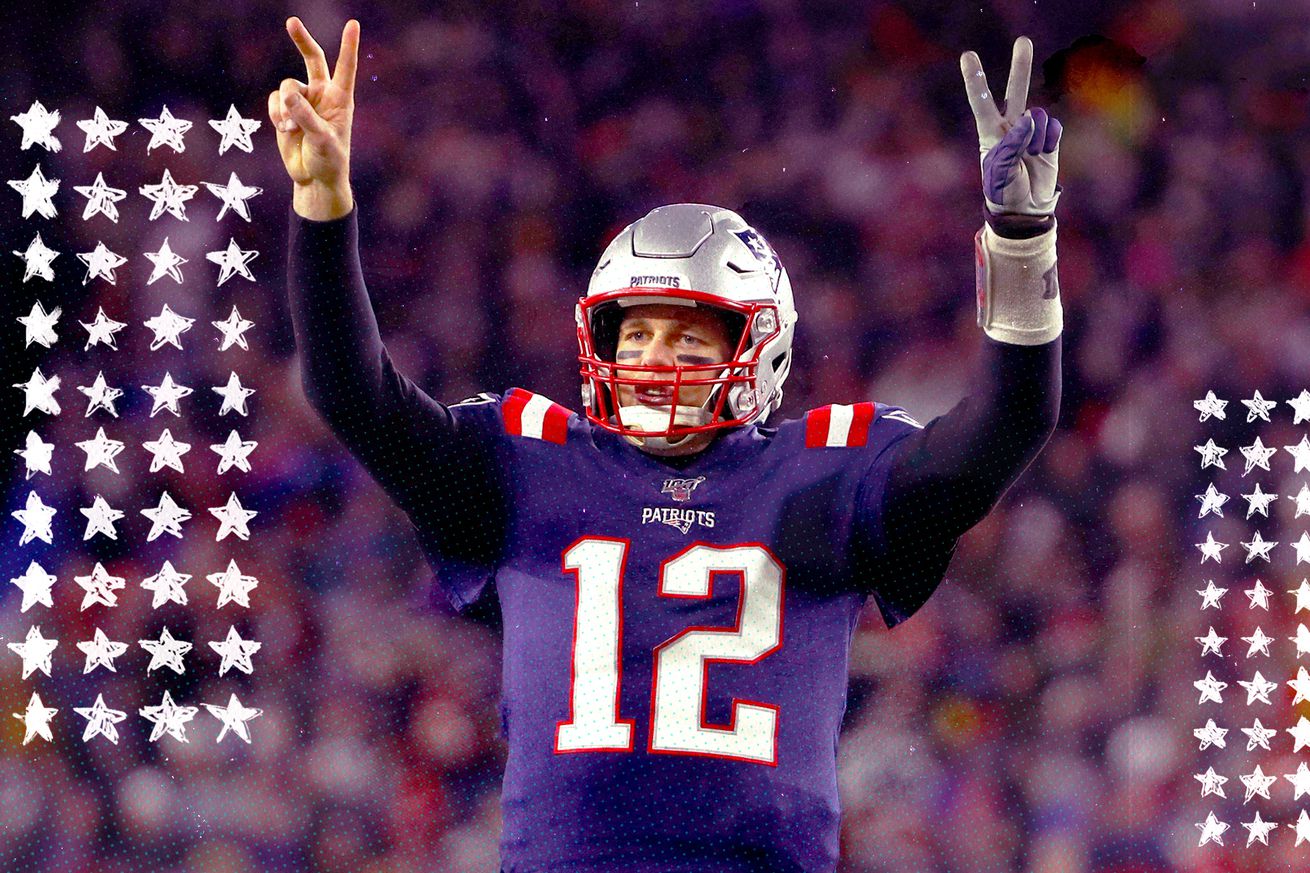 Tom Brady is in his 20th season with the Patriots.

This time, there are actual reasons to believe Brady might be ready to move on from New England after the season.

The end was always coming for Tom Brady and the New England Patriots. Each year, the speculation about the eventual breakup continues. We all take turns talking about how this might be Brady’s final season in New England, but then Brady, or someone associated with his camp, will explain how Brady will play until he’s 50. Come the new league year, he’s still on the roster. Rise and repeat.

As this season winds down and the Patriots roll to likely another AFC East title and a possible ninth straight AFC Championship Game, it would seem like the annual postseason discussion about a pending Brady-Patriots split is useless. However, Tom E. Curran, a journalist who rarely dabbles in #HOTTAKES, wrote a piece for NBC Sports Boston about the Patriots and Brady breaking up. It was not an article based on conversations with people in the “know,” but his opinion based on his long time covering this team and its quarterback.

Unlike previous years, there are actual reasons why Brady would leave the Patriots.

Reason No. 1 Brady would leave the Patriots: Money

Brady will be a free agent this offseason and cannot be franchise-tagged. So if the Patriots and Brady want to go their separate ways, it would be easy. That doesn’t mean feelings won’t get hurt — especially over money, like most of these negotiations do — as that’s typical in these high-profile quarterback splits. Joe Montana and Peyton Manning, in particular, come to mind.

Brady has taken “pay cuts” over the years, and it’s been a happy marriage between the parties. He’s currently 13th in average salary per season for a quarterback, far lower than his performance would indicate. He’s taken pay cuts, or team-friendly deals for two reasons.

The first reason isn’t rooted in fact, but more in common opinion, and one that Brady himself has suggested: His wife, Gisele, earns more than he does, so he doesn’t “need” more money. I’ve never bought this, because we all want more money. Besides having a larger bank account, it’s a pride thing for most players. We want to be tagged the “highest-paid player” at our position.

The second reason Brady has taken less money over the years is the more plausible one. The money the Patriots are saving in not making Brady the highest-paid quarterback is being used to pay for offensive weapons to help Brady as he ages. At least that’s what they are selling him. Except, they aren’t. And this is why I think Brady might think about leaving if he’s asked to take less than he believes is his market value.

Reason No. 2 Brady would leave the Patriots: Lack of weapons

The Patriots hardly have any offensive playmakers. Their offensive line has gotten worse. The money that’s supposed to be spent is not being spent. Draft picks being used on offense aren’t panning out. After losing Rob Gronkowski, Brady’s most reliable weapon, the Patriots did nothing to replace him.

There was a slim free agent market for tight ends in 2019, but Jared Cook was available and signed a modest deal to team with Drew Brees. He’s been successful this season. Tyler Eifert felt like a low-risk, high-reward signing for the Patriots. Nope. Pass. Instead, they went with Ben Watson, who can’t move anymore as he’s gotten older. The Patriots didn’t replace Gronk in the draft either. In short, they did nothing to help Brady.

The Patriots also needed a speedy WR to help them take the top off a defense and command double-teams, which would free up Julian Edelman for one-on-one situations. Remember now, Edelman isn’t a No. 1 wide receiver. He’s a No. 2. Gronk was always the first option.

They attempted to fill that role with Demaryius Thomas, a speedy wide receiver off a major injury. That did not work and they traded him after signing Antonio Brown, which of course didn’t work either. They cut Josh Gordon. They traded for Mohamed Sanu, but he’s better in the slot and has been banged up. They drafted N’Keal Harry in the first round, and even after coming off injured reserve, he’s been mostly a non-contributor for the team.

Not having viable receiving options that Brady trusts is killing this offense. Brady trusts no one outside of Edelman and for good reason. The receivers are either dropping passes or not running the right routes. They cannot get off press coverage, which is allowing teams to pressure Brady more often. It’s not that Brady isn’t seeing the pressures; he just has no one getting open. He still sees it all, and his arm strength is fine. He’s got to be upset at his lack of weapons.

This is why Brady would bolt from New England. The Patriots ask him to take less money, don’t use that money to upgrade the skill position players around him, and his play suffers because of it.

From the Patriots’ perspective, it doesn’t make sense to let Brady go unless they’re ready for a rebuild that might be without Bill Belichick. There’s no heir apparent to Brady, and there doesn’t appear to be a plan to make that happen soon. If Brady leaves, no quarterback in the NFL is coming to New England and winning without playmakers on the roster.

The Patriots letting Brady walk would signal this run is over, and it’s time for a reboot.

If Brady and the Patriots split, where would he play in 2020?

I’m sure Brady’s not retiring, so the question then becomes which team he would sign with as a free agent. We have to look back to Peyton Manning to get some clues. Manning signed with the Denver Broncos because he wanted a stable front office and more importantly, a defense that could complement him.

The less obvious spots are the Carolina Panthers and Tennessee Titans

Panthers team owner David Tepper just fired Ron Rivera and seems ready to do whatever is needed to win. They have the offensive weapons and plenty of talent on defense. What they don’t have is a head coach at the moment, and maybe Patriots OC Josh McDaniels is hired along with Brady coming to the Panthers. But, does he want to play in a division with Drew Brees and Matt Ryan? And are the Panthers a big enough market?

Tennessee should not pay Ryan Tannehill for the long run. A short-term deal? Sure, but a long-term deal? No. The Titans are coached by a former teammate of Brady’s, Mike Vrabel, and they can play defense. They have a run game and a general manager who appears to know how to draft. Brady would be able to stay in the AFC, where he knows all the teams well. Warmer weather and a lukewarm division could be appealing.

The obvious choice in my mind is the Dallas Cowboys

Of course, that’s if the Cowboys would rather have a 43-year-old Brady over a younger Dak Prescott. Hear me out with this one, though: Jerry Jones is getting up there in age. He wants to win NOW.

Hire McDaniels and sign Brady. Let Prescott walk. Brady now has the best offensive line in the league and an elite running back. Sign Amari Cooper to a long-term deal and draft a tight end. Weapons set.

On defense, they’d need to add some secondary parts and they’d be fine. It feels like a perfect match — that is, if Brady can handle playing for Jones, who loves the spotlight. Dallas is the market that can support a Tom Brady and Jones would let him do whatever he’d like in the facility. All of TB12 can be stationed in the facility if he’d like.

It feels bold, but something that can be pulled off.

In the end, it’s hard to know yet if this is really it for Brady and the Patriots. Maybe we all got suckered for another offseason. But it’s sure starting to feel like the breakup is coming, sooner rather than later.