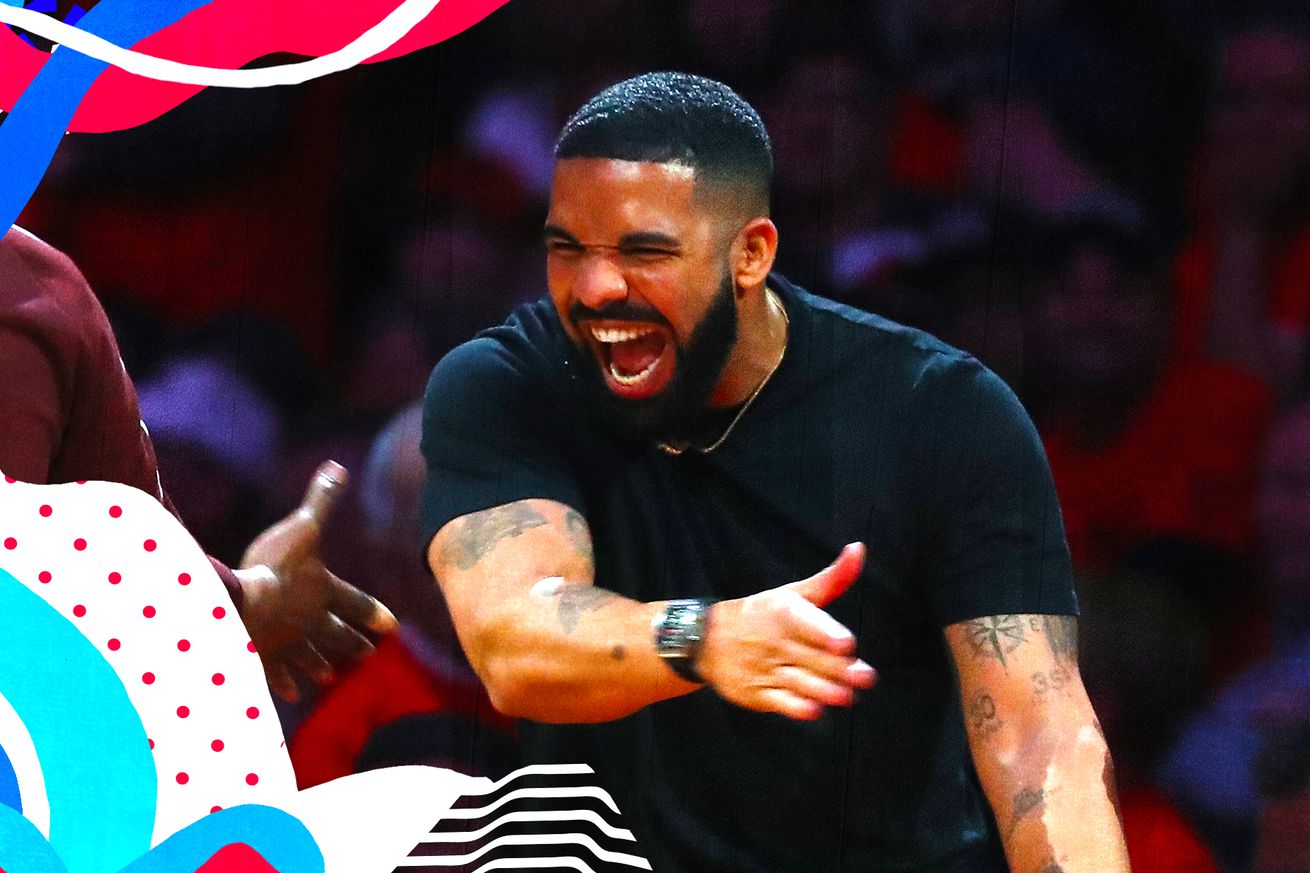 That OVO and that XO … the Toronto Raptors at his next show?

The Toronto Raptors secured their first NBA championship on Thursday night in Oracle Arena’s farewell, beating the Warriors in a fitting six games. Drake, who has been known to cheer for every team that has ever existed, finally had his hometown team win a title in his lifetime.

Drake’s history with the Raptors runs deep: He was named an ambassador to the team in 2013, the Raptors have worn gold and black OVO alternate uniforms in his honor, both he and the Raptors have pledged more than $1 million to fix local community basketball courts, and he’s often seen courtside at games. He even almost VERY unwisely started a fight with Kendrick Perkins last year.

He’s been all over the place with his sports fandom — which has given us all plenty to discuss over the years — but the Raptors’ title, in particular, means a lot for Drake.

Drake delivered one of these rants (which became a good meme) after the Raptors’ Game 5 win against the Bucks in the Eastern Conference Finals. So after the Raptors secured the title, he was back for seconds on the biggest stage:

Now, just because you try to look and sound authoritative about something, doesn’t mean you are. Drake’s has always tried to show a hard, Tough Guy exterior, but we’ve known him to be otherwise in reality.

Here’s a good chunk of what Drake said in bold, annotated in italics:

Man listen, this is poetic. This is poetic, you just gotta watch it happen. OK, solid start.

The six in six. Predictable, but fine.

Kyle Lowry with a ring. Kawhi Leonard, bringing a chip to the city. Alright, still fine.

I want my chips with the dip, that’s all I know. What lmao?

I don’t want my chips plain. I want my chips with the dip. So bring them dips. [TFW you are an upset upper middle class citizen at a party.]

That dynasty’s over. We did what we had to do. Praying for KD. Back on track!

Praying for Big Papi. But tonight belongs to Toronto. OK, nope, definitely don’t wish well for Big Papi after this week’s incident and then throw a big ‘ol BUT on there!

Perhaps he should get somebody to write these ahead of time as well, because this certainly won’t be the last time he does this.

He’s less likely to claim other teams, now that his hometown Raptors have claim to a title.

(OK, not sure about that one actually.)

However, we are getting a couple of new songs.

While Big Drunk on Instagram live after the Raptors’ win, Drake said he had two songs dropping Friday, and also posted the artwork on his IG:

The songs are nothing he couldn’t have had prepared and ready to fire off. As annoying and corny (among other things) as he can be, there’s no doubting he’s a talented artist. However, depending on his mood (read: does he want to be a try-hard), this could either be either great or awful.

This may not be the only championship music we get from Drake, either.

At least, it seems unlikely that would just forego using imagery from these Finals in his songs at some point. After all, this is the guy who used a picture of Joe Carter on his “Back to Back” diss of Meek Mill.

Some of that imagery may very well appear on the tracks we hear Friday. Drake could use Kawhi’s postgame podium speech as an intro, similar to how he sampled “Jimmy Smith Rap” on “Pound Cake” with Jay-Z:

“Last summer, man. I was going through a lot. I had a great support system and kept working hard, working hard. I had my mind set on this goal right here. I came to a team with a new coach. That mindset was the same as mine. Trying to get that Larry O’B over there. This is what I play basketball for, this is what I work out for all summer, and during the season. I’m glad my hard work paid off.”

Depending on how #online Drake is, it could also be SB Nation writer Zito Madu’s brother, internet famous for his relatable feelings on Kyle Lowry:

Told my little brother that Kyle Lowry signed back with the Raptors pic.twitter.com/DOx62EMw3U

The outro to one of the tracks lies somewhere in here:

Just did a really cool interview with Kawhi and Kyle Lowry, about how they got here and everything this title means, and here’s what happened before we even started rolling. Special. pic.twitter.com/jpZIBJlxdI

The artwork for the track can be either Pascal Siakam on SportsCenter with Scott Van Pelt:

OR this image from Game 1 of the Finals with him and Stephen Curry, which seems preferable for Aubrey:

drake’s absolutely making this the artwork for a single if the raptors win this series pic.twitter.com/Nj6YpsLrkj

Also, because Drake got what he wanted in the end, you can expect him to throw some well-wishing bars in there for Kevin Durant and Klay Thompson, who could both miss the 2019-20 season with their respective injuries.

Of course, it’s still all love between him and the Warriors, as evidenced by his FaceTime chat with Curry after the series:

The OVO ghostwriters are going to be busy this summer.

Music aside, tattoo(s) are definitely on the way.

No duh, right? If you look at Drake’s resume of tats, this is a safe bet. Drake has 34 tattoos, which include portraits of Lil Wayne, his dad, Sade, Rihanna eating ice cream (I know, jeez), his uncle Steve, grandmother Evelyn Sher, Aaliyah, and his mom Sandi.

Of course, there’s also his Curry and Durant number tattoos as well. He kind of has to put something Raptors on there. Perhaps Kyle Lowry’s stat line from Game 6, or Zito’s brother.

Many more Instagram posts are on the way as well.

This is one of the most predictable posts ever:

Photoshop is a gift and a curse.

His last hurrah will be at the parade.

Drake probably understands that his last chance to cement his legacy forever with this Raptors team is to do something at the parade. It’s why we remember Mark Madsen, it’s why we still yell in our best Shaq voice, “CAN YOU DIG IT!?”, and it’s why Jordan Bell is our Hennessy overlord.

The thing with Drake is, we just don’t know how far he’ll take it. But we do know he has no problem pushing boundaries, which we’ve known to be good, and sometimes bad for him.

The Summer of (NBA Champion Toronto Raptors Fan) Drake is upon us.