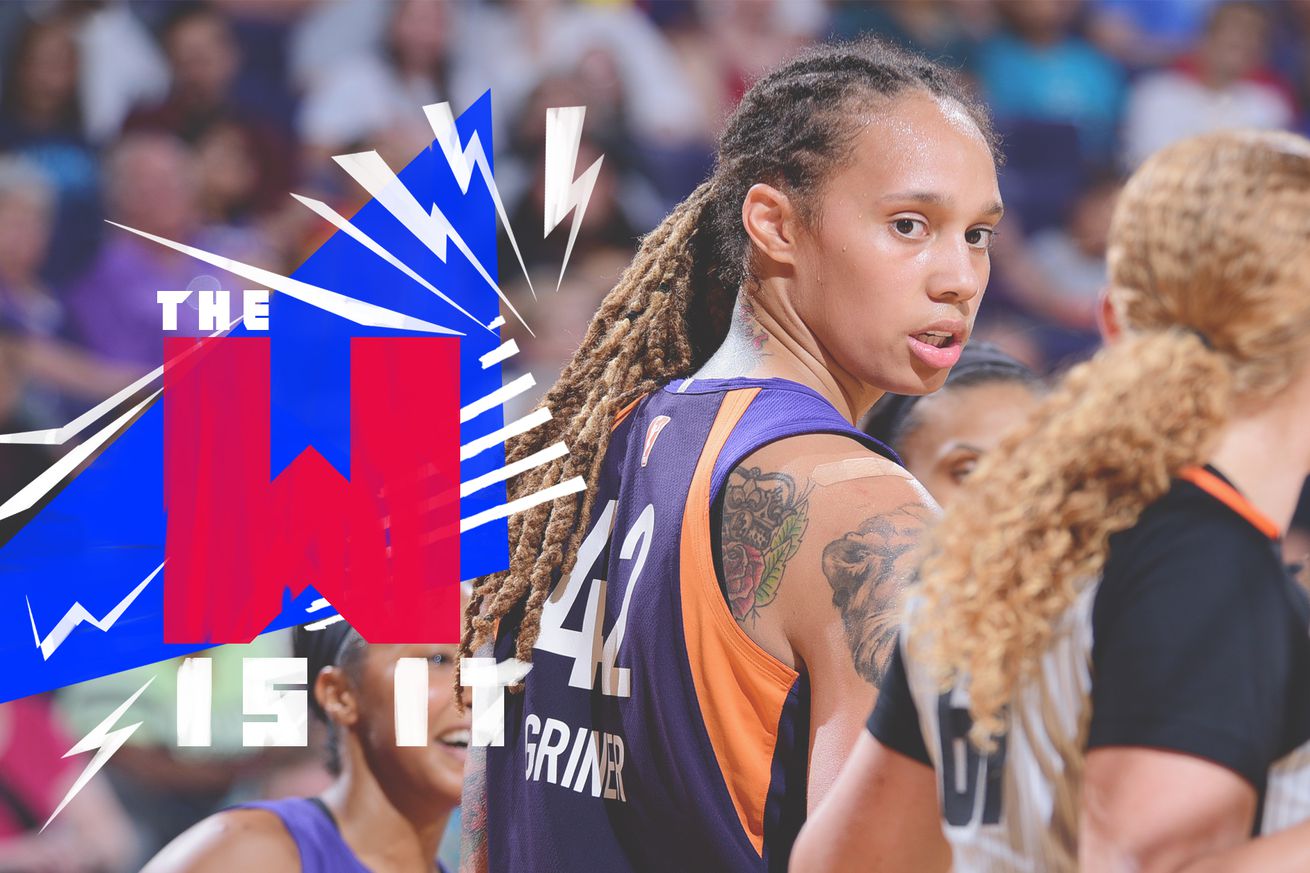 Brittney Griner’s ominous comments about her place in the W are worrisome. But the league’s suspensions feel fair.

Welcome to The W Is It, a weekly column about all the stuff that freakin’ rules in the WNBA. Have any tips of topics to cover? Find me @mellentuck on Twitter.

Seven-time WNBA All-Star Brittney Griner turned to box out Kristine Anigwe in the fourth quarter of a close game on Aug. 10, in which her Phoenix Mercury led the Dallas Wings by just three points. What should’ve been a mundane basketball play turned into an all-out brawl.

With Griner’s arms out wide, Anigwe latched to her right forearm and yanked it down. Then, Anigwe came over the top with an open arm and whacked Griner on the top of her head, prompting Griner to turn to Anigwe upon impact and swing a quick punch at the Wings big. Anigwe backpedaled nearly the entire length of the court to get out of harm’s way as Griner was restrained by a referee and teammate Leilani Mitchell.

It didn’t end there though, as Wings forward Kayla Thornton tried to hit Griner while she was wrapped in the ref’s arms; instead Griner shoved her with an open palm. Wings guard Kaela Davis and Mercury guard Diana Taurasi raced off the bench to separate their teammates, but were ejected from the game.

The fallout from the biggest brawl in recent WNBA history has massive implications for Griner’s future in the league, her Phoenix Mercury team’s playoff hopes, and how the league handles on-court spats going forward. The league announced five suspensions Tuesday morning: Griner for three games, Anigwe and Thornton for two games, and Taurasi and Davis for one game.

Two days after the incident and one day before suspensions were announced, Griner made an ominous statement about possibility leaving the WNBA if the punishment from the league was too severe.

“How they handle this will determine a lot about the future,” Griner said, according to the Arizona Central. “Because how can I fight for some league that doesn’t even want to protect their players?”

Saturday night was the culmination of Griner’s season-long frustration with Anigwe. Griner says she spoke to referees during the second game she matched up against Anigwe this season to watch for her physicality in the post.

Griner’s actions escalated a scrap between two players into an all-out brawl that ended with six ejections, though. Her three-game suspension feels appropriate.

But she also has a legitimate gripe. Anigwe threw two cheap shots and there wasn’t a single whistle blown until Griner swung at her.

Slowed down and zoomed in so there’s no mistake. Griner boxes Anigwe out, Anigwe goes into Griner’s elbow. Then A holds and pulls at her arm and does a weird karate chop to G’s face. Then it’s off to the races. #WNBA pic.twitter.com/1Z9UCD5STV

The Mercury’s COO, Vince Kozar, quote tweeted this image from the last time Griner played against Wings too.

Just to be clear: this was the LAST time we played that team. Not last night, the time before. https://t.co/OZAFjzvZLS

“I’m not doing it for the money because we don’t make enough and they want to fine me for every little thing,” Griner said. “I’m getting techs for protecting myself in games and flagrants because they always only see me. They never see anything beforehand. I’m basically not getting paid this summer already (due to fines).”

Griner’s exaggerating, as she’s paid close to the league maximum $117,500 salary and has not accumulated anywhere close to that in fines. But she’s in position to make such a threat because she earns a seven-figure salary from Russian team UMMC Ekaterinburg during the winter. Most of the league’s top players earn well below what their market dictates abroad to play in the WNBA.

The league’s tallest player at 6’8, Griner’s consistently believed she’s subject to different officiating than her peers, and that allows smaller players to get away with more than they should. That physical play has persisted since she entered the league in 2013, and she’s clearly fed up.

“Me, Liz [Cambage], and Syl [Fowles] are big,” Griner said after a July 30 game against the Washington Mystics, referencing the league’s two other elite centers. “I get it. But it doesn’t take away that if I go to shoot and they raise up my arm and slap my hand, that’s still a freakin’ foul. It doesn’t matter if [Mystics guard] Kristi Toliver is hitting me, it’s a foul. It still alters your shot. It doesn’t matter how big you are.”

(The morning after a July 23 game against the Storm, Cambage showed me the bruises she suffered from her wrist down her forearm the night before. She took just two trips to the free-throw line.)

This incident is bigger than just Griner and how centers are officiated, too. The league’s suspension rollout establishes precedent for similar actions in the future. The league’s collective bargaining agreement expires after this season ends on Oct. 31.

The W hadn’t seen an altercation on the scale of Griner vs. Anigwe since the Detroit Shock and LA Sparks in 2008, when 11 players were suspended after Plenette Pierson and Candace Parker fought. Those suspensions ranged from one to four games, with Pierson getting flagged the most for inciting the incident. Parker got just one for throwing a punch.

In a press release, the league explained Griner’s three-game punishment was for “throwing punches, escalating the incident, and pushing Thornton’s face with an open hand.” Anigwe’s two-game suspension was for “instigating the initial altercation and taking an open-handed swing at Griner, and Thornton’s two were for “escalating the altercation.” Taurasi and Davis were suspended one game for leaving the bench, which is a league rule.

“Today I went on the court to make sure my teammate didn’t get jumped,” Taurasi said after the game, according to the Arizona Republic. “(Griner) got punched in the face and then someone ran on her back and threw punches at her face. I would do that 100 times out of 100 times.”

Some of the action leading to 6 ejections in #mercury vs Dallas game pic.twitter.com/knrxo0ZaDe

Regardless, the impending suspensions are bad news all around. The league will miss one of its stars in Griner for an important stretch of a season that’s already lackIng starpower. Storm legend Sue Bird has missed the entire season to a knee injury, Breanna Stewart will miss the entire season to a torn Achilles suffered playing in the EuroLeague championship for Dynamo Kursk, Maya Moore took the season off, and Taurasi has played just one game due to a back injury. Taurasi is expected to return this season, but her one-game suspension will set that back even further.

Without Griner for some period of time, there’s no guarantee the Mercury (11-12) even make the postseason. The Indiana Fever (9-16) trail Phoenix by three games in a 34-game season. Stranger things have happened.

And now for some fun stuff.

Candace Parker’s back to throwing no-look dimes. The Sparks are dangerous with her healthy again.

This fakeout. Oh my.

Breanna Stewart is back jogging on a treadmill!

Just four months after tearing her Achilles, Stewart is back in motion. Hopefully she’ll be a full-go by next season.