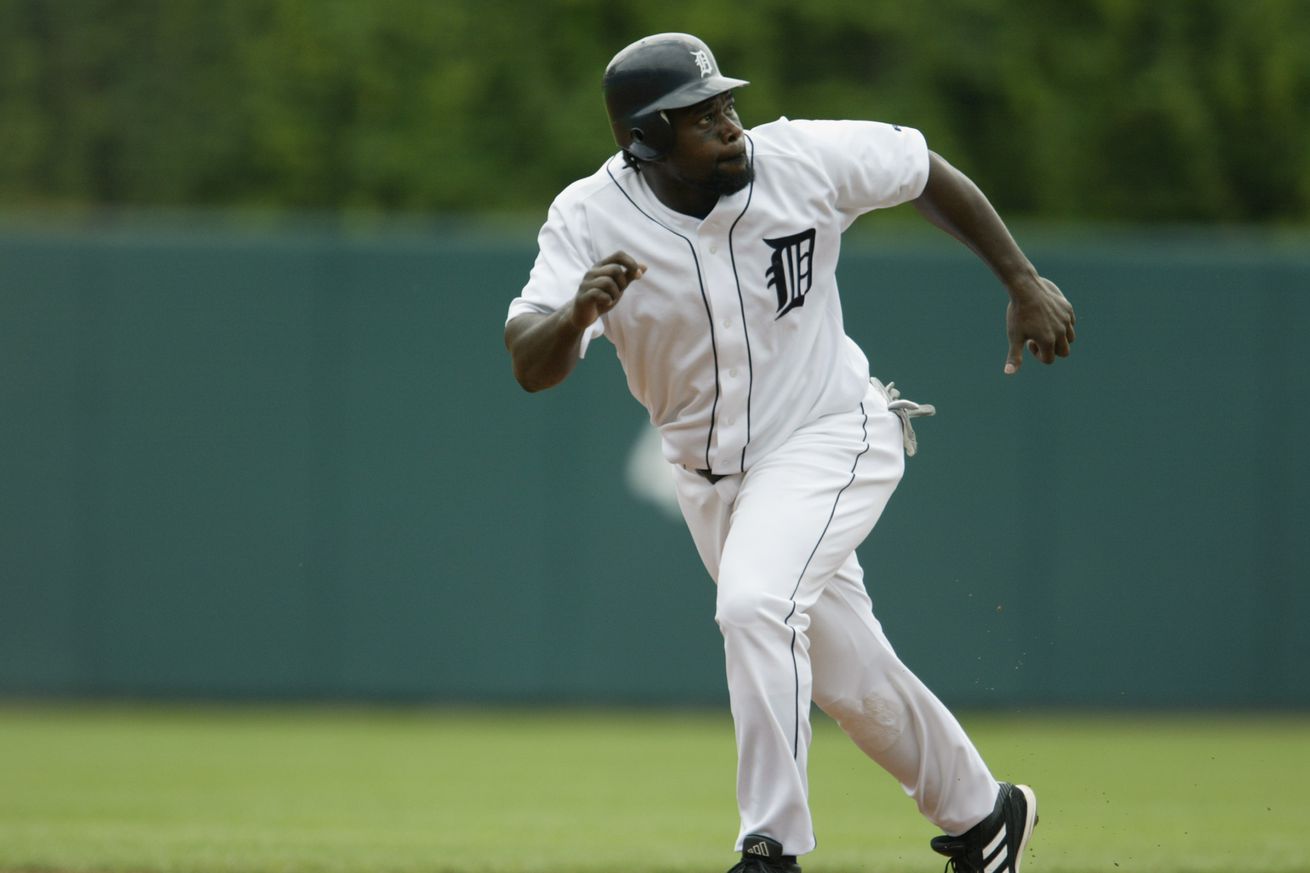 It’s a pleasant early-May evening in Baltimore, and designated hitter Dmitri Young is at the plate. Facing off against him is Orioles reliever Buddy Groom. At first base is Bobby Higginson, beneficiary of a walk and the potential winning run. The 2003 Detroit Tigers, who don’t win many games, might just pull this one out, despite blowing a 6-3 lead in the bottom of the eighth, committing two errors and allowing the hosts to waltz back into the game.

Young is probably the only hitter the Tigers would want at the plate right now. Most of the rest of their lineup sits somewhere between ‘unfathomably bleak’ and ‘please check to ensure this person is alive.’ Their first baseman, Carlos Peña, is hitting .186/.252/.320. Eric Munson at third is at .203/.278/.316. I’m going to stop listing off terrible batting lines now, but you get the drift. These guys suuuuuuuuck.

To be fair, Young hasn’t been great over the first 30 games of the season either. But this game has been different. In his first at-bat, in the top of the second, Young hit a solo home run out to right. Then he hit an RBI triple in the third to bring Higginson home and make it 4-0. In the 5th? Another home run. He grabbed an RBI single in the 7th for good measure, giving the Tigers that 6-3 lead they’d blow in the 8th. 4-4 with two homers and a triple? That’s a very nice performance.

It also means that in the ninth inning of an otherwise meaningless game of baseball, Dmitri Young has a shot at history.

To hit for the cycle, a batter needs to hit a single, a double, a triple and a home run in one game. This is, if not an under-appreciated feat, certainly a rare one. In the 50 years before Young faced off against Groom, it had been done 109 times, about twice per season, which is actually fewer than the number of no-hitters thrown during that span.

Although Damion Easley notched one in 2001, the Tigers have not exactly been blessed with cycles. There was a gap of almost 43 years between their seventh (Hoot Evers, who was not an owl, in 1950) and eighth (Travis Fryman, also not an owl, in 1993). Young has a chance to put the membership of the Tiger Cycle club, which includes Hall-of-Famers George Kell and Charlie Gehringer into double-digits. All he needs to do is to hit a double.

Then Young scorches a fly ball to deep left center field. In the vicinity are Melvin Mora and Gary Matthews Jr., but neither has a chance on the play and the ball gets down. Higginson is off to the races, scoring easily to make it 7-6, and Young has his double and his cycle.

But then he doesn’t.

Instead of stopping at second base, Young hares onward, pulling safely into third with his second triple of the night. From a purely baseball perspective, this made sense: the Tigers’ lead was narrow and their bullpen fragile, and getting to third with one out could lead to an important insurance run. Young, now 5-5 with two home runs, two triples and five RBI, has given up his shot at history to help his team.

There is of course something profound, poignant and perversely magical in Young’s decision. Like all team sports, baseball involves sacrifices, but by and large individual achievements power team ones, and conflicts like this don’t occur very often. He never even considered stopping at second: “It crossed my mind, but since the game was close, my individual accomplishment took a back seat. The run is the important thing.” Instead of becoming the 258th player in major league history to hit for the cycle, Young became the first to give one up for an insurance run.

But that noble sacrifice isn’t the whole story. Because of all the teams in MLB to give yourself up for, the 2003 Detroit Tigers were just about the least deserving in history. I mentioned earlier that their lineup was a catastrophe. Their pitching was worse. They couldn’t strike anyone out, gave up a walk almost every other inning, and allowed a ridiculous number of home runs. This was a team constructed to roll over and lose.

They did that job perfectly. It took a 5-1 run at the end of the season to secure a 43-119 record, the second-worst season in modern MLB history. They were atrocious throughout. On May 6th, when Young gave up his cycle, the Tigers were 5-25. 5-25!!!! Young had to endure a full season of being the only viable player on the whole roster. While most of his teammates could barely crack the Mendoza line, he hit .297/.372/.537 with 29 home runs.

With a runner at third base and less than two out, the average team in 2003 would have expected to get them home a little over half the time. But this is the Detroit Tigers we’re talking about, and so three pitches later the inning was over. Young stayed at third. Not only did this team literally throw away the lead Young had handed them with their 8th-inning miscues, they didn’t even have the decency to make good use of his sacrifice.

Making history and then giving it up is heroic enough, but making history and handing it over to a bunch of ambling chucklefucks who promptly punt it into space, knowing full well that was what was going to happen? That’s art. Well done, Dmitri Young. This was more memorable than a cycle anyway.