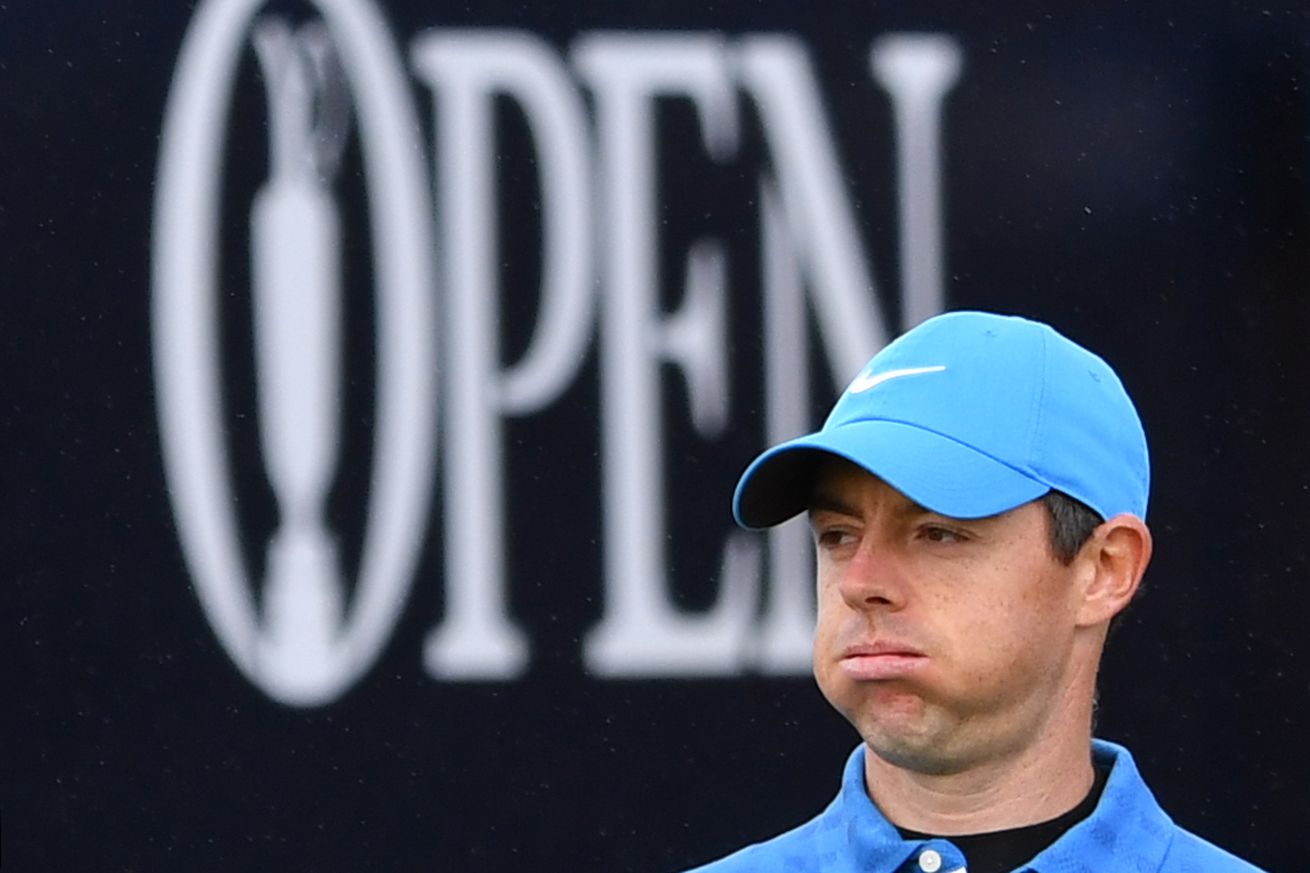 While you were sleeping at The Open: McIlroy’s disaster at the first hole, Darren Clarke provides the overnight entertainment, and the most beautiful kind of ace.

As European golf writer James Corrigan noted on Thursday morning, a paunchy and curly-haired 16-year-old Rory McIlroy missed a five-foot birdie putt on the first hole at Royal Portrush before blazing to his course record 61. At the same hole in the first round of the first Open at Portrush in almost 70 years, McIlroy missed another five-footer but this one was to “save” a triple bogey.

The tap-in for a quadruple bogey 8 and the parallel of the five-foot putts had me immediately re-reading a recent reminiscence of that famed 61 from the teenage McIlroy. In it, the typically forthright and insightful McIlroy admitted that he no longer has has the confidence of the 16-year-old kid that posted the 61.

“My confidence is probably more fragile now than it was then,” McIlroy said. “I had confidence and cockiness and sometimes I think I need to rediscover that a little bit even now.”

The 16-year-old starting quietly on a mostly empty Portrush carries a lot less weight than the Hall-of-Famer, purportedly in the peak of his career, playing as the betting favorite in the first major in his home country in 70 years. The common judgment and armchair psychology will be the opening quadruple bogey revealed the exposed nerves from the pressure McIlroy must have been feeling at this home Open. It’s the natural and quick leap to make and it’s not necessarily wrong. It’s just unknowable.

The quad outcome was likely just a mixture of mistakes and uncertainties, both mental and physical, at a horrible time. Standing on the first tee on Wednesday during a practice round with Justin Thomas, McIlroy blocked a ball way right and watched it sail out of bounds. Standing on the first tee on Thursday during a real round, McIlroy started his Open by yanking one hard left to cross the out of bounds stakes on the other side of the first fairway. Maybe that reduced 30-year-old confidence was shaken from the OB left ball on Wednesday and he overcorrected on Thursday. Maybe it was the nerves of being the headliner at a “home” Open. Maybe he’s just searching for a steady swing at the moment. Maybe it was a total fluke swing at the absolute worst time and with the worst consequences.

It was a quadruple-bogey start for the Ulsterman. #TheOpen pic.twitter.com/nzxm2G4UXI

McIlroy hitting three with a second tee shot was then compounded when he hit four into some traditional Open junk that forced him to take an unplayable lie. An OB ball and an unplayable drop all on the opening hole is maybe how the hungover 15-handicapper eases his way into his weekend round of 91. But not the Open betting favorite, course-record holder, and most talented player in the world. The sickening feeling set in that McIlroy had just been eliminated from the dream “home” win just 15 minutes into his championship.

It was painful. No one enjoyed watching it, even the snarkiest among us and especially not the Irish rooting on the home favorite.

Watching Rory make a quad on the first hole with Marty Carr (@CarrGolfTravel), son of Ireland’s greatest amateur. Speaking for all of Ireland, he says,”This is the cruelest thing imaginable. I feel this in my heart.”

Even with Tiger Woods in the field, McIlroy was the centerpiece of this British Open. He’s not from Portrush, but he is Northern Ireland’s most accomplished golfer, has that history with this specific course, and has, despite some underwhelming major results, played arguably the best golf of his career this season. McIlroy’s ascendance in the last decade, along with major wins by Darren Clarke and Graeme McDowell, played a significant part in the R&A deciding to bring The Open back to Portrush and Northern Ireland. McIlroy was going to be the main attraction of that return from the moment they announced it four years ago. It had all been building up to Thursday morning’s first round.

The form and confidence of the 16-year-old to play in with a 61 after the missed five foot putt did not appear to be with him on Thursday. It’s a little easier to pick yourself up from a missed five footer for birdie than a missed five footer for triple bogey with all eyes watching you at a major. McIlroy continued to hit shots totally out of character and looked stunned on the subsequent holes. He hit a poor drive and blew an easy birdie hole at the second and then struck a horrible putt at the third for a bogey. At one point, he was a massive 10 shots back from the lead, which is an incomprehensible margin just a couple hours into a tournament for such a talent.

We’ve seen McIlroy blow up early and then slowly creep his way up leaderboards for the backdoor top 10. That’s certainly still in play this week, where the weather can turn and wipe out entire chunks of the field based on nothing more than where they slotted on the tee sheet. But a top 10 is far different from the home win, which was the dream.

McIlroy maintained this week that he was competing as if this were a normal Open but that he was also going to “smell the roses,” as he said, appreciating the fact that this was being held in Northern Ireland again. He was operating on dual tracks this week. They weren’t necessarily in conflict, but he may only get two rounds to look around and smell the roses.

Here is a sentence I did not expect to type when the first round started at 1:30 a.m. ET: It was an absolute joy to watch Darren Clarke play golf in the middle of the night on Thursday. I’m not just referring to the sentimental stuff, like the Senior Tour eligible player getting the honor of hitting the first tee shot in front of the home fans. That stuff was cool. But he was hitting some fantastic golf shots with long iron approaches into some of these repelling Portrush greens, even into the back nine as he came down to earth and finished even-par.

He was more than a ceremonial golfer, opening with birdie and making three in his first five holes to take the lead while sucking down lung darts almost one hole at a time.

love a sport where the guy given the honor of hitting the first tee shot at a major is ripping through smokes before 7 am local time pic.twitter.com/LdY9n2ZqlK

He was amusing, emotional, and awesome to watch actually play shots, real golf shots, into a course he knows so well.

When OB is OK

McIlroy probably disagrees, but the masochist in me loves the out-of-bounds on the first hole. It’s not a brutal opener — you can bunt a driving iron out there and make a comfortable par. But the white stakes are out there on both sides of the fairway just making things a little edgy in a setting where the best in the world are anxious to get started.

We’re getting a variety of scores at the first hole, too. Clarke, who had to hit driver, rolled in a birdie putt. Andy Sullivan was the first to go OB. Connor Syme holed out from the fairway. There was a the McIlroy debacle. And there were a bunch of safe driving irons and boring pars. Out-of-bounds, especially when it’s not technically a property boundary anymore, is controversial. But I’ve enjoyed the touch of tension it’s brought to the very first hole.

The old and new

It was a blast to watch players go for the par-4 5th green with driver and have the tracer technology there to cover it. The hole is measured officially at 376 yards but it’s downhill and had a helping wind that prompted Golf Channel’s Justin Leonard to say, “This is just a long par-3 right now.” Shane Lowry nearly hit the flagstick and Branden Grace came close just moments later.

If you overdo it on an approach, there’s out of bounds directly off the back of the green, which abuts a cliff that falls into the beach and ocean. The wind may change and make driver the wrong play. Stewart Cink remarked on Wednesday that he was hitting full 5-irons into a hole where he had a half-wedge on Tuesday. We all know and appreciate these changes as the beauty of links golf and a staple of The Open.

But early in the first round, it was driver at the 5th and it was awesome to watch. We had graphics and tools giving us real-time wind information, overhead hole layouts, and then the tracer allowing us to follow the ball flight all the way into a green jammed up against the cliff.

It was the best mix of old and new — tee shot strategy on an ancient links course with modern technology making it beautiful to watch.

The proper kind of ace

Every hole-in-one is great, but I think the most satisfying has to be the one that rolls in gently on one of the ball’s last few revolutions. Aesthetically, it’s beautiful but it also gives you more time to anticipate the possibility and hope.

The first ACE of the week at #TheOpen comes from @GrilloEmiliano at the 13th hole pic.twitter.com/0chk8JDHMl

2 thoughts on “While you were sleeping at The Open: Rory’s nightmare, Clarke’s smoking start, and a perfect ace”