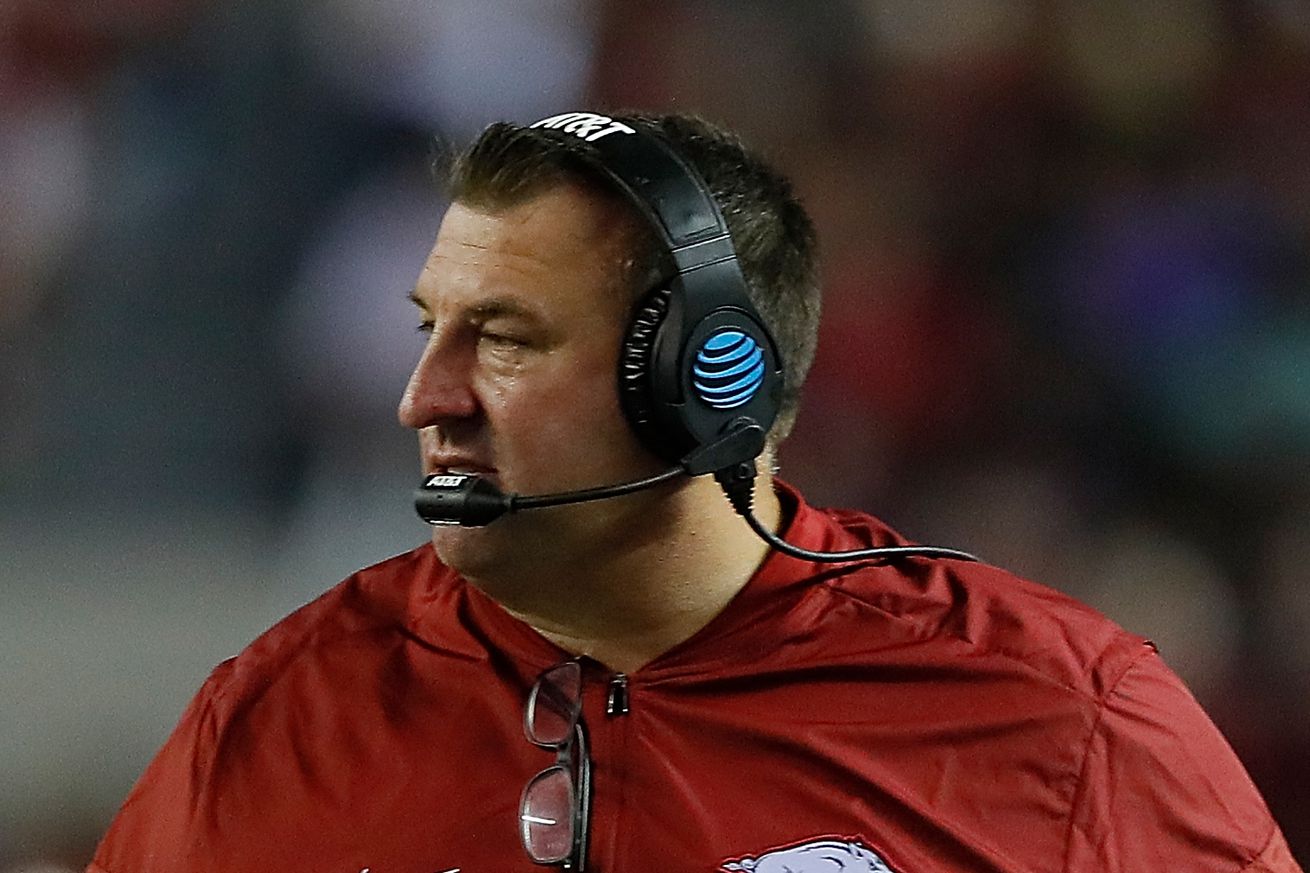 His peers in the SEC see the reasoning, both for him and whichever team might add him to its staff.

Rookie New England Patriots consultant and former Arkansas and Wisconsin head coach Bret Bielema has been, per reports (per Bret Bielema), set to become the next defensive coordinator of the Super Bowl champion Patriots.

Or maybe it’s Greg Schiano, and Bielema could be headed to the Miami Dolphins.

We’re not sure at the moment.

Whichever staff he might end up on, Bielema is very happy in the NFL.

Throughout the 2018 college coaching cycle, Bielema’s name circulated, but not with much momentum. Multiple college coaches I spoke with believe that Bielema would come back to an ideal situation — taking over at his alma mater Iowa if Kirk Ferentz retired — but that he’s focused on rebranding his career as a pro coach.

“And we’re talking about the Patriots. This is the ex-head-guy-to-Alabama-assistant job for the NFL,” he said, comparing Bielema’s potential career path to Belichick associate Nick Saban’s knack for hiring fired head coaches and turning them into coordinators.

Bielema’s college experience has ended up helping him become a modern NFL candidate.

Multiple college coaches told SB Nation that NFL coaches have been aggressively scouting how college defenses prepare for run-pass option plays, and the assumption among college coaches is that if their offense continues to influence the league, it’s likely some of their defensive solutions will as well. Theoretically, that could push a college defensive coach like Bielema into demand.

“One thing to remember about Bret is that it didn’t go the way Wisconsin thought [Bielema leaving for Arkansas], but Barry Alvarez still picked him [to become head coach of the Badgers],” said a former SEC head coach.

“Among defensive coaches, he stands out. He’s an incredibly smart defensive mind and he was always respected in the [SEC] for his football knowledge. He was probably never going to make it as a head coach responsible for head coach things, but he knows his ball. Guys like that tend to do well in the NFL.”

Bielema’s hard-nosed Wisconsin reputation and his background as a DC never translated during his time at Arkansas (his Razorback defenses finished below 60th in Defensive S&P+ four times in five seasons, including 112th in 2017).

But Bielema is also regarded as a player’s coach, something else increasingly valued by the NFL.

While the Hogs never approached Bobby Petrino’s success on the field under Bielema, he’s credited among coaches for undoing negative relationships and what one career SEC assistant called “just an absolutely terrible culture” throughout the program.

“There’s a theory in college coaching right now about what makes Sean McVay so successful. It’s not that he’s a mastermind. That offense isn’t anything revolutionary. Most of it looks a lot like Kyle Shanahan’s.

“What a lot of us think, based on what we’ve heard, is that McVay has brought a different kind of relationship culture to those players, what people would consider to be more college. More emphasis on the emotional relationships. Rallying guys. Getting them to play hard, play with emotions where you wouldn’t expect that kind of energy from professionals.

“And if that’s the case, I think a guy like Bret fits in perfectly on the other side of the ball. So maybe it’s Bill realizing that there’s a change in the player dynamic with younger guys.”

He’s developed a strong relationship with Bill Belichick, because opposites clearly attract. Wait, are they even opposites?

“I wouldn’t say they’re complete opposites,” said the former SEC coach, who’s faced Bielema before. “I think the media tries too hard to create characters of these guys. They’re both football coaches. They both love ball.”

Several coaches I spoke to compared Belichick’s out-of-the-spotlight personality and behavior to that of Bob Stoops, a coach notorious for combative and short interactions with media but incredibly liked among coaches.

“Bill’s not the guy under the hood if the cameras aren’t on, and never to other coaches. And Bret’s reputation was always looser than a SEC coach — walking around in sandals with a sunburn, out drinking beer — but he worked his ass off as a coach.”