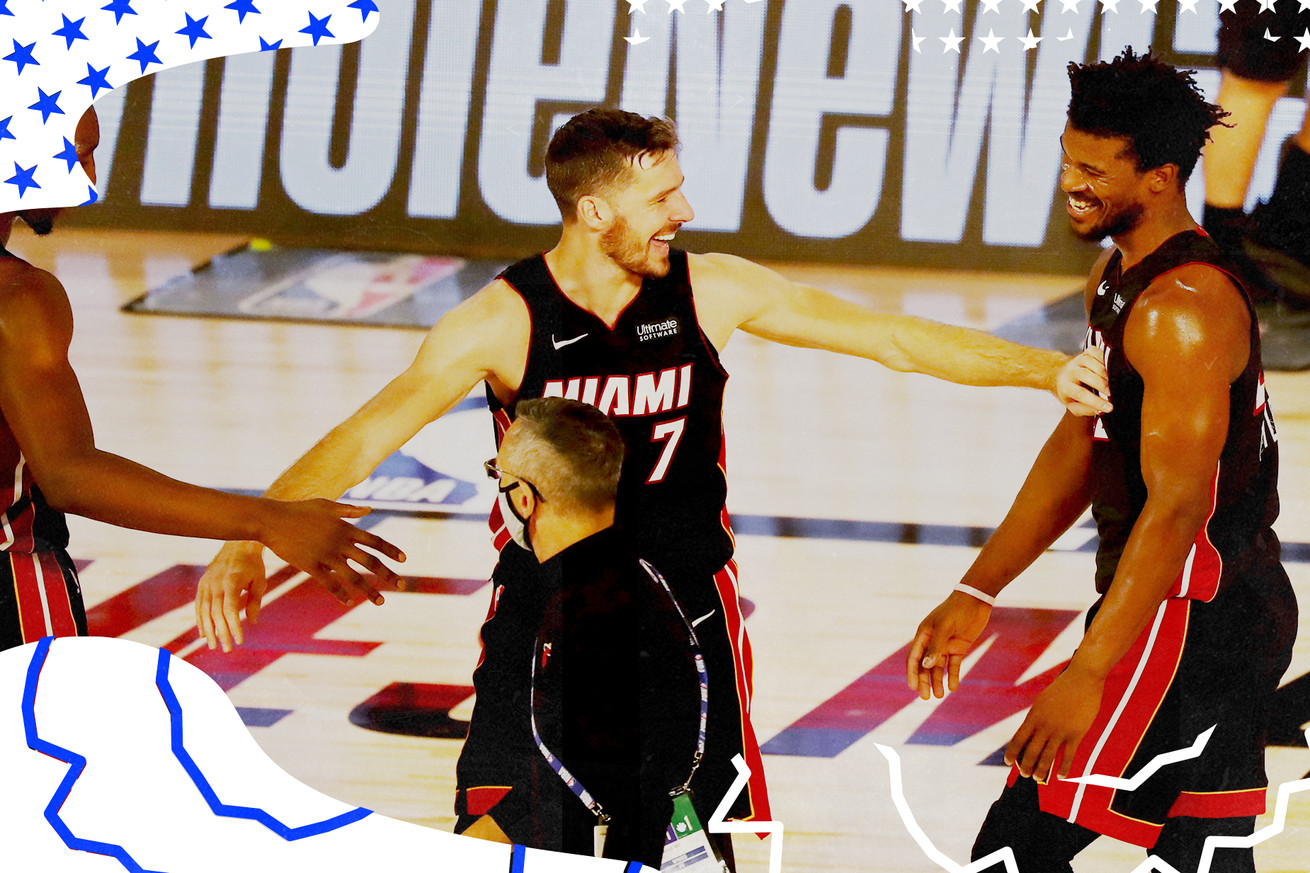 The Heat’s performance in the bubble is no fluke.

The Miami Heat had already exceeded every reasonable expectation when they arrived at Disney for the season restart in the bubble. A year after missing the playoffs in the East, the Heat were now fourth in the conference standings and top-10 in the league in net rating. Miami’s offense was a tenth of a point from being top-five in efficiency, and the defense remained in the top half of the league despite a mid-season makeover.

The Heat had acquired a star creator in Jimmy Butler when they agreed to a deal in free agency and landed him in a sign-and-trade. They had found two gems in the middle of the draft in Bam Adebayo and Tyler Herro — selected at picks No. 13 and No. 14, respectively — with the former becoming an All-Star for the first time this season and the latter tracking as possible one soon. Duncan Robinson and Kendrick Nunn were undrafted free agents who became key rotation pieces. The Heat gained additional reinforcements by swapping Justise Winslow for Jae Crowder and Andre Iguodala ahead of the trade deadline.

There were rumors Miami was poised to land even more talent. There were pre-season rumblings of a possible Chris Paul trade, and mid-season rumors the Heat had a deal for Danilo Gallinari before it fell apart during negotiations on a contract extension. From the outside, it felt like the Heat were still one piece away. If few thought Miami was a legitimate contender to come out of the East, mostly everyone agreed their season was already a success and their future should only be brighter.

The Heat didn’t start off as a dominant team in the bubble, at least not in the early days. Miami went 3-5 in seeding games as they weathered injuries from Butler and Goran Dragic. They even got passed by the Indiana Pacers for the No. 4 seed. But when the games started to count for real in the playoffs, Miami quickly proved they weren’t just a feel-good story — they were a legitimate powerhouse.

The Heat have bursted into the NBA Finals against the Los Angeles Lakers as the most shocking conference champion in recent memory. It’s not just that Miami made it to the doorstep of a title; it’s how dominant they’ve looked doing it. The Heat have had a specific game plan for every opponent, going from switching defense against the Pacers in round one, to the ‘build a wall’ plan to slow down Giannis Antetokounmpo in round two, to a hybrid 2-3 zone in the conference finals to beat the Celtics.

The Heat’s 12-3 record in the playoffs speaks for itself. Outside of a few 50/50 plays that went their way (notably, Adebayo’s game-saving block on a Jayson Tatum dunk to swing the series opener of the conference finals), there’s nothing all that flukey about this run. In the bubble, the Heat have been as convincing as their postseason record suggests.

How have the Heat gone from very good to great in the playoffs? It just feels like Miami is the perfect team for the bubble. Here’s why.

Miami arrived in the bubble on July 7, about three weeks before the seeding games started. That means the Heat will have been together in Disney for 85 days before the Finals tip-off, without any contact from the outside world and with the presence of select friends and family only recently.

While being locked away from reality took a serious toll on lesser teams, the Heat have somehow thrived in such a difficult environment. It certainly helps that the entire team seems to get along really well.

There’s no doubt that Butler is the catalyst off the court, just as he has been on it. After being considered a malcontent in his previous three NBA stops, Butler now looks like something completely different: one of the NBA’s best leaders. His start-up coffee company has been one of the great stories of the bubble, and it feels like it’s only brought the team closer together.

So apparently Jimmy Butler wasn’t kidding about the up-charge for the use of his French Press at Disney. (From Meyers Leonard’s Twitter): pic.twitter.com/1s1em6flRG

Butler appears to have a tight relationship with every key member of the Heat. His hijinks with Goran Dragic have been a running theme throughout the bubble:

Butler has been vocal about his love for Herro since the rookie was drafted. He even showed up with his high school jersey on after his breakout Game 4 against the Celtics:

Another jersey added to @JimmyButler’s collection.

Meyers Leonard is another example of the Heat’s elite team chemistry. Leonard started at center for the Heat in 49 of the 51 games he played in, but has been pulled out of the rotation completely in the bubble. Instead, Leonard is seen loudly cheering on his teammates from the bench every game. He’s handled his demotion with nothing but grace as the team has been humming with smaller lineups.

Being trapped in Florida for three months with your co-workers you don’t really like? Sounds terrible. Being there with your friends? Not so bad. The Heat have excellent camaraderie, and it feels like one of the secrets to their success.

The Heat keep their players in elite shape

Miami’s intense dedication to conditioning is renowned around the league. James Johnson once went from 275 pounds with 14.5 percent body fat to 238 pounds and 6.75 percent body fat midway through his first season with the organization. Dion Waiters had a similar body transformation.

Unless it’s Dwyane Wade in his golden years, no one is above the Heat’s rigorous cardio standards, not even Butler. ESPN’s Brian Windhorst wrote about Butler failing the Heat’s signature conditioning test when he first arrived in Miami.

For the first several rounds, Butler was flying through the drill. But by the fifth round, his back stiffened; he’d gone too hard. When it was over, Butler had failed.

The Heat are more demanding than any team that their players be in top shape. They’re seeing the results of that in the bubble.

The Heat’s net rating by quarter over the last two rounds against Milwaukee and Boston:

The Heat punched their ticket to the Finals with a 30-17 run over the last eight minutes of Game 6 against the Celtics. They’ve crawled out of big second half deficits throughout the playoffs, and it isn’t a coincidence.

This is Miami’s conditioning paying off.

Miami is peaking at the right time

The NBA was on hiatus for nearly five months because of the coronavirus pandemic. The Heat went from March 11 to Aug. 1 without playing any games, but it sure feels like they used their time to get better.

Herro is an obvious example. The rookie guard’s numbers are way up across the board in the playoffs from the regular season.

There’s also the fact that the Heat added Crowder and Iguodala on Feb. 6. In a normal season, both players would have had less than two months to acclimate themselves with their new team before the playoffs. With the hiatus, they had 6.5 months to prepare for the postseason with Miami.

There’s also the fact that, as a No. 5 seed, the Heat never had to overcome their lack of homecourt advantage. In the regular season, Miami went 29-7 at home, and 15-22 on the road.

The Heat have been so convincing in the bubble that it’s unfair to say this Finals run wouldn’t have happened in a normal playoff format. If anything, the Heat’s performance while locked away in Disney makes what they’re doing even more impressive. While other teams cracked in the bubble, Miami has thrived. They really are built for this.