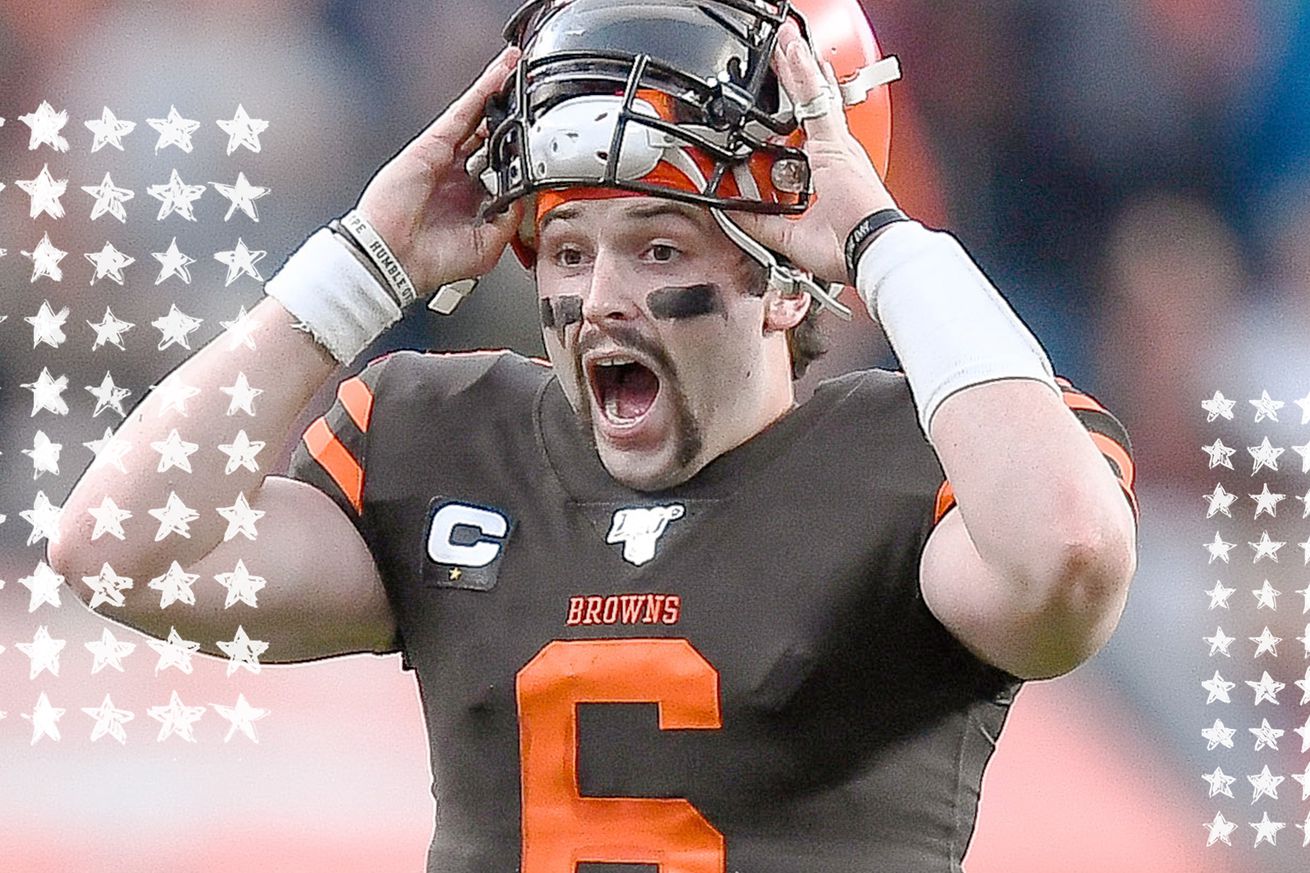 Baker Mayfield and the Browns have had a rough 2019 season.

Most of us had high expectations for Cleveland in 2019. Most of us were fools.

One look at the Cleveland Browns, and it’s easy to see why they’re not winning. The offense isn’t working at all as they try and move away from being a power running team to one that feeds Odell Beckham Jr. and forces Baker Mayfield to win games with his arm.

There are some real problems on defense, too. The Browns are allowing 25.6 points per game, 141.3 rushing yards per game, and have only managed to force nine turnovers — all of which rank in the bottom third of the league.

And while they’re a mess on the field, there are concerns off the field as well. Mayfield has been getting into it with reporters. Beckham keeps getting fined, and safety Jermaine Whitehead was released after some controversial tweets. Individually, these incidents may not create a narrative. Together, it suggests first-time head coach Freddie Kitchens is in over his head managing all of this.

This type of dysfunction is nothing new from the Browns. They’ve been an NFL punching bag for most of their existence, especially since the franchise returned in 1999. In the two decades since, they’ve made it to the playoffs just once: in 2002, which ended in a wild card exit.

Yet many of us thought this year would be different. They opened the season tied for the eighth-best odds to win the Super Bowl (alongside the Packers and Cowboys!) and NFL fans were clearly buying into the hype.

Why did we fool ourselves into believing in another reality for the 2019 Browns? Why were we so hasty to ignore the warning signs? Let’s dive into it.

It was easy to overlook Kitchens’ inexperience

Cleveland has had so much instability over the years — the team is currently on its seventh head coach this decade. That made it easier to believe it was a good idea to retain Kitchens, an interim offensive coordinator without a full season of coordinating or any head coaching experience under his belt. The players liked him, which counted for a lot, especially in the wake of the Hue Jackson era.

Before the season, SB Nation’s Geoff Schwartz warned us about the unrealistic expectations being placed on Kitchens, and he was right on the money.

Kitchens might be well equipped to handle every situation, or just some of them. He’s going to be learning on the fly. But, unlike other first-year head coaches, if Kitchens makes a mistake that leads to a loss, or if there’s too much drama, or if the Browns don’t make the playoffs, this season will be a failure. That’s a big weight for a first-time head coach!

Unfortunately, things haven’t been good under Kitchens. The Browns might mostly be defined by their lack of discipline. They have had 17 giveaways, third-worst in the league, and have a turnover differential of minus-8. They have been called for 75 penalties in 2019, the most in the league.

If that wasn’t enough, Kitchens has drawn the fans’ ire for several mistakes in game management and playcalling. You can point to most Browns games this season and find a pretty glaring error he’s made, and most of the time, Cleveland was still in the game when it happened.

In a Week 3 loss to the Rams, the Browns saw multiple red zone opportunities evaporate as they tried to force passes to Beckham and Jarvis Landry, despite strong play from the offensive line and Nick Chubb. They scored once in four red zone trips, a crucial failure in a game they only lost by a score of 20-13. Kitchens admitted after that game that he was still learning how to call plays, even though he had done it (successfully) in the second part of 2018.

Three weeks later, a near-touchdown to Landry in the fourth quarter against the Seahawks showed Kitchens’ inexperience. Kitchens eventually challenged the call, but first, the ball was snapped and Chubb ran it on fourth-and-goal. The play didn’t count, and Kitchens lost his challenge. So what did Kitchens do? He called the exact same run to Chubb that he had just shown the Seahawks. It didn’t work, and the Browns lost 32-28.

Then in a surprisingly competitive Week 8 game against the Patriots (at least initially), Kitchens made his most egregious mistake yet:

So the Browns went for it from their own 19-yard line, on a fourth-and-16 attempt, which apparently was his plan all along. They failed, as expected.

In hindsight, it was unreasonable to expect Kitchens to be able to turn things around so quickly, though I think at this point, he’s doing worse than even the doubters expected. The Browns, at 2-6 on the season, are no better off in the standings than when they fired Jackson at 2-5-1 last year.

While Kitchens has emphasized that the Browns simply need to execute better, it falls on the coach to put his team in position to do that. So far, he hasn’t.

The talent was — and is — there on paper

When the Browns made the move to acquire Beckham, it was clear they wanted to win now. That’s an aggressiveness we hadn’t seen from them in a long time. Looking at their roster heading into the season, there was a lot of talent to get excited about.

Let’s start with the quarterback. Mayfield threw eight touchdowns before Jackson and OC Todd Haley were fired last season. But in the final eight games of 2018, he threw for another 19 for a total of 27 touchdowns, setting and NFL rookie record and surpassing the likes of Peyton Manning and Russell Wilson.

He threw fewer interceptions than he did in the first half of the season and seemed to flourish with Kitchens running the offense. Once Jackson was gone, Mayfield began to thrive in a way that had the No. 1 pick looking like a franchise quarterback.

And he had the offensive pieces to excel in his second year.

Landry made the Pro Bowl with Mayfield throwing passes, but what he really needed was another receiver to take some of the load off him. Beckham, aside from making circus catches that dominate the highlight reel, is a production machine whose addition was expected to boost for Landry.

Then there’s the running game, led by an emerging Chubb. As a rookie alongside Mayfield, Chubb rushed for 996 yards and eight touchdowns. He’s been even better this season, too.

Instead of all of those offensive pieces coming together, though, Mayfield has regressed. That’s not all on Kitchens. Mayfield is clearly forcing passes and he’s been extremely predictable outside the pocket, always rolling out to his right and focusing in on a single receiver — notably, on a fourth-and-4 play against the Broncos with the game on the line:

Baker went across the middle to Landry with two defenders instead. Ouch. pic.twitter.com/bB0zlW3tgV

He’s thrown just seven touchdowns against 12 interceptions, and his passer rating has dropped from 93.7 as a rookie to 71.3 this season. He’s also become a meme.

Combining his sophomore slump with Kitchens’ playcalling errors, the coach-quarterback combination has floundered.

Defensively, the Browns have a deep, young core that should be far better than it is. Pass rusher Myles Garrett, another first overall draft pick, is the star of the unit. Garrett is one of the more complete defensive ends in the league, and has 30.5 sacks in 35 career games.

This offseason, the Browns added veterans Sheldon Richardson and Olivier Vernon to the defensive line. Vernon had seven sacks in 11 games with the Giants in 2018, and pairing him with Garrett was expected to result in fireworks. That hasn’t gone as planned, either.

While Garrett has amassed 10 sacks, he is one of the most-penalized players in the league. Vernon has only registered three sacks so far. Richardson has also struggled against the run, and the defensive line hasn’t made big plays when it needs to. Instead, Cleveland has allowed the five-most explosive running plays in the league, per Sharp Football.

Two highly drafted cornerbacks, Denzel Ward and Greedy Williams, lead the secondary. Despite being banged up there, it’s one area where the Browns haven’t disappointed too much, allowing just 216.3 passing yards per game, sixth-best in the league. However, they’re merely average when it comes to explosive pass plays allowed.

This team is loaded with playmakers. The fact that they aren’t executing — and in the case of Mayfield, regressing — is another black mark on Kitchens’ record.

Let’s get this out of the way: schadenfreude is a favorite pastime of sports fans, to a fault.

I don’t like people getting fired or hurt, but when the team owner tries to overhaul the way NFL front offices work while dealing with multiple criminal investigations, well … maybe it’s OK to laugh when the on-field product resembles a dumpster fire made out of turds?

Pretty much everybody interested in the NFL, including Browns fans, has enjoyed a joke at the team’s expense over the years. I’ve certainly had my share. But I, like many, was fully on board with the concept of the Browns being good again. The humor can only last so long before the situation just becomes sad.

It’s also our natural tendency to root for the underdogs. The Browns being good again would have been endearing, in the exact same way that the Patriots missing the Super Bowl would be cathartic. Things have been soul-crushingly bad for the Browns for so long, that seeing them succeed would do a lot for my cynical and frosted-over heart.

The Browns having a reason to cheer for the first time in literal decades would be a strike against the status quo. The shittiness of the Browns represents the shittiness of the world, and it’s nice to be able to forget about the latter by rooting for something positive happening to Cleveland.

But when the Browns suck and the Patriots are still stupidly good, it feels like nothing ever changes.

Sadly, the Browns are getting in their own way the same they have for a long time. I still feel for Browns fans, but at this point, there are no easy fixes. The team will either have to stick with Kitchens, who doesn’t inspire confidence, or move on and face more uncertainty in another offseason filled with change.