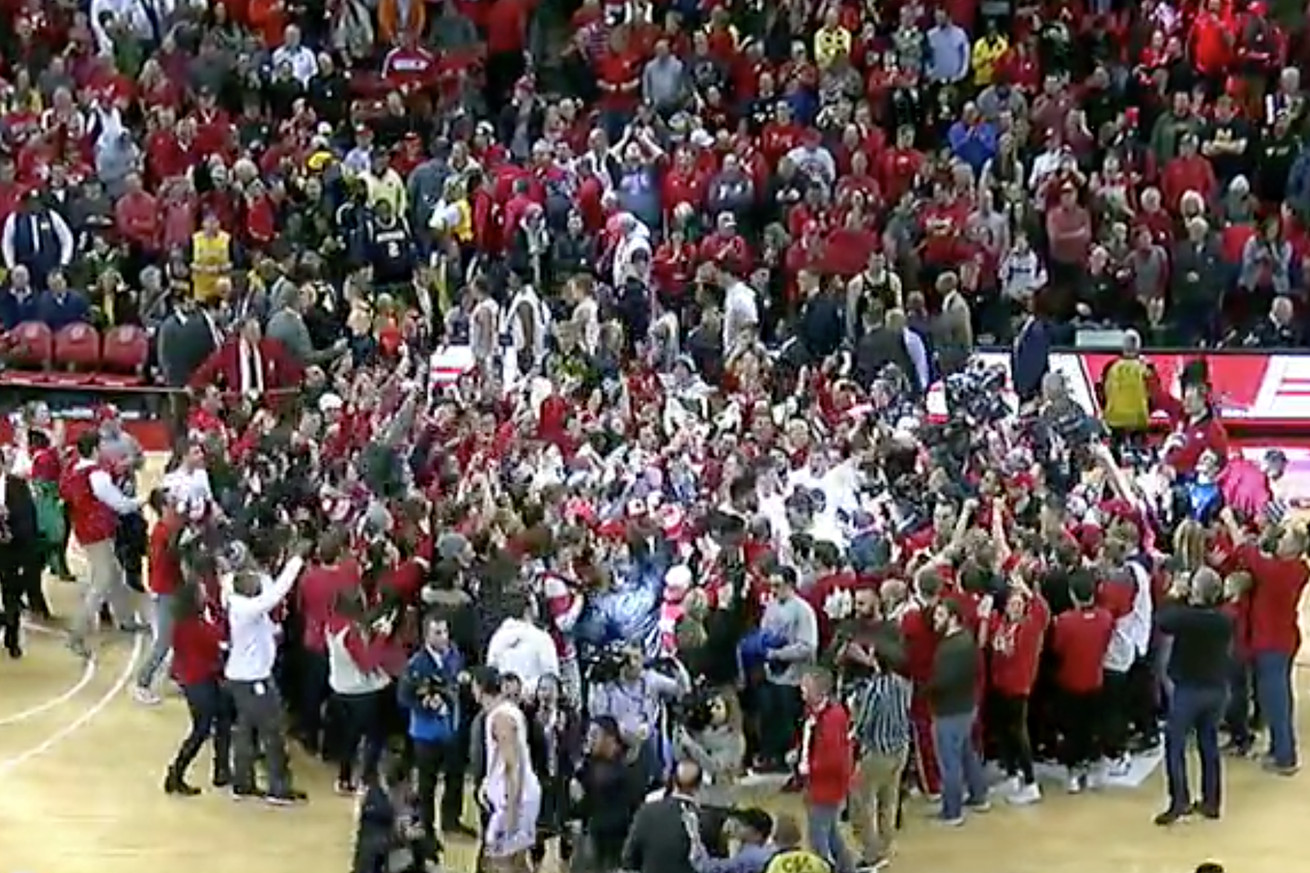 Michigan’s run at perfection came to an end and Wisconsin’s up-and-down season found some stability.

With a 64-54 loss at Wisconsin Saturday afternoon, second-ranked Michigan fell from the ranks of the unbeaten, leaving No. 4 Virginia as the only unblemished team remaining in college basketball. The Wolverines’ 17-0 start had been the best in program history.

Here are five thoughts on the afternoon that was in Madison.

After a breakout sophomore season where he averaged 14 points and nine rebounds per game, Ethan Happ received a fairly significant amount of preseason national Player of the Year buzz before the start of the 2017-18 campaign. Most of Happ’s numbers improved during his junior year, but Wisconsin struggled mightily, and as a result most of the country seemed to forget about the Badger big man.

Despite posting some seriously gaudy numbers and currently sitting at No. 2 in Ken Pomeroy’s Player of the Year rankings, Happ hasn’t received the amount of midseason All-American love that you might expect. That’s likely to change after a performance against Michigan where he was clearly the best player on the floor.

In the win over the Wolverines, Happ posted a game-high 26 points, snagged a game-high 10 rebounds, and dished out a game-high seven assists. He also notched two steals, which both game when Michigan was mounting a comeback in the game’s final minutes.

Earlier this season, Happ became just the seventh player in Big Ten history, and the first since Indiana’s Alan Henderson in 1995, to accumulate 1,800 career points and 1,000 rebounds. Happ’s career accomplishments are staggering, and he’s never been better than he’s been these last few months. After Saturday, the big man deserves to be in the thick of the conversation for both Big Ten Player of the Year and First Team All-American.

One of the biggest surprises in college basketball this season has been the sterling play of Michigan freshman Ignas “Iggy” Brazdeikis. The versatile 6’7 forward has been lighting up opponents all season, and heading into the weekend had been held to single digits in scoring just twice.

Wisconsin’s tough man-to-man defense and its bulky, physical forwards frustrated Brazdeikis all afternoon, holding the Lithuanian-born star to zero points on 0-for-5 shooting from the field. Brazdeikis was also held without an assist for just the sixth time in 18 games.

Michigan struggled to compensate for Brazdeikis failing to put up anything resembling his typical contribution. Jordan Poole scored 14 points, but it took him 15 shots to get there and his decision-making seemed to frustrate John Beilein all afternoon. Second leading scorer Charles Matthews attempted just five shots and scored only five points. Zavier Simpson was the only Michigan player who finished the game with more assists (6) than turnovers (3).

At Michigan, John Beilein has been tremendous in Big Ten play against pretty much every team outside of Wisconsin. After Saturday’s loss, Beilein is now just 5-17 against the Badgers since arriving at Michigan in 2007.

It’s not just a Beilein thing though. Inside the Kohl Center, Wisconsin is now 14-3 against Michigan.

The win marked the ninth time in the last 10 years that Wisconsin has defeated a top 10 opponent inside the Kohl Center. The Badgers have been especially tough against top-tier opponents under Greg Gard. In his four years at the helm, Wisky has now knocked off seven top 10 opponents, and four teams that have been ranked in the top five.

The Badgers Have Their Signature Win, Michigan’s Still Fine

It’s been an up-and-down 2018-19 for Wisconsin, which was ranked as high as No. 12 in the AP poll back in December, but entered Saturday feeling like it might be on the wrong side of the still-developing NCAA tournament bubble. The Badgers have lost six times — including an ugly road loss at Western Kentucky — but they now own a victory over the team which currently sits at No. 2 in the NET rankings. Toss in quality wins over NC State and Oklahoma, and Gard’s team has a resume that should hold up really well over the next eight weeks.

For Michigan, Saturday marked the first time this season that the Wolverines have appeared to rattle. The ball didn’t move the way it typically does, shots were forced in key moments, and defensive breakdowns, especially inside, occurred far too often.

Still, given its body of work over the previous two months, it’s difficult to see Michigan’s performance in Madison as anything more than an outlier. The Wolverines are still right there with Michigan State as the teams to beat in the Big Ten. And, assuming Beilien’s team returns to form as you’d expect, should still right be in the heart of the No. 1 seed discussion from now until Selection Sunday. After all, this is a Michigan team whose only other loss since Feb. 6 of 2018 was against Villanova in last year’s national title game.