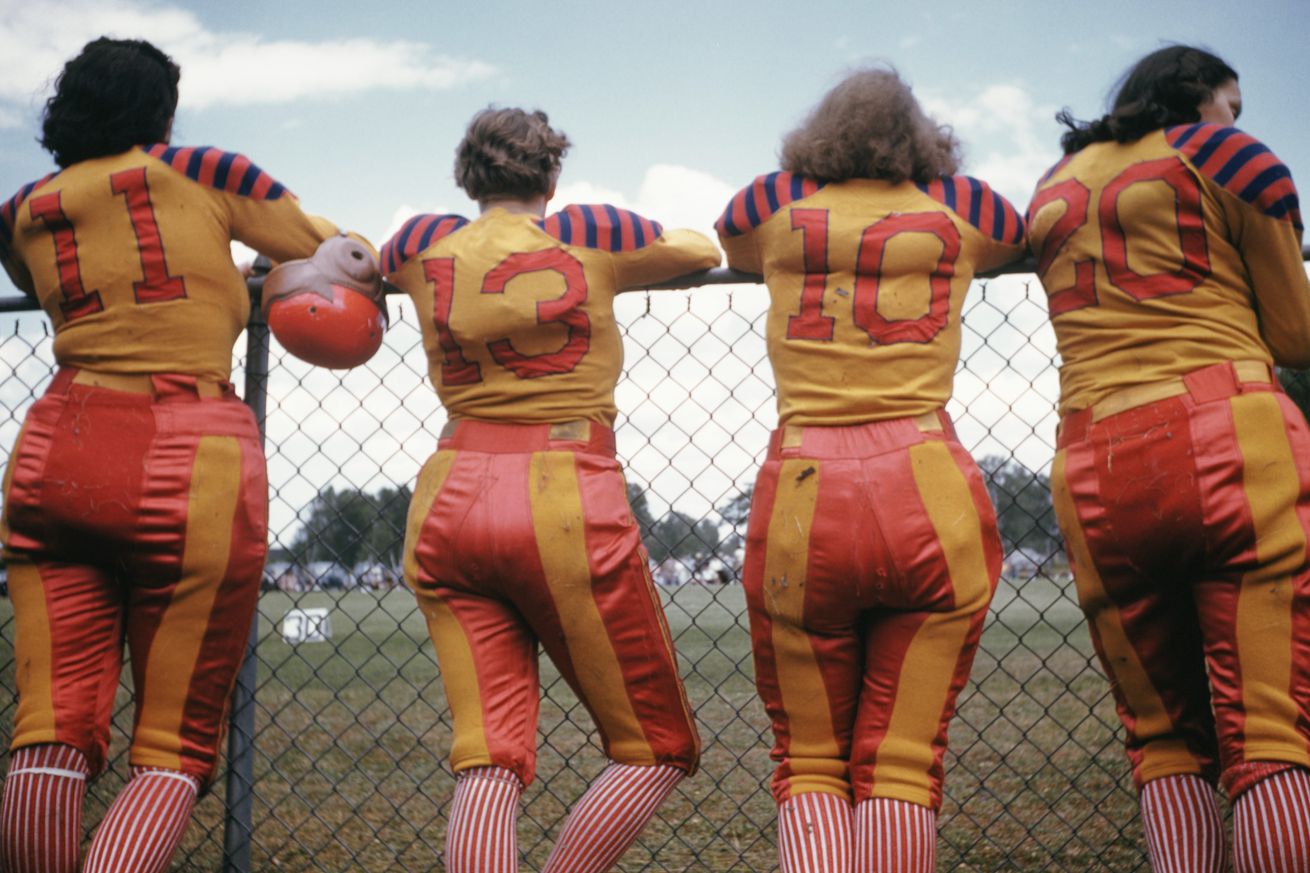 “A fortnight ago in Los Angeles, those romantics who still believe in nursery rhymes and the dignity of womanhood got a rude shock,” LIFE Magazine brayed in a November 1939 issue. The shock in question came from a new Southern Californian league of what papers around the country had taken to calling “girl gridders”: women playing tackle football, apparently without sugar, spice and everything nice. In the case of the Stars, the Amazons and the Rinky Dinks (really), they were playing in front of thousands.

Take halfback Shirley Payne of the Stars, who had made her name outrunning Mickey Rooney (yes, that Mickey Rooney) during a 1938 halftime exhibition game against his team, the MGM Wildcats; that co-ed matchup was billed as groundbreaking. Or the Amazons’ Lois Roberts, who punted 50 yards barefoot.

“Strangely enough, they played good football,” wrote a man (probably) in the same spread, still concluding that “it would be better for girls to stick to swimming, tennis and softball.”

Members of that league, which also became the topic of a widely distributed newsreel, were just the most visible members of a rapidly growing class of female football players.

Alabama’s Luverne Wise got an honorable mention for the all-state team for her performance at kicker and quarterback; her senior year, she said her dream was to “get a job coaching a girls’ football team.” Esther Burnham, a 14-year-old, played center for her Connecticut high school team — when a local paper asked why, she explained she did it “for excitement.” Seventeen-year-old Texan Juanita McCrury was kicking extra points for her high school. Sacramento’s junior college organized a women’s team. 1938 John Barrymore vehicle Hold That Coed even featured a “girl gridder” played by comedian Joan Davis. Her punchline? “Let me take the ball — no Southern gentleman would think of tackling a lady!”

Judging by the breathless coverage around these examples (examples that almost certainly represent only a fraction of the total number of girls and women playing), girls’ enthusiasm for football was still clearly deemed unusual. But it was also having enough of an impact that institutions around the country were taking measures to keep girls off the gridiron — or at least from playing the same game the boys were.

Spalding tried to divert the interest of potential women football players (and open up a new revenue stream) by distributing a pamphlet of rules for “American Football For Women” in late 1939, “a safe game for all classes of women to play because there is no tackling or blocking or any other feature permitted that would be injurious to them.”

It was essentially two-hand touch, the kind had already been adapted for “powderpuff” games around the country (like one 1940 matchup at the University of South Carolina for which each participating co-ed’s phone number was listed in the program). If you made intentional contact, there was a 25 yard penalty; there were no kick-offs, and you weren’t allowed to catch punts. Each drive automatically started on the 40 yard line — a bigger handicap than was included in the touch rules Spalding released simultaneously as a safer alternative for young boys. Be sure to buy those “official women’s football breast protectors,” though!

Despite the fact this version of football was about as innocuous as a game of badminton, the editors of Youth Leaders Digest — an industry publication that counted executives from parks departments, Boys and Girls Clubs, the YMCA, Boy Scouts and more among its contributing editors — were concerned. (Perhaps they hadn’t read the rules themselves.) “Do you think ‘a kick in the stomach’ or a ‘blow on the breasts’ or maybe a short journey into the unconscious carries with it any type of character building our high school or college girls need?” they asked, quoting the LIFE feature.

It seemed like a rhetorical question, but apparently the editorial garnered an immediate and unusual response — mostly in staunch agreement with its disbelief that any girl or woman would ever even imagine playing football.

“Girls’ football is here — whether as a passing fad or permanent exploitation, no one yet knows,” wrote University of Michigan professor Elmer D. Mitchell in the Journal of Health and Physical Education. “But even if girls’ football is a passing fad, this editorial will have served some usefulness if it can hurry the idea along to a quick end … stop women’s football in every way you can! Do not give it a chance to grow!” His reasoning: if football is hard for men, it will be impossible for women; women don’t actually want to play; oh — and they’re ugly when they do.

From the director of health education for the YWCA: “We urge each one of you to protest in your communities the spread of such an insidious thing as this.” From the supervisor of physical education in New Jersey public schools: “‘Ridiculous’ is the word for it.” A New York doctor compared the LIFE spread to the fall of the Roman Empire. OSU coach Francis Schmidt: “No one in his right mind would propose such a thing.” The superintendent of the Los Angeles parks and recreation department — so, in the same city where women playing football were attracting massive publicity and thousands of fans — announced they would no longer permit the use of their facilities for girls’ football: “It is quite obvious that football (regardless of rules) is wholly unsuited to the physiological and anatomical limitations of girls.”

The head of the Bethlehem, Pennsylvania, parks and recreation department might have come the closest to getting the point, while also missing it completely: “I think the typical American girl today is a girl who is quite feminine, who has charm and poise and is really a woman. A mannish tomboy type of girl should not be set up as an example of American womanhood; and I do think that if our girls started playing football, there would probably be created a new type of women for our girls to emulate.”

“Under no circumstances would A.G. Spalding & Bros lower themselves in allowing … rules that even verged on the type of football that has had so much publicity,” replied a Spalding staffer. “We most heartily agree with your attitude in connection with a football game where women would have the clothes torn off of them [Ed. Note: ???], or would be subjected to various forms of injury; even the viewing of such a game would be unsightly.”

But it was too late: Spalding’s rules, as combined with the images presented in the LIFE spread, provoked vehement rejection of the mere idea of women playing football, and subsequent bans for girls in football across the country — many by statewide school athletic associations. Pennsylvania and Texas were among the first to legislate girls’ participation; as girls kept trying to play — despite the renewed resistance they faced as a result of gaining the tiniest foothold in the sport — new mandates kept being put in place to stop them.

A Massachusetts girl named Myrtle Chick kept showing up to her high school football team’s practice, only to get turned away despite universal acknowledgement that she was one of the school’s best athletes, according to a 1941 Boston Globe feature. “The girls among Myrtle’s senior classmates are her staunchest supporters,” wrote the Globe. “‘She’ll show them if they’ll only give her a chance,’ say the young women.”

There had been women football players prior to those who rose to minor acclaim in the late 1930s, and there would be more after them. But the institutional rejection of women’s participation in football at this particular juncture illustrates an important point: women have only ever gotten banned from sports after first playing them. The idea that women are incapable of equal participation is only ever made explicit after they have … equally participated.

Even more stark is the fundamental contradiction of conventional narratives around women’s participation in sports, particularly the idea that as women play, they “open doors” for those who might come next — that all it takes is one brave soul to go “first,” and then the systemic sexism is cured. The relatively insignificant amount of success and visibility the women football players of the 1930s had earned actually provoked a stifling reaction and explicit mandates banning them from the sport — just about the furthest thing from a clear path for the next generation.

Obviously, not a great deal has changed for women in football since: players are still covered as local novelties in the exact same ways, and all-women teams are mostly ignored. Despite that, many women still channel the audacious spirit of early players like Chick. She told the Globe that since they wouldn’t let her play, she was going to try to form a girls’ team — and if she succeeded, had no qualms about “trying to book a game against those stuck-up boys.”