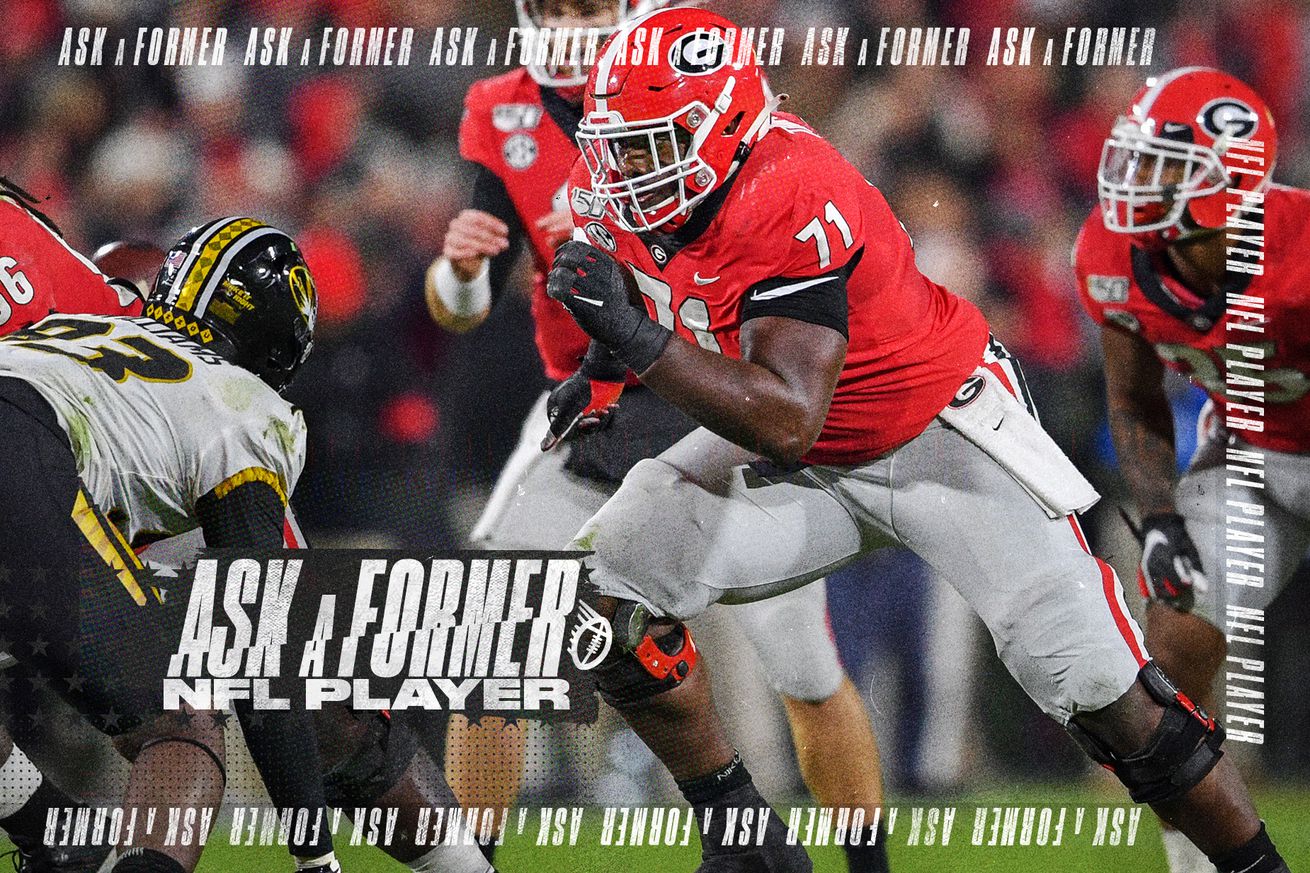 Andrew Thomas is one of the top OTs in a talented draft class.

In a draft-day mailbag, Geoff Schwartz weighs in on the latest trade rumors, as well as the best- and worst-case scenarios for Tua Tagovailoa and Justin Herbert.

Happy NFL Draft day! To celebrate, we moved the mailbag from Friday to Thursday to answer your final questions about this draft. No doubt, it’s going to be totally wild, and I can’t wait for it.

Be sure to follow along with us as we cover the draft this weekend and all the surprises it brings.

Why would the Dolphins move from No. 5 to No. 3 for an offensive tackle? — @bearsforfears

Great question. There are rumors the Dolphins want to trade from the fifth pick up to the third pick on Thursday night for an offensive tackle. Twitter tells me that player is Andrew Thomas. This rumor, like most of them, appears to be a smokescreen. But, smokescreens typically have a purpose, and I don’t see it here.

First off, trading up for an offensive tackle in a draft with plenty of them equally graded seems like a waste of resources. No offensive tackle is being drafted in the top three picks without a trade. The earliest would be the Giants at No. 4, if they don’t take Isaiah Simmons.

Are they trying to get the Giants to move up a single spot? I’m not sure why that benefits the Dolphins.

Could the Dolphins have leaked this to get the Chargers to pay more for moving up from No. 6 to No. 3 for a quarterback? I guess, but then the Dolphins aren’t likely to draft a quarterback in that case, as they wouldn’t get to choose between Tua Tagovailoa or Justin Herbert. So they’d draft a tackle at No. 5.

More likely, the Lions leaked this report to attempt to get someone to offer more for the third spot. But even then, no one believes the Dolphins would trade up for a tackle. Plus, draft trades go off a chart. It’s not like the Lions can say “well, the Dolphins get a better deal because it’s only for an offensive tackle, but we charge more for the Chargers because it’s a quarterback.” That pick is worth a certain amount of capital and when a team hits that with the right offer, they can get the pick if the Lions decide to trade out.

Considering the current coaching staffs and schemes, what will realistically be the best-case team and worst-case team scenarios for Tua Tagovailoa and Justin Herbert? — @EthanCryptos

The answer is the same for both. The best, if we are looking at the probable teams, is the Chargers over the Dolphins. The Chargers have supreme talent compared to the Dolphins. They have Hunter Henry, Keenan Allen, Mike Williams, Austin Ekeler, an upgraded offensive line, and proven coaches on offense. Any quarterback put into this scheme should excel.

The Dolphins don’t have the offensive line or the talent at receiver. Plus, their new offensive coordinator is Chan Gailey, who’s been out of the NFL for years.

Now that elite edge rushers line up on either side, has the value equaled for RT to LT? — @The_Jory14

Yes, basically. Teams now understand they need both a high-level left tackle AND right tackle. We’ve seen the salaries of right tackles almost match those at left tackle. However, I think the draft might not be the same.

That being said, Wills could be drafted to play right tackle for the Giants and that would be the right pick. We haven’t seen a right tackle taken this high since Lane Johnson in 2013 to the Eagles, and the thought was he’d always end up at left tackle. That just never happened.