Premier League games don’t come much bigger than Man City v Liverpool these days. We take a statistical-based look ahead to Sunday’s showdown.

Last week, this column reminisced about some memorable Manchester United v Arsenal games – a fixture which used to be must-watch.

Twenty years on from the era of dominance produced by those rivals, it’s now City v Liverpool which is the match you don’t want to miss.

The duo have been England’s top two for the past two seasons and most expect that will be the case again in 2020/21 – City currently head the title betting at 6/5 with Liverpool tucked in behind at 7/5.

The games between the sides therefore clearly carry big weight.

The fact City took four points from Liverpool in 2018/19 ultimately proved decisive in the title race that season – the 2-1 win at the Etihad perhaps best remembered for John Stones’ goalline clearance when only a tiny percentage of the ball failed to cross the line.

Still goalless at the Etihad after John Stones’ remarkable clearance off the line.

There have been other memorable contests in recent times.

The dominance of Liverpool at Anfield almost exactly one year ago laid the platform for their first title in 30 years. Then there was a similar masterclass by the Reds in the 2017/18 Champions League quarter-finals, a game which followed hot on the heels of a 4-3 classic in the league in L4.

Those 2017/18 defeats saw Pep Guardiola change his approach against Liverpool and Jurgen Klopp.

Previously he’d been happy for his team to play their possession-based football, relentlessly attacking, a tactic so successful against lesser sides.

But Klopp had the answers to that so most recently, City have often opted to sit off more than they would against other opponents.

Their possession stats have dropped markedly and in fact Liverpool have seen more of the ball in three of the sides’ last four meetings, including the two most recent at the Etihad Stadium.

It may be early days in the 2020/21 campaign but this is undoubtedly another massive game – particularly for City.

Liverpool will go eight points clear of Guardiola’s men if they win (albeit having played a game more) and they would undoubtedly regain title favouritism.

The Reds quickly put their 7-2 hammering at Aston Villa behind them to climb to the top of the table with even the serious injury to key defender Virgil van Dijk failing to derail them. They’ve won every game since losing the Dutchman.

City, on the other hand, have picked up only 11 points from their opening six games, their worst start under Guardiola. The last time they had fewer points at this stage was back in 2013/14. At least that season they went on to be crowned champions – it was the year of the famous Steven Gerrard slip.

The good news for City is that they’ve won seven of the last 10 Premier League games at the Etihad against Liverpool, who have mustered just the one win, a 4-1 success in November 2015.

Liverpool have failed to keep City out in any of those games and on their last visit in July were thrashed 4-0.

A game which delivers goals

Despite their strong record against Liverpool on home turf over the past decade, the timing of this match doesn’t look great for them.

With both Sergio Aguero and Gabriel Jesus having been laid low by injuries, they’ve managed to score only four goals in their last four league games with winger Ferran Torres being forced into the central striker’s role.

City rarely go long without scoring at least twice in a game – the last time they went five matches without doing so was back in 2009.

The worm may be turning on the injury front for Guardiola though with Jesus returning (and scoring) as a midweek substitute. However, he’s unlikely to be at his best given the lack of game-time of late.

That said, his presence would surely increase the chances of the goals trend in this fixture continuing.

Nine of those 10 aforementioned games have seen three or more goals, with four or more coming in five of the 10.

Both teams have scored in six of the last eight and that’s also been a strong trend for both sides this season – it’s occurred in six of Liverpool’s seven games and four of City’s six.

Liverpool have actually scored at least twice in every game so far this season, although notably they’ve often conceded first.

Their opponents have netted the opening goal in four of their seven matches so far but Liverpool have won three of those. Last season they won from behind on a league-high six occasions – there is plenty of steel in this Reds team.

Liverpool have actually conceded 10 first-half goals already this term and with City having only netted three times in the second half, there would appear to be potential for another comeback from Klopp’s team here.

To add weight to that argument, City lost 5-2 to Leicester in a game they led earlier in this campaign too.

Will Aguero return to haunt Liverpool?

It is not likely, but if he is declared fit, Aguero’s presence would worry Liverpool fans.

While he has famously failed to score at Anfield during his highly-successful career, his record at the Etihad in starkly contrasting. 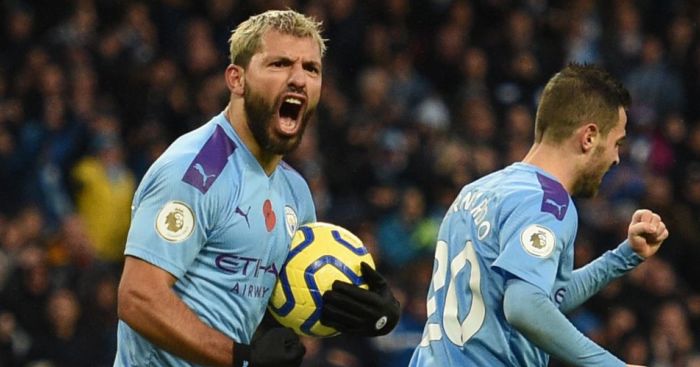 He’s faced the Reds here seven times in the league and scored on every occasion.

As for Liverpool, Mo Salah, who already has seven Premier League goals this season, has enjoyed plenty of success at the Etihad. He’s scored in four of his eight visits in all competitions.

Team-mate Roberto Firmino has netted in three of six appearances at City, although after Diogo Jota’s midweek hat-trick it’s far from certain that the Brazilian will start.

Sergio Aguero to score at any time – TBC

Roberto Firmino to score at any time – 3/1 (Paddy Power)

Pawson to keep the cards flowing

A good rivalry usually sets the pulse racing that little bit faster and the blood boils rather quicker than it normally would.

Since Guardiola arrived at City, eight of the 10 meetings between the sides have seen at least four cards.

With Craig Pawson the appointed referee, there’s every chance that statistic will grow.

Pawson averaged 3.74 yellow cards per game last season, a figure which made him the sixth-strictest in the top flight. After four games this term, he’s pretty much bang on that average having shown 15 yellows.

In terms of individuals, Bernardo Silva and Roberto Firmino have both found trouble in this fixture.

Silva has been booked in three of his four starts against Liverpool. Overall, he’s collected a card in five of his last 26 Premier League starts.

Firmino isn’t a player you associate with cards – indeed he rarely finds his way into a ref’s notebook – but it’s interesting to see that three of his last six cards have been shown in games against City.

As we’ve said, this means more.

Roberto Firmino to be booked – 9/2 (Betfair)

Same Game Multi: Both teams to score, Salah to score at any time and over 40 bookings points – 4.13/1 (Betfair)