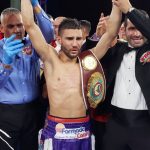 Mendez, 22, of Caguas, Puerto Rico had become the mandatory challenger in May when he won a split decision over Janiel Rivera.

Saludar, 28, of Polomolok, Philippines was without the services of his head trainer Michael Palacios, who was unable to travel due to a visa issue. Instead, he had Bobby Villaver, a Hawaii based mentor to Palacios, in his corner.

“Of course I will not agree about [the decision] but the best thing to do is accept,” said Palacios. “We already knew that if the fight will go the distance they will win.”

The fight was televised in Puerto Rico by Wapa Deportes but was not shown in the United States or Philippines.

Saludar entered the fight rated no. The other two reigning titleholders at 105 pounds are Wanheng Menayothin (WBC) and Knockout CP Freshmart (WBA), both undefeated and from Thailand. The Philippines will have another titleholder at 105 pounds shortly when the vacant IBF title is contested for by Samuel Salva and Pedro Taduran on September 7 in an all Filipino title fight.